Suzanne Pletcher is Director of Communications for the Southwest Energy Efficiency Project (SWEEP), where she works to share SWEEP’s marketplace analyses and support proactive public policy in the region. She is an award-winning public relations and investor relations professional and former journalist who founded the Boulder County Business Report in Colorado.

Electric utilities across the country are investing in energy efficiency more than ever before. But what’s the broad return on those investments? 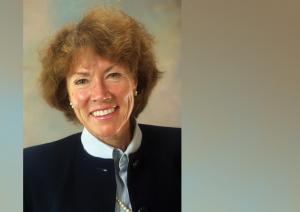 If the benefits from investments during 2008-2015 in the Southwest are any indication, those utilities are entitled to a bit of chest pounding.

The Project’s utility program staff crunched the numbers from the most recent eight years of annual reports of the major utilities in the region. They produced a benefits overview and individual fact sheets for Arizona, Colorado, New Mexico, Nevada and Utah.

One key finding: The southwest region saw more energy savings generated from utility energy efficiency programs as of 2015 than was generated from solar power facilities, including both distributed and utility-scale. 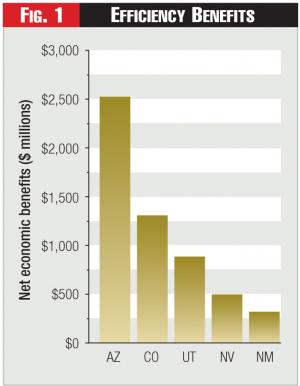 Another key finding was that customers saved a whopping 5.5 billion dollars from programs offered during the eight-year period, according to the utilities’ own data. 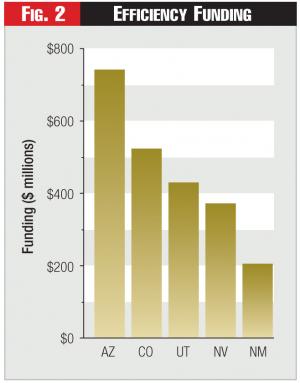 Carbon dioxide emissions fell by an estimated nine million metric tons in 2015. That’s the equivalent of taking about 1.7 million typical passenger vehicles off the road.

These reductions improve public health and, an important factor in the Southwest, reduce haze in national parks and monuments. They are the crown jewels of the region in terms of both natural splendor and local economies.

An estimated six billion gallons of water used for power plant cooling was saved. This is a critical benefit in the arid Southwest.

And utilities in the region avoided having to build seven new baseload power plants of three hundred megawatts each. Also, customers won’t have to pay for them or the associated transmission infrastructure.

While the details vary, these broad benefits from the Southwest apply in many other states. But some states, including Wyoming, are lagging.

It’s been a long process of planning, utility commission approval and program management. It’s nice to step back, crunch the numbers, and learn there’s a quantifiable contribution that energy efficiency investments provide to utilities, their customers and communities.