C.E. (Gene) Carpenter, Jr. is a doctoral candidate at the George Washington University’s (GWU) Columbia College of Arts and Sciences. Jeffrey W. Comer is a graduate student at GWU’s Elliott School of International Affairs. Eric Lausten earned his MA degree from GWU in May 2009 and currently serves as legislative director for Congressman Dan Lipinski. Carpenter, a staff member in the Nuclear Regulatory Commission’s Office of Nuclear Regulatory Research, authored the two-part article, “Memo to the President-Elect,” which appeared in Fortnightly’s November and December 2008 issues. The authors acknowledge the assistance of the National Oceanic and Atmospheric Administration, Lockheed Martin and GWU Professor Nicholas Vonortas.

Fortnightly Magazine - October 2009
This full article is only accessible by current license holders. Please login to view the full content.
Don't have a license yet? Click here to sign up for Public Utilities Fortnightly, and gain access to the entire Fortnightly article database online.

According to the National Renewable Energy Laboratory,1 60 million square kilometers (23 million square miles) of tropical oceans daily absorb solar radiation equal in heat content to about 250 billion barrels of oil (e.g., 1,450 Quads). This is an order of magnitude greater than the expected total U.S. energy consumption through 2030, and twice the projected global energy demand. Even using present maximum estimates for steady-state sustainable energy harvesting2 (e.g., 3 to 5 TW, or 90 to 150 Quads), this resource still provides enough clean and non-GHG emitting energy to supply 15 to 20 percent of the global energy demand in 2030. 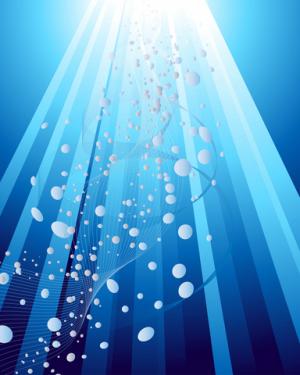 Ocean thermal energy conversion (OTEC) technologies convert the solar radiation that heats the surface of the ocean into electrical power by exploiting the thermal gradient temperature differences between the surface and the depths. This temperature gradient in the Tropics (see Figure 1) can be 20 degrees C (36 degrees F) or more between the warm surface water and the cold deep seawater, which is sufficient to produce usable power, albeit not very thermodynamically efficiently (i.e., 3 to 5 percent). It should be noted that lying within the Tropical zone——the area most favorable for OTEC—are some 29 territories and 66 developing nations, as well as portions of Australia and Hawaii, all of which are natural markets for OTEC-generated energy and other side-products.