Wireless technology marks a big part of our life today. We use it when we scour our phones for voice, text, or interesting video tid-bits, and as we log on for important messages from home or office.

Yet many other functions that we take for granted now have proliferated. That garage-door opener, that TV remote control, that Internet of Everything - all are enabled by wireless sensors that are getting smaller, smarter, cheaper, and more nimble. The utility industry also has benefitted, but in a more surreptitious manner: the technology has enabled very accurate equipment health monitoring in ways that were not done before nor contemplated.

When wireless technology was introduced in the 1980s - remember those brick-sized phones? The bandwidth capabilities for data (the amount of information that can be pushed through per unit of time) were more than adequate for industry applications for condition monitoring. Whereas for voice information verbal drop outs give a choppy feeling to conversations, for data the information could be simply resampled since there was no hurry to get real-time information. Even as the alphabet soup of wireless standards evolved, the potential for utility application only grew, from measuring vibration of rotating components to on-demand sensing of components. What was missing then was the whole package: flexible networks to be able to deploy in field conditions, economy and security. Today wireless sensors are widely used in a variety of applications from traffic management to home security to automated gas, water and electricity meter reading to equipment condition monitoring in industries. Indeed this is what could save utilities in curbing operations and maintenance costs with potentially 24/7 monitoring and avoiding costly unplanned shutdowns.

What is a Wireless Sensor Network?

WSNs are a boon to utilities even as they adapt to business demands for more and more strategically placed remote assets which are very unlike legacy equipment. These include solar systems, fuel cells and other distributed generation technologies that are reaching grid parity and providing customer choice like never before. Utilities were always reluctant to monitor the health of their assets due to cost concerns but also for reasons that drove utility behavior for many years: if you monitor you must report and sometimes bear onerous legal consequences for potential miscalculations. So the head-in-the-sand attitude was painless during years of high growth, easily passing increased replacement costs of equipment to rate payers through a friendly PUC. That of course changed in the late 1990s as economic realities became clear and competition in the industry intensified. But there were simpler economic issues militating then against using sensors to alert plant operators on equipment health. Apart from the unreliability of the-then new sensor technologies, the cost of new cabling in a power plant was averaging from $200 to $1,000 per foot; much of the costs were related to assuring proper regulations were met. Wireless means to avoid cabling were of course desired, but neither the standards nor the means were proven.

Wireless technology has had a rich history, mainly spurred by World War II advances via radar and sonar. An invention called spread spectrum patented in the 1940s by Hedy Lamarr - the famous actress who was dubbed the "most beautiful woman"1 - continues to be the backbone of wireless secured communications. But it remained in the realm of defense needs and not for consumer applications. Through the past decade there were advances in semiconductor and material sciences and in network protocols, creating products that are more flexible to deploy, low cost and rugged to withstand extreme environmental conditions. Today the same spread spectrum technology is used in secure wireless communication and able to reach remarkable speed of information transfer. 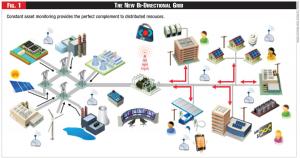 Breaking down the tradeoffs in WSN deployment requires a broad range of specialties within a single organization - and not easily found in a utility - including energy storage, wireless networking protocols, semiconductor design and sensor/actuator technology. Some of the most exciting advances in WSN that make it attractive for industrial and specifically utility applications is in flexible network topologies and energy storage and energy "harvesting" methods.

Network topologies have graduated from one- to two- to multiple-way communications, by using mesh networks. For example, a wireless home lighting application exceeds dozens of lights and sensors. A Wi-Fi router - that gizmo so commonplace at American homes - is frequently unable to provide whole-house coverage due to multipath propagation or shadowing, but a mesh topology ensures a robust connection to all locations in the house with lowest cost-per-node. Mesh topologies are "self- healing", the ability of another node taking over for an active node that may have been disrupted, either accidently or on purpose, an important feature when deployed in difficult to access locations and for security applications.

Energy harvesting to deliver power to the sensors at all times (not needing to rely on batteries) provides a very useful feature. For sensors in power plants lie in close proximity to components with high kinetic energy, high temperature, and rapid flow; to harvest power for these devices is comparatively easy. So with these features accessible to utilities, it was not long before they took the plunge.

Wireless Applications in the Power Industry

In 2002 the author worked with the first utility in the United States ever to implement wireless sensor technology at one of their operating units. The initial challenges were many; very few were connected to the technology itself but more to security and safety concerns. The safety issue was most paramount. The utility assured stakeholders, regulators and plant staff that the impact of these networks on electronics of operating equipment in its vicinity were documented in guidelines developed by EPRI2 and that all these standards would be met. Another key issue that arose was the impact of drive-by security compromises. The utility assured that the intent was to monitor and not control operation of equipment.3 So having the IP address would allow only the raw data to be viewed by the intruder - avoiding any consequential impact on plant operations. Of specific concern to the utility were the more critical and more risk-prone rotating equipment, which were not being monitored with wired sensors. Wireless technology could open new doors for on-demand sensing and lower utility risk. The plant installed 55 wireless sensors on generation-critical equipment, including pumps, motors and turbines. The sensors monitored vibration and other parameters and transmitted the data wirelessly to access points in the plant that were linked to a fiber optic backbone. This backbone was tied to the plant site's local area network, enabling plant technicians to access the sensor data for predictive maintenance analysis.4

The system has been expanded since that early testing and is working reliably in other plants in the utility's portfolio. Some of the advantages cited by plant workers were the expected comments on flexibility, on-demand sensing capabilities, and less-bureaucratic procedures to authorize wireless monitoring. However, some of the comments stressed the "quality of life" issues. For example, one worker cited the sheer relief that he did not have to drive several miles over the weekend when he could simply examine the secure wireless sensor output on his laptop while at home, share with his supervisor, and resolve the issue. In his words, "it did not ruin my weekend."5

In 2003 under a more ambitious project, the author was engaged with another U.S. utility to explore the possibilities of advanced condition-monitoring software with data acquired from wireless vibration sensors to improve capability of detecting early equipment damage. The wireless sensor was to augment other wired sensors that measured process conditions but were not available to measure vibration data. The results showed that vibration magnitude data can be modeled with correlated process variables to detect failures with early warning. Initially in this study, currently available process variable signals were used to model and monitor a coal pulverizer. The results identified a need to consider vibration signals in order to capture more failure modes. Vibration signals provided by a wireless network, in combination with the existing process signals, significantly increase the ability to provide valuable early warning. Results also indicated the ability to differentiate between sensor anomalies (that is, drift, sensor failure, and the like) and mechanical faults, such as those from the bearings on the pulverizer and motor. The combination of vibration signals and process variables, when monitored by the predictive monitoring system, increased the number of detectable failure modes from 11% to 46%. The value proposition was that the technology was capable of achieving up to 12 hours early warning of impending failure.6 And the key was monitoring a critical component with existing wireless technology.

New operational scenarios have required abilities to monitor the mechanical strain on critical components due to flexible operating requirements of normally base-loaded plants. Wireless sensor technologies have been implemented at operating plants at utilities to assess if strain measurements from hard-to-access components can be quantified and correlated with plant operational cycling.

Distributed generation assets are most requiring (and most amenable) to continuous monitoring. As solar- and wind plants are intermittent generation sources with dramatic changes in output, there may be need for "fly-by-wire" controls, whereby the parameters of the energy collection are adjusted constantly to optimize and maximize electricity output. For example, solar panel outputs are aggregated, but not on the scale that can be done with enhanced communication. The aggregation can be performed with individual panels or with geographically separated solar resources providing higher capacity credit at significantly lower costs. WSNs will be the key to achieving these goals.

Technology innovation will continue to be a key enabler for utilities as they strive to prolong aging assets with increased monitoring for plant health, as well as to implement new technologies to increase customer engagement and regulatory requirements. In addition, newer, more mobile and cleaner generation technologies are now more prevalent, requiring a "re-think" on how best to adapt the existing business model to new realities. Coupled with greater pressures on financing and on maintaining electricity rates low, utilities will be challenged to be flexible and nimble to meet customer needs.

The traditional command and control structure of vertically integrated utilities that was once unidirectional in the flow of power and in communications is fast transforming to bidirectional power and communication flows-distributors and third parties participating in smaller distributed resources on the grid (Figure 1). The assets will include legacy systems, large centralized generation resources and newer generation technologies whose contributions are expected to be more intermittent with dynamic capacity factors less than available from traditional sources. More importantly there will be customer-centric needs as yet not well documented on their impact on load management. Monitoring all your disparate assets becomes paramount to constantly assess the capacity as well as weakness in the production chain. Even today some of the larger utilities are completely in the blind about their most important transmission assets during inclement-weather conditions. WSNs will provide the perfect complement to assure that these disparate sources and assets can be managed prudently to maintain O&M costs down.

And we can look forward to a future when the software for analyzing signals and making decisions may all reside on WSN. That would require a library of "fault" signatures for various components. When coupled with the operational history, the algorithms may be used to developing component remaining useful life (RUL). The prognostic capability is sure to tie in all parts of the enterprise, from Supply Chain to Operations and Maintenance and Procurement.

3. To this day, this assurance is the key factor in easing the path for wireless sensors but sometime in the future wireless control of components will be practical.