Seeking a rate design that recovers costs fairly from customers with rooftop solar.

Mark Lively provides consulting services for pricing of electricity and natural gas, through his firm, Utility Economic Engineers. Reach him at MbeLively@aol.com. Lori Cifuentes is Manager of Load Research and Forecasting for Tampa Electric Co. Reach her at llcifuentes@tecoenergy.com.

In the U.S., most residential customers of electric utilities are on a consolidated tariff that collects revenue based on a fixed monthly fee (often called a customer charge) and a commodities charge (an energy or kWh charge). The fixed monthly fee is generally designed to recover metering and billing expenses. The commodities charge is designed to recover expenses associated with the supply of both energy (kWh) and demand (peak kW). 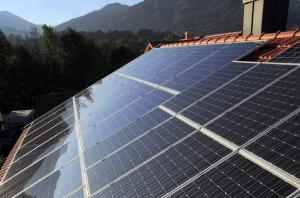 For electricity, fuel costs are a large component of the energy expense. Fixed costs related to the infrastructure investment to provide central station service to the customer are a large component of the demand expense. However, there is often disagreement about whether some of the traditionally classified energy costs should be reclassified as demand and vice versa.

The growth of rooftop solar is dramatically reducing the amount of energy that goes through residential utility meters from the utility to the customer. Indeed rooftop solar often reverses the flow, such that many rooftop solar residential customers deliver energy to the local wires company during some periods of the day. In Washington, D.C., the mayor has a vision to reduce energy consumption by 50% and to have 50% of the remaining energy produced by rooftop solar.

Under conventional ratemaking, PEPCo, the D.C. utility, would need to increase its commodity charge by a factor of four (4.0) to overcome such a reduction in energy sales. The rationale for this assertion is that PEPCo's revenue needs would be unchanged to pay for the wires it will still own, wires that will still provide service to the customer, while the commodity through the wires would be reduced to 25% of the level which was used to set the current commodity rate level. The result would be non-generating residential customers paying high rates (and higher bills) in order to subsidize the lower bills paid by residential customers who decide to install rooftop solar.

A Demand Charge as Remedy

A remedy to this "death spiral" rate outcome is the introduction of a demand charge for all residential consumers. Even customers who wish to reduce their carbon footprint with rooftop solar still will need to receive some electricity from the utility grid from central station generating units. Some of that electricity will be for periods when the sun is not shining (i.e., at night) or is low in the sky in the early morning or evening. Some of that central station electricity will also be needed to meet customer load in excess of the capacity for the solar rooftop unit's capacity to meet that load. Of course, if the rooftop solar unit is damaged or out for maintenance, power will be needed from the grid as a standby resource to backup the output. Implementation of a demand charge will reduce the subsidies that standard residential customers would otherwise pay to support the installation of rooftop solar.

With respect to design of a demand charge, there are a myriad of options available. One might have the residential customer specify the amount of standby power desired. Utilities have historically used such specifications by larger, more sophisticated, commercial and industrial customers to set a contract capacity. A slightly different concept is the measured demand charge, where the customer's metered maximum power consumption is used in place of a contract capacity or perhaps in conjunction with the contract capacity. The great expansion in the installation of Advanced Meter Infrastructure (AMI) by electric utilities in recent years can provide metered demand data for residential customers, demand data that were not previously available when the most ubiquitous residential meter was a mechanical energy meter.

The uniformity of the amount of revenue collected under these three rate designs is consistent with the way utilities are regulated. Prices are set such that the revenue under a particular rate design will produce the revenue target. The utility would nominally be indifferent under the three rate designs were it not for the fear of a decline over time of total revenue, the "death spiral" mentioned above.

The utility providing the load research data also has an active rooftop solar program, with 344 customers. The customers effectively have the same AMI information as is provided for the load research meters, plus information on the energy occasionally delivered by such customers to the utility. The billing determinants for these rooftop solar customers can demonstrate the size of the subsidies such customers are receiving from standard residential customers, as is developed in Figure 2.

The unit prices in Figure 2 are copied from Figure 1, where they had been calculated. The billing determinants in Figure 2 are for the utility's delivery to the residential rooftop solar customers. 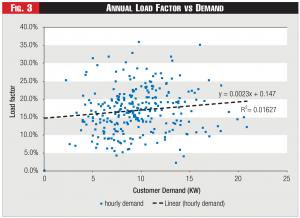 The subsidies occur because utilities incur fixed infrastructure costs to serve their customers based on the capacity they must build to be ready to provide service at any time while most current residential rates are designed using only a commodities charge. This historical design paradigm arose from two factors. First, prior to AMI, there was a substantial difference in cost between energy only meters and demand billing meters. Energy meters, being substantially lower in cost to install and read, were utilized for residential consumers whereas more costly demand billing meters could be justified for larger sized commercial and industrial customers. Second, historically utilities assumed that residential customers had similar load factors (actual energy consumption as a percentage of potential energy consumption under the monthly peak demand) and thus would make a demand rate versus an energy rate to be equivalent in collecting revenue from any group of residential customers. Variation in load factor for commercial and industrial consumers, as well as the ability to absorb the higher cost of demand metering versus their typical bill, justified application of demand billing for those customers.

Figure 4 adds data from rooftop solar customers. The added regression line (solid black line) indicates that the load factor for this group of customers is also almost random relative to the size of the residential customer with rooftop solar. The more significant feature of the regression line is that the rooftop solar customers have a lower load factor than do the customers in the load research sample, a zero intercept at 10.85% versus 14.70%. The 3.85% differential slowly closes as the size of the residential customer gets larger, but again, the degree of closure is not significant. 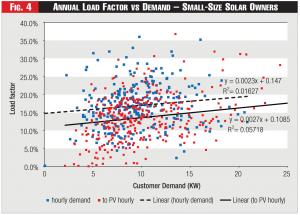 Figure 5 presents the same data as Figure 4 except that range of the plot is allowed to show rooftop solar customers of all sizes, instead of being limited to the range of smaller-sized customers that is plotted in Figure 3. This indicates a seeming size bias in those customers who have opted for rooftop solar. There are some very large rooftop solar customers, customers of a size not sampled in the load research program. An implication is that the subsidies identified in Figure 2 are often going to very large residential customers at the expense of smaller residential customers.

The data used in Figures 1 and 2 and presented in Figures 3, 4, and 5 are for all residential customers, including mobile homes and multifamily homes. Restricting the analysis to single family homes demonstrates the actual subsidy is likely to be much higher than the 17% and 7% shown in Figure 2, rising to 24% and 13%. The average annual peak demand for the load research sample is 9.56 KW versus 10.41 KW for the rooftop solar customers. This is the reverse of the size comparison on an average usage basis. For the monthly peaks, the comparison is 82.22 KW versus 82.31 KW. Again, the monthly peaks are the sum of twelve monthly peaks while the annual peak is the single annual peak for each customer.

Rooftop solar residential customers who receive net metered service from their local utility on an energy basis are being subsidized by non-generating residential customers. The subsidies arise because their utility incurs fixed costs for customers based on the demand they impose on the network, whether just for that utility's distribution function or for the bundled functions of generation, transmission, and distribution for a utility that remains vertically integrated. 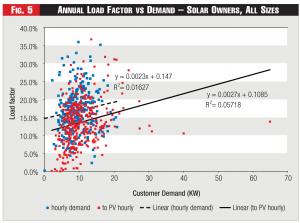 Utility load research data can be used to estimate the size of that subsidy by constructing test demand rates for this class of customers, test demand rates that recover the same revenue requirement as the current commodity rates recover. Applying these alternative test demand rates to billing determinants for rooftop solar residential customers is expected to produced increased revenue from such groups of customers by a range of 7% to 17% depending upon the choice of billing demands, monthly versus annual. The individual impacts will depend on customer load factors and the energy production factors of the rooftop solar units.

Applying such alternative demand rates for all residential customers would be an alternative to charging a special fee only to rooftop solar customers, reducing the charges of bias that have been leveled against some utilities for imposing such special fees. This demand rate solution would continue the standard approach of using a single rate design construct for all residential customers and address any charges of unduly discriminatory pricing for customers with rooftop solar.