Ed Cazalet is Vice-President and Co-Founder of MegaWatt Storage Farms, Inc. In 2004 he was appointed by California Governor Schwarzenegger to a three-year term on the Board of Governors of the California Independent System Operator, and served previously as CEO of APX (Automated Power Exchange).

Goals and mandates for renewable are growing by leaps and bounds. One hundred percent for Hawaii by 2045; seventy-five percent for Vermont by 2032; fifty percent for California by 2030;1 eighty percent for Germany by 20502 - all are in place. And these long-term goals are supported by interim goals for 2020, 2025, etc. Many other countries and U.S. states have adopted renewables goals nearly as aggressive. 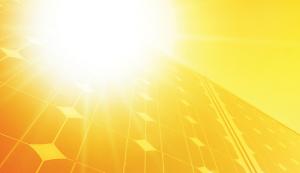 Improving market economics also are in play in driving rapid solar adoption. We've seen utility-scale solar photovoltaic (PV) projects with contracts for less than four cents per kWh ($40 per MWh).3 This price undercuts even the total operating and capital costs for fossil generation fired by natural gas. Sometimes it runs less than just the operating cost of gas generation.

Meanwhile, rooftop PV solar generation (supported by net metering policies) is growing rapidly and stressing the distribution grids in some locations. The situation will soon become even more challenging, especially in areas such as Hawaii and California where retail electricity rates are relatively high. In Hawaii, some homeowners have been prevented from interconnecting more rooftop solar because of overgeneration. These bans prevent users from escaping high-cost monthly utility bills. Voters become irate. They begin to put political pressure on their public utility commissions (PUCs)to break the logjam.

For all these reasons, utility executives and PUCs should plan now to handle extensive solar penetration, including the significant overgeneration that can occur at mid-day.

California presents a good case study to illustrate the problem. The Golden State already is facing stresses from high solar. In fact, California Governor Jerry Brown has signed a bill4 mandating by 2030 that 50 per cent of the load served by electric utility resources must originate from renewables. In other words, this 50 percent under this new renewable portfolio standard (RPS) will come on top of hydroelectric generation and renewable energy provided independently via rooftop solar owned by retail customers. 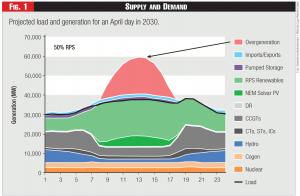 We see three basic ways to deal with overgeneration:

Let's consider option no. 3 - the use of energy storage to deal overgeneration. How much storage would we need in California to achieve 50 percent renewables?

Figure 2 is the same as Figure 1, but with a box that illustrates what happens if storage is charged at 10,000 MW for six hours, producing 60,000 MWh of energy, and if that energy (less losses) is then discharged in the evening and morning to displace gas-fired generation and reduce greenhouse gas (GHG) emissions. The box is intentionally sized to consume only a portion of the overgeneration. We assume that load management and a modest curtailment on high-output/low-load days will address the remaining overgeneration. 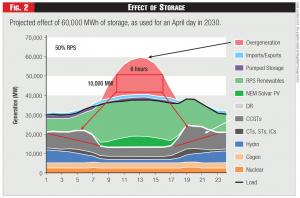 Here's the key point: California by 2030 will require 10,000 MW of long-duration storage able to support six hours of discharge, representing about 60,000 MWh of energy storage capability. The requirement for a six-hour duration of storage discharge is driven by the number of hours of high solar generation and no other assumptions.

There are two commercially viable long-duration storage alternatives that can be developed at the required scale: pumped storage and battery storage.

Pumped storage plants have long lifetimes. However, they often suffer from long lead times (a decade or more) for permitting and development, making for uncertain development costs. They typically require specialized, usually remote, locations. New transmission lines often must be built to connect the remote pumped storage to urban centers. Transmission lines can be politically difficult to build - in California, lines can take a decade or longer to permit and construct. A further consideration in western states is that pumped storage uses a lot of water, primarily from evaporation, and water is an increasingly scarce and precious resource. Dam safety can be an issue for some projects.

Pumped storage generally takes the form of a single large installation built as an all-or-nothing proposition. Typical sizes range around 1 GW6 or about 10 GWh. Because of the long development times and political uncertainties of pumped storage projects and their transmission lines, cost overruns present a major risk. The projects typically are sized to meet needs decades out, resulting in low capacity utilization during early years. Also, the entire capital expenditure must be made before the pumped storage delivers any value. 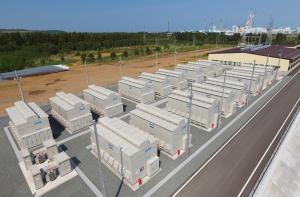 By contrast, batteries can be deployed wherever they are needed, when they are needed, and in precisely the number of MW and MWh needed, from 1 MWh or less, to 10 GWh or more. Deployment times can run much shorter than a year. New transmission lines generally aren't needed. Long-duration batteries can be connected anywhere on the distribution grid or transmission grid where there is high penetration of solar.

Battery projects thus exhibit very high degree of flexibility, which adds value and reduces risk. Moreover, battery costs are declining. So rather than the high risk of cost overruns of pumped storage, battery projects deployed over time will likely see significant cost decreases for incremental MWh installed in later years. Battery lifetimes of 15 years are realistic for some technologies and at that point a new set of batteries can be installed in the project site for another 15 years of operation. If battery costs decline significantly so that end customers buy their own storage and depart from the grid, then pumped storage project costs may be difficult for a utility to recover, even if it is in rate base.

A third, less commercially viable choice for long duration energy storage is compressed air energy storage (CAES). There are two CAES plants in operation (Germany and Alabama USA). Both are one-off custom designs, many years old. Both of these CAES plants use compressed air to boost generation of natural gas generators, and therefore emit greenhouse gases. As a result, natural gas CAES represents a poor choice for storage for a renewables-intensive, low GHG grid (such as California) that requires an 80-percent reduction in GHGs by 2050. Adiabatic CAES that does not use natural gas generators has been proposed, but has not yet been deployed in multiple projects at scale, so it remains a high-risk technology choice. An additional major risk factor for both types of CAES is that testing an underground cavern for a leak-proof air storage site costs millions. Many promising sites fail the tests. 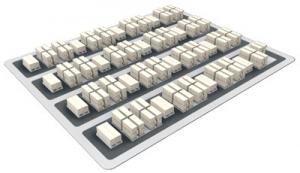 Pumped storage and long-duration battery storage are both proven technologies. Pumped storage was first used in the 1890s7 and the first battery systems were used as far back as the early days of DC-powered grids.8

Pumped storage is by far the most common long-duration storage technology, with 127 GWh operating in 2009.9

The battery technology with the most extensive grid experience is sodium-sulfur10. Hundreds of sodium-sulfur projects have been deployed over the last two decades, totaling more than 3700 MWh (530 MW - all systems have six or more hours of storage). The specified lifetime of sodium-sulfur batteries of 4,500 equivalent full cycles or 15 years (whichever comes first) has been proven by systems in the field.

Lithium-ion batteries are now in commercial operation for short-duration applications (15 minutes to 2 hours). Li-ion projects for long-duration applications with daily use cycles are much less common, although there are a few. Grid-scale deployments of Li-ion are limited and few are old enough to have demonstrated their specified lifetimes (typically 5 to 15 years.) 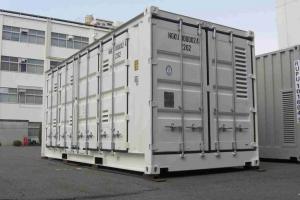 Li-ion has extensive field experience in very small-scale applications like consumer electronics (e.g., cellphones and laptops), and is currently accumulating extensive field experience in electric vehicles. However, grid scale storage for management of overgeneration is more demanding since daily cycles are common, which means about 300 cycles per year. In contrast, an electric vehicle with a 200+ mile range may do an equivalent of a full cycle only once per week, or 50 full cycle equivalents per year. The daily cycling of a grid overgeneration application would therefore, in just one year, place as many full cycles on the battery as 6 to 7 years of driving.

Both sodium-sulfur and Li-ion batteries can be manufactured at a GWh-scale that can supply the many GWh of storage that will be needed to address overgeneration. Sodium-sulfur manufacturing capacity grew to a GWh/year capacity in 2008. Tesla's GigaFactory is expected to start volume production in 2017 and full-volume in 2020, and many other Li-ion manufacturers are in volume production today.

Flow batteries remain in a comparatively early stage of commercial development, with only a handful of long-duration installations deployed over the last decade or so. To date, there are no GWh-scale manufacturing plants in production for any flow battery technology.

If a grid with a high intensity of renewables is to rely on storage to solve the overgeneration problem, then the type of storage used must be commercially viable for grid-scale operation.

Consider four factors that can be assessed in determining whether a storage product is commercially viable:

Recent announcements by Tesla for its utility-scale storage indicate a cost of $250 per kWh. That marks a reduction for Li-ion from about $1000 per kWh a few years ago.11 It is unclear from these statements whether power conversion, communications, installation, warranty, and service are included in these costs.

The Japanese government has a program to reduce the cost of sodium-sulfur and flow batteries by 2020 to 23,000 yen (about $200 per kWh at 2015 exchange rates), which is less than the typical cost of pumped hydro plants.12 As with Li-ion batteries, this cost likely does not include power conversion, communications, installation, extended warranty and service.

One of the advantages of focusing on long-duration battery storage is that almost all battery technologies can compete to provide kWh of storage: sodium-sulphur, Li-ion and flow batteries, thus ensuring the lowest cost of storage. For short-duration storage of an hour, the competition presently limited to Li-ion batteries.

The cost of different battery storage systems can be compared using a quick calculation. Take the $/kWh of the storage and divide it by the lifetime number of cycles to get the cost per discharged kWh for the storage capex. For sodium-sulfur, rated and proven to deliver 4500 full discharge cycles over its 15-year life, the calculation with the above projected 2020 cost will run like this:

In addition, costs for site development, power conversion, financing,  charging, and roundtrip-efficiency would need also to be factored in to get an all-in cost for every discharged kWh. In some cases the storage might share the project site and power conversion equipment of a solar array, and use charging power that otherwise would be curtailed and hence is effectively free. In terms of real-world deal prices, and as noted earlier, utility solar prices without storage have been reported at less than 4 cents per kWh.13 Solar plus storage for firming has been signed at under 14.5 cents per kWh.14

The vast majority of deployed energy storage is long-duration, and a growing number of storage projects are directly related to the integration of renewable energy. Figure 3 shows a 245-MWh (34 MW for 7.2 hours) sodium-sulfur battery that has been operating since 2008 at a wind farm in Northern Japan. This area of Japan requires that wind generation be dispatchable across many hours, which is achieved by the battery system.

Figure 4 shows the layout of what will be the world's largest battery farm when it is energized in April 2016. This planned installation represents about a 300-MWh (50 MW for six hours) sodium-sulfur based project on about 3 acres. This battery project employs 252 of the 20-foot containers shown in Figure 5, each of which is rated at 1.2 MWh. Note that this density of about 100 MWh and 16 MW per acre compares to solar generation density of 0.14 MW per acre.15 It doesn't take much incremental space at a solar farm to add sodium-sulfur storage for overgeneration and other uses.

Short-duration storage (a one-hour discharge) can also play a role.