K Kaufman is communications manager and John Sterling is senior director, research and advisory services, at the Solar Electric Power Association. John Pang and Chris Vlahoplus are partners at ScottMadden. The authors thank Bob Gibson at SEPA and Paul Quinlan at ScottMadden for their input, insights and feedback.

The changes underway in Hawaii today are sending a clear message to the rest of the United States on what to expect tomorrow: As distributed and renewable energy choices become widely affordable and accessible, the status quo in the electricity market can change quickly. Utilities and regulators can either get ahead of the wave, with a focus on customer expectations and new ways to manage the grid, or risk the wave getting ahead of them. 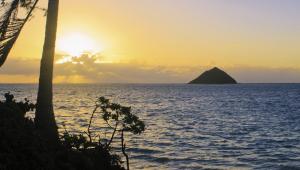 In late September 2015, the Solar Electric Power Association (SEPA) and the energy consulting firm, ScottMadden, led a group of 20 utility and solar industry executives on an industry fact-finding mission to Hawaii. With leaders from mainland investor-owned utilities, municipal utilities, and electric cooperatives, the group spent four days immersed in Hawaii's dynamic solar market, listening to and learning from the experiences of the islands' utility executives, policy makers, and solar and clean tech market players.

An overview of the unique characteristics of the islands' energy system and solar market is important for a better understanding of the Hawaiian experience. Key characteristics include the following geographic isolation, high energy prices, and high penetration of renewables.

Hawaii consists of six main islands located more than 2,000 miles from the U.S. mainland. With no electricity interconnection between islands, each island must be energy self-sufficient. System stability is a key issue, as a forced outage at a single plant can have a much greater impact on system reliability. Even before the growth in renewables, it was common to have multiple load shed events in a year. Lacking interstate connections, Hawaii is not subject to federal or other national grid regulations. Consequently, reliability and power frequency standards are based on a wider range of allowable limits compared to mainland grid standards. This dynamic also allows electric utilities to be more flexible and open to risk and experimentation. 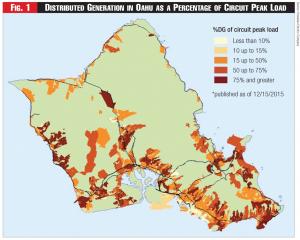 In addition to high energy prices, Hawaii has a high penetration of renewable technologies. Hawaii has one of the highest renewable energy penetration levels in the United States. In 2014, non-hydroelectric renewable resources accounted for 16% of electric generation. On the island of Oahu, which is served by the Hawaiian Electric Company (the state's sole investor-owned utility), 30% of single-family homes have rooftop solar-20 times the national average. The Kauai Island Electric Cooperative serves the island of Kauai and faces a similar situation. The utility receives 60% to 65% of its regular daytime demand from solar, with utility-scale providing a notable portion of this generation.

The group came away with a series of insights on managing the transition to the electricity market of the future. Teasing out the opportunities and challenges of this unique environment, trip participants identified key lessons for electric utilities in three categories: operational and technical issues, customers and stakeholders, and leadership.

Hawaii's electric system is being stretched beyond what engineering experts initially thought possible. The high penetration of distributed solar has had a significant impact on the behavior of distribution circuits, with reverse power flows becoming the new normal. On Oahu, more than 50% of distribution circuits are loaded above 75% of daytime minimum load (DML) and 12.5% are above 250% DML. Distributed generation on Oahu commonly exceeds 75% or more of peak load on many circuits (see Figure 1).

Despite the high penetration of renewables, the system is not in collapse. How is Hawaiian Electric managing the situation?

Reliability has decreased somewhat with the high penetration of rooftop solar; however, many of the reliability and power quality issues remain at the system level rather than circuit level. Specifically, frequency control and system inertia were identified as arising challenges that must be addressed due to the significant amount of variable nondispatchable generation on the grid.

Greater penetration of distributed solar is being accommodated, in part, through a more refined approach to system planning, focused on what Hawaiian Electric's officials call "hosting capacity." Instead of relying on simple rule-of-thumb metrics like DML, the Hawaiian utilities model the specific characteristics of each circuit to more accurately determine hosting capacity-that is, the amount of distributed generation that can be safely interconnected. This process allows identification and focused management of circuits that have the potential to cause issues for the broader system, and as a result, the utility is able to accommodate greater amounts of distributed solar. To manage system disruptions, better modeling is needed in both Hawaii and the mainland in order to determine if a circuit would be producing power or drawing load.

Another strategy for incorporating distributed generation is to focus on making it a much less passive resource on the grid. This is being accomplished through the use of smart inverters, load management, and storage. Inverters with smart logic are being used to create better power behavior across the system. This technology has proven flexible; for example, in one instance, software for 800,000 inverters was updated in a single day.

Detailed analytics and technological capabilities have allowed the grid to interconnect more distributed resources than originally envisioned. Mainland utilities should begin to re-evaluate what is technically feasible on their systems.

The rapid growth of distributed solar in Hawaii was driven by a strong customer desire to lower electricity bills. Other stakeholders also recognized the immediate economic and environmental value of directly offsetting oil use. Declining solar costs supported by generous state and federal tax credits along with new third-party financing models created a great opportunity for solar development.

And solar developers stepped in quickly. Meanwhile, the utilities did not move at the same pace for a number of reasons. First, all parties underestimated the potential speed of rooftop solar adoption. Second, constrained by the traditional regulatory and planning processes, the utilities were slow to develop and gain approval for options for their customers.

As a result, utilities had to play from behind. The fast-moving market allowed little time for proactive planning; it was learn as you go. What appeared to the utilities as a prudent approach to risk may have appeared as a "no" to the customers.

At the same time, third-party developers were often going door-to-door and having front porch conversations with customers, which allowed them to get between the electricity customer and the utility. Effective communication with customers is critical to maintain the level of trust between the utilities and their customers and regulators.

A utility that emphasizes limited system capabilities risks losing credibility with customers and regulators when high renewable penetration becomes a reality. In retrospect, the utilities would have been better served by a "yes, with..." approach, which would allow them to clarify customer and regulatory goals and better explain what would be needed to achieve these goals. Such a strategy would have permitted the growth of distributed solar while ensuring appropriate investments in system integrity. The utility would have been better aligned with customers' desires and better able to test and improve the electric system as needed.

Managing any change can be a challenge for large organizations, particularly a utility that has run on a traditional business model for more than 100 years. In order to successfully transition in a changing marketplace, the Hawaiian utilities were faced with a need to develop and implement a clear vision to realign their organizations and break down silos.

But organizational realignment takes time. As an example, the rapid expansion of distributed solar resulted in exponential growth in interconnection requests and taxed Hawaiian Electric's ability to keep up. Significant changes to internal processes and organization were needed to meet demand, and the resulting response rate led to customer and regulatory frustration.

To change the conversation, in such situations, electric utilities must have a focused vision for moving forward, and communication from leadership down the organization ladder and to customers, regulators, and other stakeholders must be clear and unified. In the absence of a utility-led conversation on issues like distributed solar, third-party providers can have a disproportionate share of voice. The Hawaiian utilities have recognized this challenge and are actively adapting, including making modifications to the interconnection process and improving communication and collaboration across business functions.

Operating in this environment requires a different model-test and adjust, rather than prove and deploy. Similar to storm response, a utility may not know all of the issues, but relies on commitment and ingenuity to actively manage the situation. In the case of renewables, pilot projects have been a critical tool, allowing Hawaiian utilities to innovate and test new ideas. While different from the traditional regulatory model, such an approach to change, incorporating clear checkpoints and milestones, might be necessary if utilities are to succeed.

Proper internal alignment will also allow an organization to partner with other service providers, test new technologies, and be responsive to customers' interests. Mainland utilities should prepare now to realign their organizational cultures and communications strategies.

Hawaii will continue to write postcards from the future, as utilities there continue to interconnect renewable resources and improve operational efficiencies. The expertise and insights gained in the process will be critical if the utilities are to achieve 100% renewable energy by 2045.

In addition to operational and technological issues, Hawaii's electric utilities will continue to expand the services they offer their customers. A senior executive at Hawaiian Electric told the trip participants, "We're looking to give our customers more options-products and services-to help them save overall, so they see us as more than just a company for turning on their lights and paying their bill. That includes a smarter grid, more renewables, more transparency, and better communications, so they eventually look at us as an enabler of an energy value proposition." Interestingly, the same concept came up in Germany on SEPA and ScottMadden's 2014 fact-finding mission, when a German utility leader remarked the "biggest mistake was selling kWh like baked beans, when customers wanted a service."1

During a wrap-up session for the fact-finding mission, one senior executive from an investor-owned utility observed, "Today, we just offer kilowatt hours; that's what all our pricing models are based on. We've got to move to a place where we're something else. And the something else is a reliability industry. It's something that offers real value to customers in a way that recognizes they can have differentiated options for the products and services we offer."

Lastly, trip participants cautioned that the innovative solutions emerging in Hawaii may not fully translate to the mainland's larger, more complex grid. For example, one executive noted that the electric system on each of Hawaii's six islands is essentially a microgrid, so some of the solutions tried here might not be directly applicable to the mainland.

Despite the market differences, many agreed the mainland could see similar shifts in utility, solar industry, and regulatory mindsets moving forward. And in some cases, the environment they found in Hawaii could arrive on the mainland much sooner than many in the industry expect.

1. Information on the 2014 fact-finding mission to Germany can be found in the November 2014 issue of Public Utilities Fortnightly. See Germany's Energiewende.

Operational and Technical• Expect that the grid can take more. Technical issues are challenging but not impossible to solve with the right economics and regulatory environment. Customer and Stakeholder Relations• Recognize that market drivers can easily outpace regulatory and utility-planning cycles.• Do not underestimate customers' off-grid options.• Establish trust between stakeholders through two-way communication.• Be the enabler of solutions by saying "yes, with..." Leadership• Anticipate change and get ahead of it before it overwhelms you.• Ensure that leaders and all parts of the organization speak with one voice. Internal alignment is crucial.• Establish checkpoints and milestones. Don't strive for perfection: iterate and improve.