We Made Light Free

As inexpensive as lighting was, twenty years ago, we’ve since made it close to free. Too cheap to meter?

If you grew up in the fifties, you too recall when electricity was precious. When your parents and grandparents rationed it like a vital fluid in short supply. 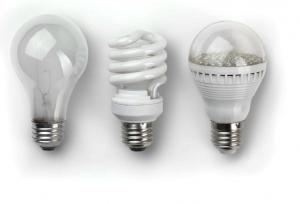 They remembered the hardship and real fear of the depression, and then rationing after Pearl Harbor. Electricity brightened the night, lightened the load, kept food fresh, sent the world's sounds. But it was to be used sparingly. "Steven, shut off your study lamp."

Chances are you're younger, that you grew up in a later decade. Perhaps your parents and grandparents chided you, to shut off your lights, your television, your sound system, the room air conditioner, video game, computer, etc., when you went out. Though probably not as fearfully as my elders.

In the post-war period, the wealth of most families rose rapidly. Necessities became generally affordable. Luxuries became necessities. New luxuries emerged. With increased spending power, we could buy more goods and services and did.

At the same time, electric rates fell rapidly, into the seventies. So every use of a machine, appliance and device shrunk in its significance to the household budget.

It became cheaper, before our eyes, for Mom to run the vacuum cleaner. For Dad to run the electric saw. For all of us to gather in the living room on Sunday night to watch Bonanza.

When electric rates were a quarter per kilowatt-hour, in today's money, every hour your study lamp was on, costs your parents two and half cents. When two and a half cents were dearer.

By the year 2000, electric rates had come down to half that. More in California and the northeast, sure, but less elsewhere.

Every hour your study lamp was on, costs your parents (or you) a bit over a penny. For most families, a penny wasn't that much. So people turned lights on and off with nary a thought or concern about the expense. And added lighting throughout and around their homes.

We're now transitioning to far more efficient light "bulbs." From incandescents to compact fluorescents to light-emitting diodes. Same illumination, but for little more than a tenth as much electricity.

Now, every hour your study lamp is on costs you a bit over a tenth of a penny. In this day and age when few bother to carry pennies. The cute mostly-zinc coin is virtually worthless.

At that rate of expense, who among us would give a second thought before using a lamp for an hour? Or leaving it on, when away from our desk.

To put that infinitesimal expenditure into perspective, the average American household spends over fifty-three thousand dollars annually on goods and services. Leaving a desk lamp on for a whole year would take a hundred and seventy millionths of the average household budget.

Our expenditures on lighting are almost trivial considering the enormous value we enjoy from it. As real electric rates have fallen and lighting efficiency has skyrocketed, the benefit greatly exceeds its cost.

Automatic lighting drives down still further the expense of every ceiling, floor, table, wall and exterior lamp. It cuts into the total time a light is on for a use. It eliminates the waste of lights lit for hours in rooms you've left.

So we add lighting to our living spaces if its adds safety, convenience, productivity, beauty. We've accumulated lights, more than you would guess.

The Energy Department estimated three years ago that there were sixty-seven lights in the average American home. Seems like a lot. But you have to include everything. The six-bulb chandelier. That's six lights. The lights in the garage, those at the front steps, in closets and the cellar. Those are totaled too.

A house's bedrooms have sixteen lights on average. And the bathrooms have another ten. The exterior has another nine.

Of course, the numbers really vary by type of home. An efficiency apartment has few rooms and few lights. A single-family suburban home can have many bedrooms and bathrooms and many lights.

It's an enormous variation by type of home. A single-family home averages more than three times as many lights as a multi-family home.

Fourteen percent of residential electricity consumption in 2014 went to lighting, according to the Energy Department. Expect that percentage to fall when the transformation to efficient and automatic lighting is completed. Will lighting drop to a tenth of residential consumption? And then below a tenth?

Time-of-use rates may become common. Obviously, lighting at home is predominantly at night. That's when rates would be below-average, under time-of-use. So time-of-use would further drive down lighting's expense.

All of your usage of all of your lights might cost you a quarter per day, or a few dollars per month, in variable charges on your electric bill. It's not nothing, but rather close to nothing.

We made light free, just about. You might say light will soon be too cheap to meter.

What does free lighting portend? Futurists predict we'll surround ourselves with many hundreds of lights before long, in the typical home. Some foresee our walls, ceilings and floors becoming dynamic light shows sensitive to our movement and mood.

More innovation and efficiency is on the way. Light-emitting diodes, shaped into Thomas Edison's bulb design, may give way to laser diodes with fiber optic cable and other light-transmitting plastic, to direct and distribute the glow.

"Then there is electricity - the demon, the angel, the mighty physical power, the all-pervading intelligence!

Is it a fact - or have I dreamt it - that, by means of electricity, the world of matter has become a great nerve, vibrating thousands of miles in a breathless point of time?

Rather, the round globe is a vast head, a brain, instinct with intelligence! Or, shall we say, it is itself a thought, nothing but thought, and no longer the substance which we deemed it?"

-Nathaniel Hawthorne, The House of the Seven Gables, 1851