On July 9, 1802, Thomas Davenport was born in Vermont. He built the first direct current motor in the U.S. at age thirty-two. 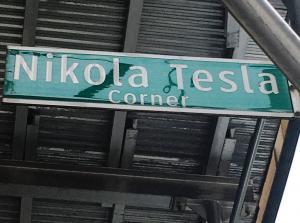 A blacksmith, Davenport had visited an iron works in New York in 1833 and was intrigued by the electromagnets there. He bought one, took it apart, forged a better iron core, and rewired with silk from his wife's wedding gown. Emily Davenport actually played a large role in the project and was named in the 1837 patent.

Three years later, Davenport used his motor to print The Electro-Magnetic and Mechanics Intelligencer. It was the first newspaper printed with electricity.

The motor made no money for Davenport. Running motors with batteries was too expensive. Sales didn't take off until the electric grid developed decades later to power motors.

Davenport was also known for calling out Charles Page who won federal government dollars to build an electromagnetic locomotive. The boondoggle was made clear to all when the test run failed spectacularly.

Page is deservedly credited though for exposing the greatest fraud of the mid 1880s. He investigated the Fox sisters who were enriching themselves performing public séances. Page publicized that the raps were not from the spirits but from the sisters themselves.

The many fascinating episodes in Tesla's career and life would take years of Public Utility Fortnightlies to summarize. For instance, at age fifty-six, he temporarily convinced the superintendent of New York City schools to saturate classrooms with high frequency electric waves "to make dull students bright." And at age seventy-two, he received his last patent, for a vertical takeoff and landing airplane, decades before this technology became a reality.

On July 13, 1977, the infamous New York power outage took place. The Big Apple was brought to its knees after a lightning storm. For twenty-five hours, nine million people were in the dark as mass looting and rioting broke out across the boroughs.

Films and books have recaptured the devastation and desperation. Among them, The Bronx is Burning is about how the internecine battles of the New York Yankees eventually led to a championship and a city's redemption. And then there was Men in Black, the late-nineties comedy, in which we learn that an alien caused the blackout as a bad joke.

On July 24, 1965, the controversial performance by Bob Dylan at the Newport Folk Festival took place, with electric amps. The organizer of the all-acoustic festival had criticized the Paul Butterfield Blues Band. Dylan's reaction: "Well, {expletive} them if they think they can keep electricity out of here, I'll do it." On a whim he said he wanted to play electric.

Introduced by legend Peter Yarrow, Dylan's band performed Maggie's Farm and Like a Rolling Stone to an audience of boos. It was said that Dylan "electrified one half of his audience, and electrocuted the other." Dylan didn't return to the Newport festival for thirty-seven years.