It leaked, she contended, out of empty sockets if the wall switch had been left on. 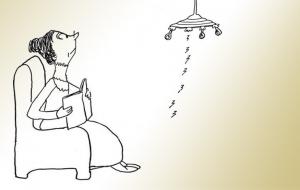 “She had an idea that the Victrola might blow up. It alarmed her, rather than reassured her, to explain that the [hand-cranked] phonograph was run neither by gasoline nor by electricity. She could only suppose that it was propelled by some newfangled and untested apparatus which was likely to let go at any minute, making us all the victims and martyrs of the wild-eyed Edison’s dangerous experiments.

The telephone she was comparatively at peace with, except, of course, during storms, when for some reason or other she always took the receiver off the hook and let it hang.

She came naturally by her confused and groundless fears, for her own mother lived the latter years of her life in the horrible suspicion that electricity was dripping invisibly all over the house. It leaked, she contended, out of empty sockets if the wall switch had been left on.

She would go around screwing in bulbs, and if they lighted up she would hastily and fearfully turn off the wall switch and go back to her [popular magazines] Pearson’s or Everybody’s, happy in the satisfaction that she had stopped not only a costly but a dangerous leakage. Nothing could ever clear this up for her.”

Thurber was recruited to the magazine The New Yorker by writer E.B. White and they worked side-by-side. White co-wrote “The Elements of Style,” aka Strunk & White, and wrote “Charlotte’s Web.”

“The whole world knows what a funny man he was,” White wrote after Thurber’s death, “but you had to sit next to him day after day to understand the extravagance of his clowning, the wildness and subtlety of his thinking, and the intensity of his interest in others and his sympathy for their dilemmas – dilemmas he instantly enlarged . . . just as he enlarged and made immortal the strange goings on in the Ohio home of his boyhood.”