To 2016's Authors, Interviewees Who Impacted the Debate

A hundred and ninety of us voiced our opinions on utility regulation and policy in 2016 in Public Utilities Fortnightly. From Paul Afonso to Audrey Zibelman; chief execs, commissioners and commoners debated competition, cyber, climate change and all the challenges. 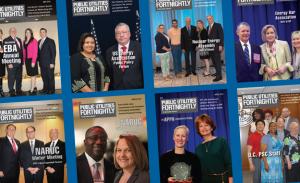 Plus, many of the most respected thought leaders of our time, in utility regulation and policy. We heard from Ralph Cavanagh, Ken Costello, Ahmad Faruqui, Tom Flaherty, William Hogan, Leonard Hyman, Michael Shellenberger, Lisa Wood and Roger Woodworth, among others.

And, many of the most respected regulatory lawyers of our time. We heard from Brendan Collins, Joel deJesus, Carmen Gentile, Delia Patterson, David Raskin, Harvey Reiter and Clint Vince, among others.

There are just too many to mention here. How about an author in July's PUF, Maria Korsnick? She recently became chief exec of the Nuclear Energy Institute. Or an author in March, May, August and September, Tom Sloan? He was reelected to the Kansas House of Representatives. How did Tom have time to campaign?

If I've not mentioned you, my sincere apologies. We're grateful, on behalf of all PUF readers, for your contribution. There are 140 of you that I've not named here. But every author of an article, column or letter and every interviewee is listed in the PUF 2016 Index that follows.

Did you watch Robert Borlick, Ashley Brown, Charles Cicchetti, Michael Rosenzweig and John Sheik debate - with gloves off - on the letters page? And Jim Fama reflect on his remarkable career in that candid interview last June?

This year, 2017, we're off to a fast start. The January 1st, 2017 PUF featured 27 authors. We hope to feature nearly 250 voices this year. By doubling of the magazine's frequency this spring, it will be feasible to fit all of them in.

Which brings us to why PUF was founded back in 1928, and what PUF is all about today. It was and is the forum for commentary, opinion and debate on utility regulation and policy. If you express your perspective in PUF, you impact the debate.

Hence our new slogan, highlighting our mission: In PUF, Impact the Debate.

This year, we hope to expand the readership of PUF to 100,000, by transitioning from single-user licenses to site licenses. That's great. But even when our readership was 10,000, it included the senior decision-makers and policy-makers for the electric and natural gas industries.

So, help shape our industries' paths. Make your point in PUF. We and they are all reading and listening.

Keith Dennis, "Community Storage: Coming to a Home Near You," February's PUF

Alan Feibelman and Gerry Yurkevicz, "Transitioning to the Utility of the Future," September's PUF

Eric Gimon and Robbie Orvis, "How Much Do Combined Cycle Natural Gas Plants Really Need to be Paid," March's PUF

Philip O'Connor, Wayne Olson and Robert Bussa, "A Five-Point Plan for the Next Wave of Electricity Restructuring," May's PUF

David Raskin, "A Rose by Any Other Name: Response to 'Solar Battle Lines,'" March's PUF

Alex Zakupowsky, "Other Side of the Story on Tax Implications of NEM Successor Policies," June's PUF