Edison to Ford: 'Young man, that's the thing; you have it. Keep at it.' From the Archives of the Association of Edison Illuminating Companies

It came at the end of the main banquet at the 1896 annual meeting of the Association of Edison Illuminating Companies, AEIC. The setting was the stately Oriental Hotel in Manhattan Beach, in Brooklyn, New York. A group of the nation's technical and business leaders remained at their table to smoke cigars and talk of the events of the day. 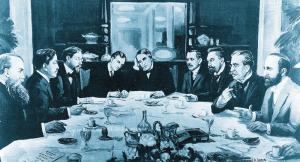 AEIC was founded in 1885 at the dawn of the Age of Electricity. At the 1896 meeting, forty-four power men from eighteen illuminating companies were in attendance.

Thomas Alva Edison sat at the head of the table. He was flanked by officers of the nation's largest power companies.

There was Samuel Insull, from Chicago's Commonwealth Edison. Insull would become the father of utility regulation.

There was John Lieb, from New York Edison. Lieb had been the first manager of Pearl Street, the world's first central generation station. And he was then instrumental in the development of the electricity industry in Italy. 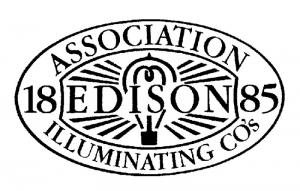 From the Archives of the Association of Edison Illuminating Companies

There was John Beggs and Alex Dow, from Detroit Edison. Beggs, an accountant and director of numerous companies, developed many of our methods in depreciation accounting.

Years earlier, Beggs had wanted to electrify his church to save the costs of candles and cleaning them. He was head of the church's building committee. It became the first worldwide to be wired and electrically-lighted.

The power men talked of electric vehicles. It had been the topic of the afternoon session of papers.

At one point, Dow pointed to his chief engineer, Henry Ford. Ford was thirty-three at the time.

Dow announced, in Edison's direction, "There's a young fellow who has made a gas car." Everyone wanted to hear more. Ford had just completed his Quadricycle.

Taking the chair next to the nearly deaf Edison, Ford described his prototype gasoline-powered carriage. When he finished, Edison "brought his fist down on the table with a bang and said, 'Young man, that's the thing; you have it. Keep at it.'"

Ford recalled later that Edison's "bang on the table was worth worlds to me. No man up to then had given me any encouragement."

Ford left the electricity industry three years later, devoting all his efforts to developing automobiles. His Model T debuted in 1908, and sales were booming by 1914.

At that momentous meeting in 1896, Edison was forty-nine, sixteen years older than Ford. Yet the two great inventors forged a lasting friendship of thirty-five years, lasting until the Wizard of Menlo Park died in 1931.

Edison and Ford famously went on annual camping trips from 1916 through 1924, along with Harvey Firestone, who largely founded the tire industry, and John Burroughs, the great naturalist. During part of the 1921 trip, the men were joined by the President of the United States, Warren Harding.