PUF attended the fortieth national conference of the American Association of Blacks in Energy. AABE met in Washington D.C. on March 21 to 24, 2017.

Forty years ago, Clarke Watson convened a group of African-American energy leaders at the Watergate Hotel in Washington, on July 25 to 26, 1977. He was furious that President Jimmy Carter hadn’t invited any minorities to a meeting of energy policymakers. AABE was incorporated later that year.

Here’s a peek at the conference and an interview we did with Paula Glover, AABE’s executive director, and then with Laron Evans, an up and coming engineer and conference attendee. 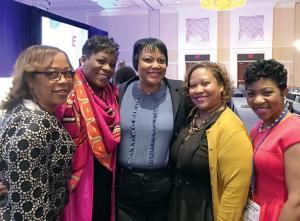