Honoring Him with Our First PUF’s Owen Young Award

I first met David Owens in the mid-eighties. At the time, I was surprised the Edison Electric Institute had an intellect like David on staff. Expected an industry association to be a lobbying group, mainly, with member services mixed in. I had a lot to learn. 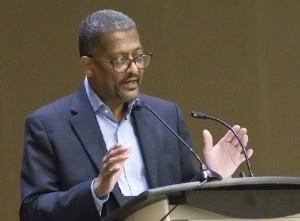 During my four decades in the industry, EEI has been a vigorous debater in the many scrums about utility regulation and policy. It has sponsored thorough research and offered detailed recommendations. Depending upon where you sit, you might have agreed or disagreed with its positions. But you likely found the work rigorous and well-considered. And you likely observed that David was the driver for the work and its eloquent spokesman.

Indeed, David has been the industry’s debater-in-chief. This month, uncharacteristically, he’s decided to put down the mic for good.

You also likely observed that David exuded passion for helping people and the public, through his intellectual prowess. All while he practiced compassion, religiously, with both proponents and opponents of his positions.

There are hundreds, nay, thousands, who would tell you a story about how David took the time (when he seemed to have little), touched them with his caring, and made a difference in their careers, in their lives. Did he touch your career and life too?

The Public Utilities Fortnightly team considered how we could honor David. We do so by selecting him as the first recipient of PUF’s Owen Young Award, for devoting his powerful intellect to the public interest.

Owen Young was general counsel of General Electric, GE, when he founded our company Public Utilities Reports in 1914.

Young was working with the National Civic Federation to develop and submit to Congress model legislation on utility regulation. The often-drastic inconsistency from state to state troubled both utility leaders and regulators:

“Of more immediate concern was some means of simplifying, or keeping abreast of, the diverse laws and regulations affecting the burgeoning public utilities. As power systems crossed state lines, which was rapidly becoming the rule rather than the exception, the multiplicity of jurisdictions to which these natural monopolies were subject was not merely an annoyance; it was a source of confusion to investors and management, and so, too often, of public suspicion. [Young found] the situation profitable to no one save the politician in search of an issue…”

“… The next best thing was to provide a guide for utilities and investors in the form of case reports on state laws and relevant decisions of the courts and public service commissions.”

Public Utilities Reports was thus founded. After a few years had passed, the first Public Utilities Fortnightly was published. Young’s college roommate, Clifford Spurr, was made its first editor-in-chief, my first predecessor.

Soon after, Young led both the electricity and telecommunications industries as chairman of GE and of the Radio Corporation of America, RCA.  He later, at the request of the president of the United States, engineered the settlement of Germany’s World War I reparations.

And, as one of the nation’s most famous and respected personalities, Young was expected to become president of the United States in 1932. He declined to run, in favor of his friend Franklin Roosevelt.

David Owens also was a friend of a president of the United States. When you ask David what’s his proudest professional achievement, he’ll cite his leadership role in the response to the devastation of Hurricane Sandy at the request of President Barack Obama and EEI president Tom Kuhn.

We’ll be issuing the criteria shortly, the specs that will guide our picks. That will support our analysis of the greatest thinkers and doers in utility regulation and policy.

But, to make the list, in sum, you need to be a David Owens. A powerful intellect that’s impacting the course of our industry.

Coming up with the list should be a blast. And you have a key role. Send me your nominations, to mitnick@fortnightly.com. Tell me why John Doe or Jane Smith ought to be in PUF’s Top 40 Innovators.

Did they reset how we thought about regulation and policy? Did they make you want to hear them out? Did they change your mind?

Did they reshape our industry’s future?