The Wright Brothers secured their place in history with the Kitty Hawk Flyer. That first flight in 1903 covered just a hundred-twenty feet in twelve seconds. Two years later, Wilbur Wright flew Flyer III in circles, keeping the machine airborne for thirty-nine minutes before running out of fuel. 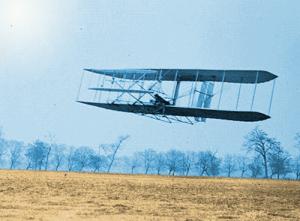 The duration of the Flyer III flight was impressive. More important was the circling. They demonstrated lateral control for the first time. Steering moved flight from mere novelty to a plausible commercial opportunity.

Give the Wrights due credit, but the truth is the path to human flight was worn over centuries. The notion is revealed in Greek mythology and was inspired by Leonardo da Vinci's illustrations. The reality advanced over the 18th and 19th centuries from trials with wings, balloons, gliders, and finally
to the airplane.

Bigger, faster, cheaper, further. Innovation around the fundamentals of flight took hold. From propellers to jets to supersonic speeds and precision controls. Propulsion opened the heavens, and more.

Today, personal jet packs, like those in the Jetsons cartoon, are nearing commercial production. Drones for all kinds of uses, including as taxis for people, are in development. Several companies are working to commercialize flights to space (and back!). And, as scientists peer closer to the edge of the universe, human flight to inhabit other planets has entered public discourse.

The pioneering spirit is innate.

Similar stories of pioneers are found in so many platforms, both practical and creative.

Delve into the history of any medical device, musical instrument, or public health practice. Plot the transition of horse-and-plow farming to precision agriculture or of print shops to digital publishing.

Marvel at the immense influence of connectivity: the Silk Road; the Erie Canal; inter-continental rails and roads; global air travel; and the Internet.

Consider, too, the most empowering invention of all time, electricity. The discovery and commercialization of electricity stands as a stellar example of ingenuity.

Every expression of humanity is advanced by trailblazers.

Ingenuity follows a trajectory, as we see with the past, present, and future of flight. The direction of change is largely defined by pioneers and those who enable them. The pace of change is influenced by other factors, such as customers, investment, business models, public policy, regulation, and the like.

When it comes to utilities, one sensible role is to optimize the performance of in-place systems. Another is to leverage the incumbent advantage of resources, scale, and insight to pioneer new value.

Unfortunately, most utilities appear to be caretakers. They are good stewards of what is, not advocates for what can be. Too few strive to discover and develop an ever-more valuable future. Too many leave the pioneering to others and their future to fate by default rather than by design.

Progress toward greater value is stifled when short-sighted incumbents focus on defense of the status quo at the expense of their future. Odd as it seems, the Wright Brothers showed this sort of reticence to change, even with their new invention.

The self-reliant Wrights fought hard to secure their patents. But they did little else and didn't earn much as a result. After all, at the time of their invention, there was as yet no airline industry with customer demand to be met.

Compounding their market problem, the brothers held tight to the format that first worked for them. Others learned from them and diligently developed even better ways to achieve flight.

The potential of commercial flight was realized, just not by the Wrights. It seems the brothers lacked the business savvy needed to progress and were too slow to adapt.

Conversations the Wrights might have had with their investors in that time are easily imagined: "Trust us, we now know what works. Those competitors don't know what they're doing. Their ideas won't fly. There's no time. Changes at this point aren't worth it. We tried that already. Customers will come to us. Best if we stick to our knitting."

Excuses, excuses. You've probably heard them all. Plus a few more: "Customers don't care. That's not what we do. It isn't our core competency. The regulators won't let us."

How easily we can talk ourselves into mediocrity.

Consider the trajectory of electric energy, which has devolved over time to commodity status.

Like the Wrights' Flyers, electric energy was novel but not particularly relevant in the early days. Unlike the Wrights, Edison and other early pioneers in electricity worked to invent applications for using the invention.

For decades, electricity was valued for what it enabled. Work made easier, productivity greater, and connectivity better than ever. Policies and regulation followed, designed to attract investment and accelerate electrification for all.

Appreciation for the empowering effect of electrification declined as service became ubiquitous. These days, value is judged on reliability and cost of power delivered rather than what electricity enables.

Pioneers are reversing this trend.

New technologies combined in new ways create unexpected value. Novelty in the electric industry is on the rise. Which utilities will show the business savvy and adaptability to reclaim industry relevance?

There's a false comfort in doing what's been done over again. The value chains we know are linear and manageable. The outcomes are predictable. Until they are not....

In contrast, creating what can be involves new thinking, intentional effort, and adapting from trial and error. Non-linear constellations of value are the new source of novelty and relevance.

This is especially true in industries such as electric utilities which are experiencing new technologies, new policies, and new consumer demands.

Little wonder then that the utility industry is a magnet for new entrants.