In PUF, impact the debate. It's a motto, sure. But it's also way more than that. 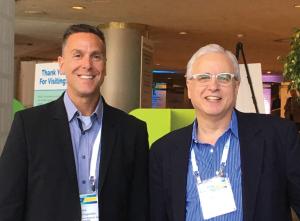 To empower you to impact the debate. It's what we were founded for, way, way back, eighty-nine years ago. It's why we exist, what we are.

The roaring twenties — when PUF started doing this — were a very different time. I know that. But utility regulation and policy was as controversial then as it is today. If not more so.

That might surprise you. Can anything beat our net metering wars? Or wholesale market interventions in defense of base load capacity? Or forays on the venerable utility business model? Many of you have fought in the trench warfare on these questions.

Could there possibly have been past battles in utility regulation and policy as fierce as our Somme, Verdun and Passchendaele? The simple answer is yes. Experts and laymen alike — at a time when Thomas Edison, Samuel Insull and Nikola Tesla were still around — constantly clashed on the most fundamental issues.

The basic concept of state ratemaking commissions was questioned. David Lilienthal's faction of commissioners would have abolished NARUC.

In this highly-contentious environment, Public Utilities Reports, our company, stepped forward. For fourteen years, since before the Great War, PUR had been the neutral curator of rate case reporting, with in-depth analysis of commission orders. (To this day, we continue this tradition for regulatory professionals nationally.) Our company established a forum for commentary, opinion and debate in 1928 on how the industry and regulation could and should better serve the public interest.

That forum was a magazine, Public Utilities Fortnightly. Eventually everyone called it PUF. It would publish competing views contributed by all sides. Let the best argument win.

The ground rules were set at the beginning. The contributed articles and essays, when criticizing a policy or party, had to be civil in tone, respectful of opponents. The writings had to be logically supported by facts and experience. And each piece had to be written in an easy engaging style accessible to all, most particularly utility and regulatory leaderships.

Fast forward to today. The same ground rules rule. We do live in a less civil time, and in a time when charges fly faster than facts. Nonetheless, in PUF, on our battlefield, the armies clash, still, with mutual respect and honorable weapons. No gas masks needed.

And if in 1928 it was critical to write in an easy engaging style, it is that much more necessary in 2017. Authors, I'm speaking to you. To really impact the debate on regulation and policy in the present day, your style had better be easy and engaging.

That means short. How many three thousand word treatises are you reading? Well, the same goes for the readers you're trying to win to your side.

That means emotive. How many dry third-person pieces — on the one-hand this, on the other hand that — are you still reading? Well, how do you think that exec or commissioner feels?

That means visual. How many long strings of colorless text, devoid of pics and video, are you still reading? Want to really make an impression on decision makers and policy makers? Then it's past time to deploy pics and video that connect with readers.

That's wha the New York Times thinks. The gray lady took a hard look at itself earlier this year. Its "Report of the 2020 Group" concluded:

"The Times has an unparalleled reputation for excellence in visual journalism. We have defined multimedia storytelling for the news industry and established ourselves as the clear leader. Yet despite our excellence, not enough of our report uses digital storytelling tools that allow for richer and more engaging journalism. Too much of our daily report remains dominated by long strings of text...

We also need to become more comfortable with our photographers, videographers and graphics editors playing the primary role covering some stories, rather than a secondary role."

Our new PUF AV — Public Utilities Fortnightly Audio Video — gives you the power to do this. Write your article or essay, as always. But then grab a game colleague with an iPhone and shoot a brief video or two or three to highlight the key takeaways.

You might have penned a piece on the need to protect nuclear plants in wholesale markets from the peculiar pricing of energy and capacity. Great. Your next step is to identify the takeaways you really want to hammer home, and hammer away in a few brief videos. In PUF AV, we'll highlight your vids so thousands in our industry take a peek.

How we're all reading is rapidly changing in the digital age. So too is the most effective ways to communicate, to persuade, to ... well, impact the debate.