‘AEP can bring technological solutions for smart cities to other areas of the country.’

Tom Flaherty is a partner with Strategy&, part of the PwC network, with over forty years of consulting experience. Most recently, he has led assignments related to standing up innovation programs and capabilities within utilities. Steve Mitnick is Editor-in-Chief of Public Utilities Fortnightly and author of the book “Lines Down: How We Pay, Use, Value Grid Electricity Amid the Storm.”

Fortnightly Magazine - August 2017
This full article is only accessible by current license holders. Please login to view the full content.
Don't have a license yet? Click here to sign up for Public Utilities Fortnightly, and gain access to the entire Fortnightly article database online.

At the recent EEI Annual Convention, PUF's Steve Mitnick and Tom Flaherty of Strategy& sat down with five utility CEOs to discuss how they are encouraging innovation at their companies. Below is an edited transcript of the interview with Nick Akins. 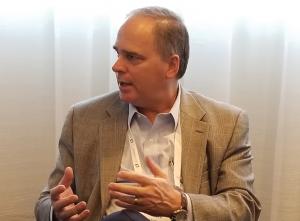 Nick Akins is chairman, president and chief executive officer of American Electric Power. Akins rose through the ranks at both AEP and the former Central and South West Corp. (CSW), which merged with AEP in 2000. Prior to being elected president of AEP in December 2010, he served as executive vice president - Generation from 2006 through 2010. Akins began his career in 1982 as an electrical engineer.

Tom Flaherty of Strategy&: Why have you put more focus on innovation over the last couple of years?

American Electric Power's CEO Nick Akins: The culture of innovation has always been in the DNA of AEP. We plan on continuing to foster that. But, we must redirect it. A lot of innovation in the past was focused on central station generation. Our current focus is on transmission-related wires-related innovation and activities.

But, as this industry changes, there's no question that we need to look at innovation on the customer side. We focus on how to develop the new products and services that our customers want and need. Historically, AEP and the whole industry have not had that perspective.