Powerless in a Sierra Leone Prison

Not surprisingly, the juvenile prison is a low priority for the National Power Authority.

‘Intermittent’ would be overly generous to describe electricity access at the Central Prison in Freetown, the capital of Sierra Leone. Built for two hundred and twenty adult prisoners, it typically has more than one thousand juveniles, some as young as fourteen. Photographer Fernando Moleres asked how they experience energy poverty. 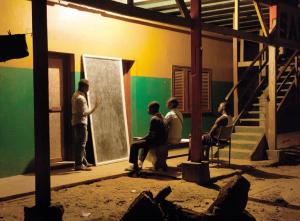 At most, we have electricity three or four times per week, for a few hours and usually only in the evening,” says Amidu Rashid Gbla, a 16-year-old boy serving a one-year sentence at the prison. “There are no diesel generators, so when the government electricity supply fails, the entire compound falls dark.”

With a population of almost six million, Sierra Leone has an electrification rate of just five percent. But even within that figure, huge disparities exist between energy access in urban centers (eleven percent) and rural areas (less than one percent).

For the one million people living in the capital of Freetown, electricity is more often off than on. Not surprisingly, the juvenile prison is a low priority for the National Power Authority. Beyond long, dark nights, lack of electricity is linked to other problems at the prison, including lack of running water and basic sanitary facilities.

“Conditions are appalling,” says photographer Fernando Moleres. “On top of everything else, there are no beds or even mattresses and hardly any food; on good days, the boys get one meal.” 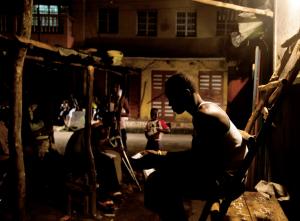 Even when electricity is on, light bulbs are sparse and lighting weak inside the cells.

Dark nights are the worst, says Santigie M. Sankoh (age 17; three-year sentence). “Guards become very harsh, often sending us back to our cells early to avoid losing control and attempts to escape. We feel very bored on such nights: they become very long as there is nothing we can do but sleep.”

More problematic is that guards will not enter the dark cells, even if inmates indicate a fellow prisoner is ill or some other emergency arises.

Most of the boys are in for minor crimes, but have little hope of getting out once incarcerated. Without trials, the teenagers are regularly given sentences of two to three years for crimes such as stealing $25 or two sheep. Others say they have been in prison for six years without ever being told why. In 2010, one boy died in the over-crowded cells before his sentence was fully served. Many boys fear they will meet the same fate.

Asked what they could do differently if the electricity supply were more reliable, the boys respond like typical teenagers: study, play video and board games, and watch football matches. 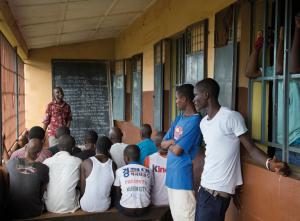 The boys have more chance of learning during the day, when teachers can come to the prison and guards are more at ease.

“These young men have more chances of dying — from diseases, malnutrition, etc. — in the prison than anywhere else in Sierra Leone,” says Moleres. “Some have come from rural areas; their relatives don’t even know they are in prison. Also, injustice is more flagrant: there are barely any lawyers, some detainees have spent years in prison without even going in front of a court.”

Haunted by the degree of neglect and disregard he witnessed on his first visit to the prison in 2007, Moleres was determined to press past the limits of photojournalism. On subsequent trips, he used his previous training as a nurse to smuggle in medicines and treat what conditions he could. He set up an association to raise money to assist juveniles in the prison who need legal assistance and help with rehabilitation once they are released, including returning to school or retraining so they can enter the workforce.

In May 2016, Sierra Leone signed an agreement with the UK Energy Access campaign with the aim of achieving universal access by 2025, largely through off-grid solar solutions. A key aspect is eliminating taxes on renewable technologies to stimulate a domestic renewables industry. 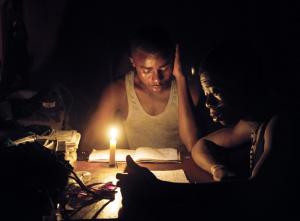 Most nights, studying is done by candlelight inside horrendously overcrowded cells, creating substantial risk for everyone.

To view more of the photos for which Moleres won multiple awards, please visit: http://bokeh.jjie.org/african-children-in-prison-byfernando-moleres/

For more information on EnAct or how to support it, visit the websites http://www.en-act.org and http://www.coldathome.today, or contact the Executive Director at marilyn.smith@en-act.org

Lead image: On evenings when the electricity is on, catching up on studies is a top priority for the juveniles at the Pedemba Road Prison in Freetown, Sierra Leone. F. Moreles / Sierra Leone