Roger Bezdek is the president of MISI, in Washington, D.C. He has served as a senior advisor in the office of the Secretary of the Treasury and as research director at the Department of Energy. He is the author of six books and over three hundred publications in scientific and technical journals, including over a dozen articles in Public Utilities Fortnightly.

The U.S. Department of Energy provided funding for the analysis of these data. However, the paper does not necessarily reflect Administration policy.

In Part One, we assessed the recent past and current state of the U.S. coal industry, with emphasis on Appalachia. In Part Two, we examine alternative scenario futures for the industry, involving assumptions about economic growth, energy requirements, technologies, tax incentives, and research and development. 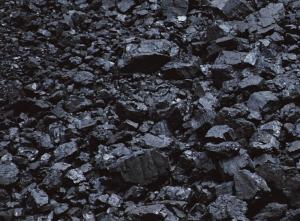 Our firm, MISI, used a version of the U.S. Energy Information Administration's forecasting model, the National Energy Modeling System, to examine the potential impact on coal and coal-related jobs of various assumptions and scenarios. That version is labeled "NETL CTUS-NEMS."

This is an integrated model of the U.S. energy system linked to a macroeconomic model. The impacts on the coal industry and coal-related jobs through 2050 of the following scenarios were assessed. 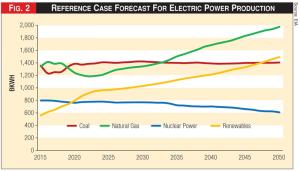 These scenarios are summarized in Figure 1. 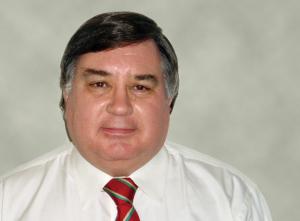 Section 111(b) of the Clean Air Act, the Carbon Pollution Standard for New Power Plants, remains in place in all of the scenarios. With the CCS tax credits, new coal plants with CCS will be built, but not coal plants without CCS.

Without the DOE program goals, the rate of CCS technology learning is reduced from the AEO 2017 Reference Case because there is no federal CCS R&D. The O&M costs for EOR are assumed to be lower than in the Reference Case in all of the alternative scenarios. MISI estimated the economic impacts and jobs created annually 2020 - 2050 by coal mining, new coal plant construction, coal plant O&M, EOR, saline sequestration, and pipelines. 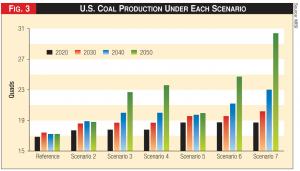 The employment concept used is a full-time equivalent job in the U.S., which is defined as two thousand eighty hours worked annually, and adjusts for part time, seasonal employment and labor turnover.

The scenarios indicated the effects of different policies and assumptions on the coal industry and related sectors of the economy. For example: all the alternative scenarios indicated the impacts of a higher economic growth rate, compared to that used in the Reference Case. Scenario Two simulated the combined impact of higher economic growth and higher electricity demand growth. 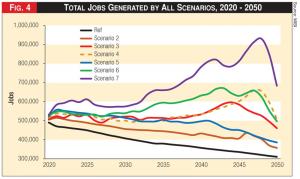 MISI simulated the impacts on the U.S. coal industry through 2050. The Reference Case projects no increase in coal use through 2050, as shown in Figure 2. In this case, due to increasing labor productivity and declining coal demand, coal-related jobs decrease continuously. However, the U.S. may require more coal than is currently anticipated for a variety of reasons. For example, EIA forecasts that through 2050 natural gas costs to utilities will increase much more rapidly than coal costs. 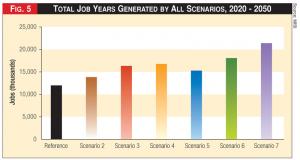 Figure 3 indicates that the scenarios have dramatic effects on U.S. coal production and that the impacts increase as the forecast period lengthens.

Figure 4 shows the total number of jobs created annually (directly and indirectly) by each of the seven scenarios. 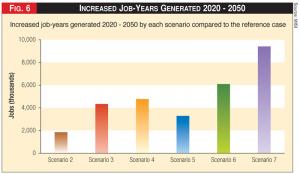 Figure 5 shows the total job-years generated by the scenarios through 2050, and illustrates that all of the alternative scenarios generate substantially more job-years than the Reference Case. 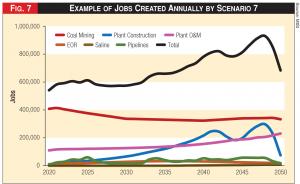 The results indicate that under all the scenarios except Scenario Seven, the total number of jobs generated by the coal mining industry decreases continually through 2050. That is primarily due to continued increases in productivity in the industry.

Saline sequestration comprises the smallest portion of jobs created in any of the scenarios, and in several of them there is no saline sequestration. The sharp decline in jobs in the later years in Figures Three and Six is an artifact of the model's timeline for building new coal power plants and the associated construction jobs.

Several patterns of job generation are clear: under the Reference Case and Scenarios Two and Five, job creation generally declines over the entire forecast period. Under Scenarios Three, Four, and Six, annual jobs created tend to increase until the early to mid-2040s and then decrease significantly by 2050.

Scenario Seven is the only scenario than creates more jobs in 2050 than in 2020. All of the scenarios generate many more job-years than the Reference Case.

The results of the scenarios have implications for economic, energy, and job-creation policies. For example, higher economic growth will increase the demand for coal and coal-related jobs.

Over the forecast period, under Scenario Two, which assumes a higher GDP growth rate than the Reference Case, nine hundred thousand more jobs are generated by the coal mining industry and 1.8 million jobs in total are generated - an average of sixty thousand jobs per year.

Thus, the marginal impacts of achieving the DOE R&D program goals in conjunction with CCS tax credits are substantial. Compared to the Reference Case, between about five and ten million additional jobs are created, depending on the growth rate and the level of oil and natural gas prices.

A higher economic growth rate will substantially increase the demand for coal and coal power plants, and will significantly increase the number of coal-related jobs generated.

The Administration's goal of three percent GDP growth will further increase the number of jobs by as much as fifteen percent. That means more than 3.2 million additional jobs would be created, for a total of nearly 25 million coal-related jobs.

All of the scenarios would significantly increase the number of coal-related jobs generated every year above those created under the Reference Case. The largest job increases occur within the high oil and natural gas prices environment utilizing both CCS tax credits and DOE R&D.

Even in an environment of moderate oil and natural gas prices, utilizing both CCS tax credits and DOE R&D greatly increases the number of jobs created. Tax credits are not sufficient to maximize job creation; DOE R&D is required.

The full maximization of job creation is achieved using both CCS tax credits and DOE R&D within a high oil and natural gas prices environment. This results in the creation of an additional 9.4 million jobs, or three hundred fifteen thousand jobs annually.

MISI also found that under Scenario Seven, in 2030, West Virginia would gain enough jobs to comprise about four to nine percent of state employment. This would mean the difference between recessionary conditions in the state and full-employment prosperity.

The salient finding is that to maximize economic benefits and job creation, both CCS tax credits and the DOE R&D program need to be implemented. This will help stimulate economic growth which will, in turn, create even more economic growth and jobs.