I showed up too early. I must have. Cleared security at 888 First Street Northeast — FERC — an hour before the historic open meeting was to start. And took the best seat in the house, the house being empty when I arrived. 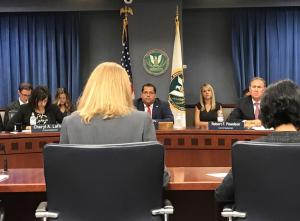 Maybe people forgot about FERC. Or forgot it meets monthly, when there's enough commissioners. Which we used to think would always be the case.

Incidentally, FERC open meetings take place in room 2C. As in, to see. A coincidence?

Eventually, as the time neared ten o'clock, people arrived. FERC staff in the prime spots upfront among the commissioner chairs. Journalists arrayed along the reporter table to the left, laptops opened and readied. Utility reps, curious onlookers like me, and the protesters (more on them later) back in the grandstands.

It began to resemble an old-fashioned monthly open meeting. Like in the good old days when the monthly meetings took place monthly, when a quorum of commissioners was taken for granted.

The room became electric, so to speak, when the newly confirmed duo of Chairman Neil Chatterjee and Commissioner Rob Powelson entered. Two plus one (Commissioner LaFleur, lonely no more) equals three. Since three is more than half of five — the full complement of commissioner chairs - the quorum returns.

The sigh of relief from all was audible when the U.S. Senate uncharacteristically acted a few weeks ago. Indeed, having found that confirming FERC commissioners is easier than perfecting the nation's health care systems, the Senate is now threatening to confirm two more. Gadzooks.

Well, nearly all sighed relief. The prime exception being the protesters.

At FERC open meetings, the protesters are - sadly - a constant. At an open meeting last year, the protesters, ignoring that the commissioners were singularly focused on supporting the Obama Administration's Clean Power Plan, waited until finally an offensive word was uttered. Gas. Gasp! Then, in unison, they stood, repeatedly shouted, and were ushered out by security singing the poignant civil rights song "We Shall Overcome."

Those proceedings then continued. A number of requests of FERC — generally non-controversial — were decided. And with that, the enormous backlog of cases non-controversial and otherwise, accumulated during the no-quorum middle ages, was marginally reduced.

And with that, Chair Chatterjee pronounced the meeting adjourned. It felt good. The Fed's reconstituted Energy Regulatory Commission, with one open meeting under its belt, was ready to roll.