David Rosenberg is CEO of AeroFarms. 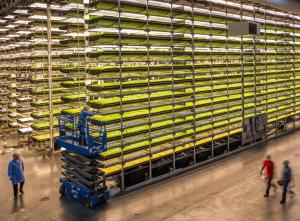 PUF's Steve Mitnick: Why is indoor vertical farming a big game changer for society and the electric industry?

David Rosenberg: It helps illustrate some of the innovation that needs to come together to solve big problems. How are we going to feed our planet with its growing population? By the U.N.'s estimate, we need fifty percent more food by 2050. 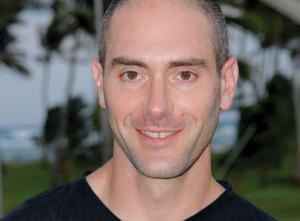 The biggest part of the cost is the lights. The LEDs are becoming more efficient. The capital cost and the energy costs are being reduced.

PUF's Steve Mitnick: Can indoor vertical farming have a big impact as far as its costs, and its acceptance by consumers?

PUF's Steve Mitnick: I am astonished at the scale and technical sophistication of AeroFarms. How do you see your company pioneering this revolution? 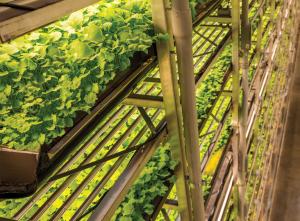 David Rosenberg: We have been doing this since 2004. It is not easy, and the scale is a big part. That signals how we've evolved past where a lot of the competition is. There's a big difference between growing small systems and growing big systems. There's scaling biological processes. New problems emerge, and we're just further down that path of solving a lot of these complex problems.

David Rosenberg: We're predominately focused on leafy green vegetables. We're growing kale, arugula, watercress, mustard greens, Asian greens, and lettuces. We're growing them in a warehouse, as opposed to a greenhouse or the field. There's zero sun, zero soil. Instead of soil, we have a patented cloth growth media. Instead of sun we have a series of LED lights.

We are figuring out what the plant wants when it grows in its optimal setting outside, and working to mimic those conditions inside. Figuring out, not only what are the right seeds for these conditions, but also what's the right amount of light, intensity, frequency, nutrients, temperature, humidity, and carbon dioxide. All of these are different aspects that stress the plants, and help drive optimal plant production. 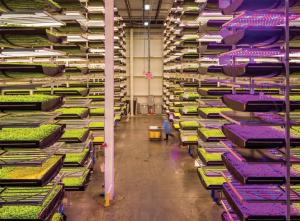 David Rosenberg: I used to think that we were a supply chain play and that's our competitive advantage. As it turns out, we can also compete on taste and textures. We've gotten good at understanding how to grow these plants, giving them what they want, and therefore, positively impacting their taste, texture, and nutritional value. It's a better experience for the customer.

PUF's Steve Mitnick: Your power bill and managing the power, isn't that a big part of your cost structure and operation?

David Rosenberg: It is. The biggest part of our cost structure is energy. We've got to be smart about energy. Being smart means two things; one is design. Whether designing the right light, right luminaire, right climate controls, or the right pump. Next is operations.

PUF's Steve Mitnick: You use very large amounts of energy, which means where you locate, which utility, and, also whether you're near a substation that can handle you or not. That's really important.

PUF's Steve Mitnick: You're producing for supermarkets in pretty big numbers. What's holding you back from going even faster and growing more?

David Rosenberg: Two things. While we're the leader, there's still more to prove out. We just built our 9th indoor vertical farm that is largest in the world. We're still integrating elements of automation. That reduces the labor components of our cost structure.

Now coming out of Q4 2017 and Q1 of 2018, we will have more pieces of the puzzle to inform future debt financing to build more farms. Financing strategies are also part of the pioneering work at AeroFarms.

It's expensive and we need capital suppliers that are willing to take on more risks than they might with tried and true systems. They need to appreciate the environmental and societal benefits and have a willingness to do a hard deal, as things get proven out in both the project finances and debt in that group.

Proving it out further and the right capital partners are really two things tied in together. We have a pipeline of projects. It's putting the capital together in different pieces, and it's still coming together in pieces, not as elegantly as if we had X number of years of proving out the business model.

PUF's Steve Mitnick: You were telling me about how sophisticated some of your staff is, using some pretty advanced technologies, automation, and machine learning. Talk about that a little bit.

David Rosenberg: What I'm most proud of is our people. We have a hundred and twenty people, of which about half have a technical background. Here, for example, we have mechanical engineers, structural engineers, lightning engineers, electrical engineers, PLC engineers, and system engineers.

PUF's Steve Mitnick: What can my industry do if they want to promote this?

David Rosenberg: A few things come to mind. One, we are aware of all the complexity around changing an industry, and changing the world. We're going to get there faster, working in partnerships with different industries. The energy is, absolutely, one way.

There's room for collaboration in terms of how we can better draw down energy from the grid, how we can better set up our own energy sources, and whatever that right combination is. There are ways to optimally pro-locate, and explore if there are opportunities in being more energy efficient in some of the features of a farm. Whether that's our environmental controls, or specific lights, pumps, things of that nature.

There's a tremendous amount of research and development. For example, we could lower our energy just by understanding what optimizes photosynthesis. What spectrum, what intensity, what frequencies, could have significant impact. There's a lot of innovation collaboration potential.

Then beyond that, it's easier when we go in to build a facility if the infrastructure of an existing city is up to date. There are too many antiquated infrastructure grid systems in cities. We looked at projects where one of the challenges in cities is upgrading a transformer.

Then, sometimes, it's hard to navigate each of the providers to get answers. What's the capacity of a transformer, or what part of the grid it is, and when it would be upgraded, and what an assessment is and who's going to pay for it. Sometimes, what sounds like a simple question is hard to get simple answers to.

The other piece, are there incentives in place that encourage innovative companies that have a positive environmental footprint? Incentives work. Incentives help get projects moving faster and they help policy makers encourage the kind of projects they want.

PUF's Steve Mitnick: Your senior team includes some people with real energy experience. What professional background did you come from, and why you are doing this? Why did you create and grow AeroFarms?

David Rosenberg: For me it was water. Before AeroFarms, I built a nanotechnology company that was involved in water proofing and corrosion control. I learned how much water gets wasted in agriculture and how much water pollution comes from agriculture.

Inspired by that, I wanted to build a company that had a positive impact on water. From there, I realized I wanted to focus on agriculture. Then, I liked the plan of local food production.

It's some of the most nutritional food we have in the world. For a confluence of reasons, we decided to focus here. We're also trying to make the business plan as good for shareholders, as well as have a positive and social impact.

Here we're helping alleviate a food desert, we have a model that helps educate kids, and we get them to eat more leafy greens. Most importantly, we're inspiring people with our innovation.