Author Bio:
Steve Mitnick is Editor-in-Chief of Public Utilities Fortnightly and author of the book “Lines Down: How We Pay, Use, Value Grid Electricity Amid the Storm.”
Bill Spence is CEO, PPL.
PUF 2.0 - November 15, 2017

PUF's Steve Mitnick: I want to get your take on EPRI's Efficient Electrification initiative. How are you involved in this initiative and with EPRI? 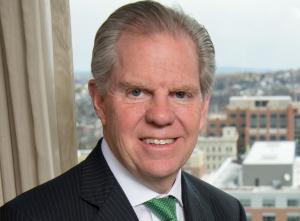 Bill Spence: PPL has been involved in several of EPRI's research projects, including projects focused on electrification, end-use efficiency and evaluating the potential for electrification in PPL's service territories. I have also been serving on the EPRI Board for several years and I'm a member of its task force on efficient electrification.

Overall, we believe the opportunities for efficient electrification are significant and growing. I think what's really driving this are advances in technology. That's enabling many of these opportunities to become cost efficient and very effective.

PUF's Steve Mitnick: Will it be a real game changer?

Bill Spence: It could be a real game changer. The key to how rapidly change comes is how quickly the technology continues to evolve and how well customers adapt to and adopt these new technologies.

I'll give you three examples. PPL is currently focused on three specific areas that we believe hold promise for our customers. The first is commercial food service equipment. These are relatively small items but could be of significant benefit for our customers. These include things like electric fryers, griddles and combination ovens.

The second area is commercial and industrial electric forklifts. The Lehigh Valley region of Pennsylvania, where we have our headquarters, is a significant logistics and transportation hub because of its proximity to major population centers like New York and Philadelphia. Whether it's FedEx, Amazon or others that operate these large warehouses, they can use electric forklifts to great advantage.

The third area is commercial next-generation rooftop heat pumps that could also benefit warehouses, and others such as restaurants and standalone retail businesses.

PUF's Steve Mitnick: Why are those electric technologies and others so good for customers? What are some of their promising advantages?

The benefits can extend to other less obvious areas, as well. These include saving water. For example, applying efficient electrification to agriculture, farmers could see water use drop by sixty to eighty percent.

PUF's Steve Mitnick: As these things progress and get accepted and have an impact, do you see an effect on the role of the utility?

Bill Spence: I do believe the role of the utility will change over time. If these electrification technologies are adopted, that could take many forms. As we focus on advancing a cleaner energy future, utilities can play an important role in advancing these technologies and communicating the benefits to customers.

Bill Spence: Many of the opportunities are happening now and are growing rapidly. I believe the industry will be communicating a lot of the benefits and the technologies in a much more meaningful way than we have in the past.

In other words, we are going to promote these technologies and these business opportunities in a very direct way to customers. For example, you may be aware that EPRI is going to be hosting an electrification conference in California next year. While EPRI is not in the business of promoting any particular fuel or technology, they will be sharing the research aspects of electrification.

Utilities are hoping to bring thousands of customers together to show them what's new and exciting as it relates to efficient electrification.

I think this is probably going to be just the start of our industry's efforts to get the word out on how these technologies are evolving and how they can benefit consumers.

PUF's Steve Mitnick: Where is this ultimately going?

Bill Spence: I think you're going to see a very meaningful component of our electricity sales being driven by this electrification initiative, especially beyond 2025.

I'll say it's an initiative, but it's really a trend. That trend is going to accelerate as adoption rates climb. You're also going to see a lot more investment by industry, as well as private equity, in some of these technologies. I expect to see the cost come down significantly as we get to scale.

I see this trend happening as it has with battery, wind and solar technologies. Those technologies began fairly modestly, but are now mainstream components of the electric grid.

PUF's Steve Mitnick: What about your companies in the United Kingdom?

in terms of future electric sales in both the U.K. and the U.S.