A smart warehouse full of growing plants. Lettuce, kale and other leafy greens. 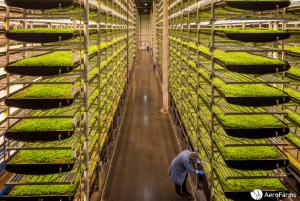 If you saw the movie The Martian you'll get the idea right away. But on a much bigger scale. And not on Mars, but in Newark, New Jersey.

AeroFarms is an agriculture company that uses vertical farming to produce 130 to 390 times the output of a conventional farm. It's all done indoors under LED lights. The lights shine at a specific intensity and spectrum that's tailored to each plant.

The plants are stacked on racks thirty feet high, in containers using cloth instead of soil and a light mist instead of water. Sensors in the trays collect 30,000 data points to track how the plants grow. If the kale isn't sprouting at a certain light spectrum or oxygen level, the farmers can tweak the settings for the next batch.

Every year, AeroFarms will produce up to 30 harvests and yield two million pounds of greens.