In this short video, Scott Gibson of Snohomish County Public Utility District and Eric Walters of Gainesville Regional Utilities speak at the APPA Public Power Forward Summit on December 11-12 in San Francisco about the technology and applications of their cutting edge microgrid projects. 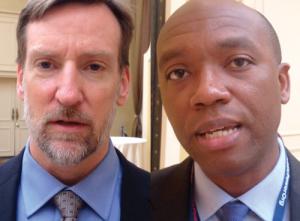 Scott Gibson: The purpose of the microgrid is to be able to power up a building so that in the event of a disaster we can keep this building powered, keep crews going through the time of the disaster, and allow the grid to be put back together.

Eric Walters: [University of Florida – Gainesville] has a microgrid that’s in partnership with our local healthcare provider. It is located on their campus, in between their healthcare facilities, and it serves the entire block of the master planning community. That area is just south of the University of Florida campus, and in between our downtown and I guess, western parts of town.

It allows for us to be able to operate in our core competency, to operate utilities, to do the maintenance to the operation and those things. And also, frees up our customer to be able to focus on what they do best. We’re able to separate from the grid if we need to, and supply them without them even knowing.

We’re going to experiment with using our fleet vehicles to also be another chunk of battery. This battery storage system, lithium ion, the solar ray, the recip. generator, the vehicle-to-grid system, all of that will work in conjunction with a microgrid controller to keep a really critical facility powered up in the event of a disaster.

All of that is self-contained within the building. So, if we have to separate from the grid, we can also operate that equipment.

Scott Gibson:The challenge is for cost. Costs of batteries are still expensive. The costs are coming down. Fortunately, the electric vehicle market is driving improvements in efficiency and cost reductions in batteries. But they are still expensive. So, being able to afford a battery big enough to do what we need to do is one of our biggest challenges.

I think another challenge is just going to be creating the microgrid control system, to make sure that everything works in unison. So that when the grid goes away, we can seamlessly disconnect from the grid and connect up to the microgrid system with no loss of power to the building.

Eric Walters: Key challenge is really integration within the existing grid and also with the customer. They’re on the cutting edge of healthcare technology, and being able to support them consistently, in a way that they need, has presented some growing pains. But I believe that we’ve overcome that.

Also, just some of the things that were in the design that we thought, hey this will be a great idea, when we get into it, it doesn’t work out as far as we thought it was going to work out. Being able to work with those things, to improve them, to either change settings or designing a program to make them more applicable for what we’re doing and make them more reliable, and resilient.