Part One of Two

Jim Pyke is a managing director in Houlihan Lokey’s Strategic Consulting business. He is based in the firm’s Chicago office. Prior to joining Houlihan Lokey, he was an executive with Quanta Renewable Energy Services and was responsible for driving startup growth and building the organization.

Nic White-Petteruti is an Associate in Houlihan Lokey’s Strategic Consulting business. He is a licensed Professional Engineer with nearly a decade of consulting experience in the energy and power industries.

Utilities have been considering alternative rate designs to better align customer behavior with their cost structures in order to increase overall system efficiency. One common approach has been the consideration of demand charges. However, demand charges have significant potential to accelerate the adoption of behind-the-meter storage, even at seemingly low demand charges and low overall electricity prices. 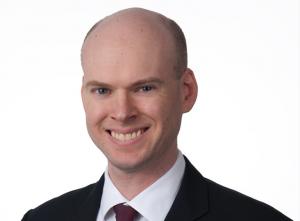 Under current rate designs, fixed charges don’t come close to covering utilities’ fixed costs, so volumetric charges have to be much higher than a utility’s true variable costs to cover the rest of the fixed costs.

While all costs are covered, it is in a pattern that does not resemble the way costs are incurred. Utilities have tried sporadically over the years to fix this misalignment, but it has proven difficult. Regulators are hesitant to approve rate designs that would significantly impact small customers or create equal cost burdens for customers in a given rate class regardless of their consumption.

The combination of net metering, widely available in most states, and rooftop solar has turned this theoretical problem into a real and serious one for utilities. Through net metering, solar customers avoid the volumetric charge for any solar energy they produce and consume. They also typically receive credit for the full volumetric charge of any excess electricity they export to the grid.

This substantially reduces their total volumetric charges paid to the utility, a portion of which would cover some fixed costs of maintaining a safe, resilient grid. However, these customers still benefit from access to that grid. This disparity produces the much-remarked-on cross-subsidization from non-solar to solar customers. It also creates a significant revenue gap for utilities. 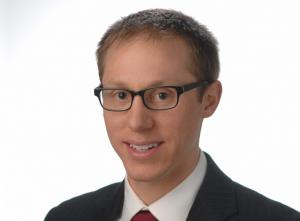 Nic White-Petteruti: Innovation in rate design may suggest additional revenue structures beyond demand charges. One can look to other industries, including telecommunications, for ideas.

As a result, utilities have redoubled their search for a way to manage the mismatch between revenue collection and cost structure. It has often been addressed in the industrial and large commercial segments by a demand charge. While demand charges seem reasonable, they have not been frequently applied to residential and small commercial customers.

Many utilities have begun to view demand charges as a silver bullet to resolve the issues posed by net metering. For example, in June 2016, Arizona Public Service submitted a rate case that included mandatory demand charges for residential customers. After pushback from customer and solar advocates, the Arizona Corporation Commission chose not to allow mandatory demand charges, instead opting for time-of-use rates. APS was allowed to keep its voluntary demand rate and was advised by the ACC to pilot some new demand rate designs.

In February 2017, the ACC approved two voluntary demand rates for Tucson Electric Power, a Peak Demand rate and a Demand TOU (time-of-use) rate. These rates lowered the basic service charge from $13 to $10.04 per month.

In June 2017, Eversource filed a petition with the Massachusetts Department of Public Utilities for NSTAR Electric and Western Massachusetts Electric Company that proposed mandatory demand charges for residential customers owning distributed energy resources. However, that proposal is facing strong opposition from the solar industry and ratepayer advocates. 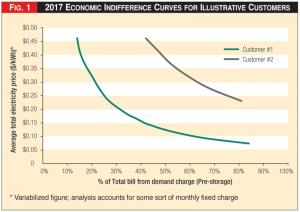 While these examples highlight the industry’s steps toward the implementation of demand charges, utilities are also now recognizing that demand charges can pose potentially serious unintended consequences.

The goal for the utility is identifying rate designs with appropriately sized demand charges. But what size is just right? The answer will be different from company to company. 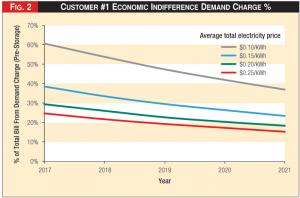 To help companies better understand what rate designs they should aim for, we have developed a proprietary model. It factors in the projected cost of storage, the utility’s average price of electricity, the customer’s consumption profile, and demand charges to quantify the potential savings that a customer could experience with behind-the-meter storage.

Figure One shows two customers’ economic indifference curves toward behind-the-meter storage. We define economic indifference as the point at which investing in storage makes sense today, based on the average electricity price the customer is exposed to and the percentage of their total bill stemming from a demand charge.

With an indifference curve further down and right, we can see that Customer #1 is much more likely to own storage than Customer #2. For Customer #1, owning storage makes sense at 2017 storage costs, if they have an average electricity cost of at least fifteen cents per kilowatt-hour and the demand charge accounts for more than forty percent of their bill. In contrast, storage would only make sense for Customer #2 with a very high average electricity cost and high demand charge situation.

Further exacerbating the challenge is the declining price of storage driven by technical innovation, learning curves, and manufacturing process improvements. Over time, the potential for rising electricity prices and declining battery prices will drastically improve the economics of behind-the-meter storage, in much the same way that rooftop solar has spread to all fifty states.

Figure Two shows the case study’s economic indifference curve for Customer #1 over time, based on the expected drop in storage costs. In 2021, if Customer #1’s average total electricity price is at least fifteen cents per kilowatt-hour, we estimate that owning storage will make sense if a demand charge makes up twenty-five percent or more of their bill, as opposed to roughly forty percent in 2017.

The change over the five-year period is even more pronounced for an average total electricity price of ten cents per kilowatt-hour, where the indifference percentage to a demand charge drops from more than sixty percent in 2017 to less than forty percent in 2021.

The implementation of meaningful demand charges may accelerate the adoption of behind-the-meter storage. For utilities considering a transition to alternative rate designs, especially those looking to add or increase an existing demand charge, the decision is not a simple one.

The potential to incentivize customers into adopting behind-the-meter storage and, in turn, undermining the effect of rate design changes is increasingly possible. This will only be exacerbated by the continued declines in the cost of both solar and storage. Furthermore, innovation in rate design may suggest additional paths and revenue structures beyond demand charges. One can look to other industries, including telecommunications, for ideas.

What are the key considerations a utility should bear in mind before moving forward with demand charges? The second article in this series covers the following key topics: A high-level assessment of the largest utilities’ exposure levels and the importance of the development of a thorough understanding and segmentation of customers.

It will also address how any proposed rate changes will impact customers’ bills. Who are the winners and who are the losers? How will those changes potentially lead to revenue shortfalls? The second article will also address the importance of examining rate design holistically, while looking outside the electric utility segment for inspiration on potential alternative revenue collection methods.