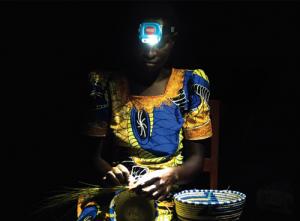 In recent years, the World Bank estimated that ninety percent of rural households in Sub-Saharan Africa still relied on kerosene for lighting needs.

Quickly assessing that upfront costs were a major barrier to LED lighting, Nuru Energy focused on changing the business equation.

“When Nuru was starting out, the team did something others thought was radical: we lived with villagers in Rwanda for two months to really understand how they use lighting,” says CEO Sameer Hajee.

Kerosene, the team quickly learned, was primarily used as a light source for basic tasks such as cooking, studying, and going out to the toilet at night. Despite being dirty to burn and dangerous to use, it was the preferred option for a very fundamental reason: the ability to buy according to what people can afford on a given day. 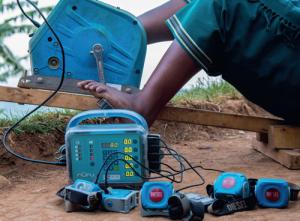 For people earning one to two dollars per day, early surveys found that kerosene could be outrageously expensive. In remote regions, the retail cost can be one hundred and seventy percent higher than at urban outlets. In the poorest homes, using kerosene for basic lighting was found to account for as much as fifty percent of monthly budgets.

This reality of people buying as much fuel as they could afford hit hard for Nuru: the five-dollar upfront cost of its LED lamps made the sales pitch of spending less later completely irrelevant.

As keeping costs down was always a priority for Nuru, the relatively high cost of solar in 2009 was problematic. Moreover, they recognized that solar charging took a lot of time. That’s when they came up with the idea to develop a bicycle charger, the PowerCycle (www.nuruenergy.org).

“Given the high efficiency of human pedal power, we could charge multiple lamps or batteries at once, much more quickly,” says Hajee. 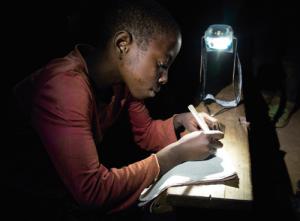 By adding a few basic accessories, Nuru made their LED lights more adaptable to tasks different people in a family might carry out.

The stand-alone pedal generators were sold, usually through micro-credit plans, to village-level entrepreneurs (VLEs) — often individuals who were already running a centrally located store or other service outlet. Most VLEs sell Nuru LED lamps at cost, knowing they can earn steady profits later through recharging fees.

Once the pay-as-you-go charging plan addressed the upfront cost barrier, Nuru saw opportunity to improve the base light with a version that provides room-level illumination and to add mobile phone charging. In turn, this boosted charging needs, without upsetting the model where customers buy what they can, when they can.

Today, Nuru has over one thousand two hundred VLEs across East Africa, all mobile-money enabled, which also makes it easy for Nuru to collect its own micro-finance fees. Having proven the opportunity to recoup money through charging fees has prompted many VLEs to sell lamps below cost and convinced social lenders to cover the full cost of delivering the recharge equipment and lights to the VLEs.

Recent changes in off-grid areas, however, are forcing Nuru to again rethink its business model. Contrary to statistics still reported by big agencies, Nuru’s on-the-ground experience with more than one hundred thousand households shows that kerosene use in East Africa is seriously waning. 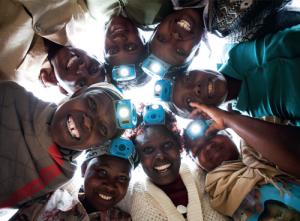 The next generation has much to smile about! Thanks to low-cost lighting for studying and evening tasks, they can see a brighter future ahead.

“As of 2014, kerosene use in villages in Rwanda has been at, or close to, zero. Most households earning below $1.25/day now use disposable batteries for flashlights and radios, spending no more than one dollar per month,” says Hajee.

This is one reason Nuru no longer offers the PowerCycle as a standard charger for its Octopus Charger, the heart of each recharge station. The other reason is the rapid decline of solar panel costs. Under current economics, it is more logical to provide just a sixty-watt panel. Still, the PowerCycle device is a key element for some VLEs. It allows for charging after dark and provides vital back up in regions where the rainy season lasts for two to three months. And speaking of clouds, Nuru is tapping into one for additional value.

“Each Octopus Charger has a built-in GSM module that communicates with our cloud-based server,” says Hajee. “When a device is recharged, we collect data to build a real-time energy consumption profile for the customer. This allows us to better understand our customers’ true energy needs.” For more information on EnAct or how to support it, visit www.en-act.org or www.coldathome.today, or contact our Executive Director at marilyn.smith@en-act.org.