Marilyn Smith is the Executive Director of EnAct.

Lead image: FRANCE — Electric circuits in her house are like old toasters says Fatima. Feeling they are unsafe, she uses an oil stove for heating, moving it from room to room during the day and placing it in the hallway between bedrooms at night. Photo: © Stéphanie Lacombe 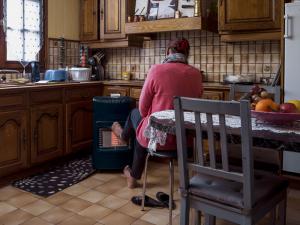 Staying warm in winter or cool in summer is a huge challenge for up to fifty million households in Europe.

Less obvious are the effects of prolonged exposure to temperatures that lie just beyond the comfort range of 59°F to 77°F: sporadic and chronic illness, mental distress, economic hardship, physical and social isolation. When energy costs climb and economies stagnate, these impacts become more prevalent, carrying higher costs for individuals and national health and social systems. 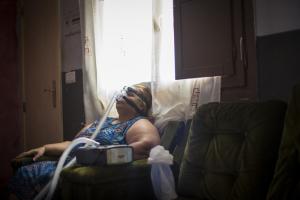 SPAIN — Because of a respiratory condition, Maria del Rocío needs a machine to help her breathe at night and on particularly hot days. Her condition creates a Catch-22; while necessary, the device drives up her electricity bill. Photo: © Edgar Melo-Gutiérrez

With this in mind, the principal aim of the Observatory is to “engender transformational change in knowledge about the extent of energy poverty in Europe, as well as innovative policies and practices to address it.” Led by the University of Manchester, the Observatory welcomes participation by universities, think tanks, policy makers, the business sector and social organizations.

A challenge identified early is that factors leading to energy poverty diff er widely from country to country, as is evident in just four examples. Winters in France are far from extreme: average temperatures in January hover around freezing. But the climate, particularly in the north, is damp and cool, conditions that draw heat from the body and create the perception of being cold. About two-thirds of homes in France were built before 1975 — indeed, in both large cities and rural areas, many are more than a century old — meaning they pre-date energy efficiency codes.

Hungary’s large cities comprise block after block of Soviet-era apartments with long, exposed facades that provide no shading. In summer, occupants report very high indoor temperatures but few can afford an air-conditioner and its electricity costs. Socialist construction and billing principles lead to a different problem in winter. Most buildings are connected to district heating, which can be effective if properly designed and operated. Here, consumers have adequate heating but are trapped with disproportionately high costs. They have little control over temperature and energy bills are calculated according to apartment size, not actual consumption.

Across Spain, day-time highs in July and August often exceed 100°F. The financial crisis that has plagued the country since 2008 is making scorching days more unbearable. In the period 2006-12, a staggering twenty-five percent of Spanish households (seven million people) reported not being able to afford cooling. In 2010, premature deaths linked to energy poverty surpassed fatalities from car accidents. In the Spain case, relatively new factors come into play. Unemployment spiked to twenty-six percent while governments implemented austerity measures. But reforms to energy policy and energy pricing likely had a bigger effect. To increase energy independence and boost renewables, Spain deployed large-scale solar farms and encouraged electrification of energy services, including household heating and cooling. As a result, household energy consumption rose by thirty-three percent during a period (2008-12) when electricity prices jumped by sixty-three percent. 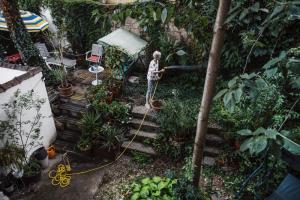 HUNGARY — Living on a tight budget, Lorincné (Kati) Unger, looks for ways to stay cool without using electricity. In the afternoons, she waters the small garden behind her building to help cool the temperature for everyone. Photo: © Janos Kummer

The energy challenge in Sweden’s remote northern areas is less about the lack of electricity and more about frequent outages. Some last only a few minutes, others stretch out over several days. Knowing that outages will come, local residents invest heavily in being well-prepared. Given the country’s strong economic standing, a degree of outrage at being exposed to this vulnerability over several decades is not out of line.

Clearly, a wide range of solutions will be needed to eradicate energy poverty in Europe. A key benefit of the Observatory having been established is a much-enhanced opportunity to exchange ideas and quickly roll out proven solutions. Given the wide-ranging climates in North America, a similar network could have substantial value.

EnAct is pleased to be a member of EPOV in recognition of the importance of effective communication about energy poverty and reaching those affected.