A Day at the Michigan PSC

Michigan enacted a 2016 Energy Law that its Michigan Public Service Commission is in the process of implementing. It's not an easy job. But with a talented group of three commissioners including Chair Sally Talberg, along with Norm Saari and Rachael Eubanks, plus praiseworthy staff, much is getting accomplished. 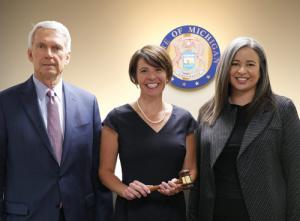 None of the regulatory work is easy. In May 2018, the PSC determined all suppliers had adequate capacity over the next four years to ensure reliability. Reaching that significant milestone in a state with aging power plants took substantial planning. Looking ahead, the Commission is grappling with its new billing mechanism for distributed generation that it will be applying in future rate cases, the recent expansion of its renewable portfolio standard to fifteen percent, updating avoided costs for many 1980s PURPA contracts now up for renewal, and dealing with a series of integrated resource plans to be filed over the next year.

Public Utilities Fortnightly's editor-in-chief, Steve Mitnick, spent a day at the Michigan PSC. He also spoke with Michigan State Senator Mike Nofs, Chair of the Energy and Technology Committee, who is very knowledgeable about the nuts and bolts of the energy industry. Nofs spoke candidly about what makes peninsular Michigan unique and how the legislature works with the PSC, such as through implementation of a strong integrated resource planning process. He believes part of what makes this working relationship possible is having a full-time legislature in place, that allows for devotion to the intricacies of utility regulation.

Articles for A Day at the Michigan PSC: