Key to Unlocking Clean Energy Grid of the Future

Lead image: At left, panelists Mike Jacobs of the Union of Concerned Scientists and Stacey Crowley of CAISO, and at right, Mahesh Morjaria and Eran Mahrer of First Solar, with panel moderator and PUF Editor-in-Chief Steve Mitnick in the center, at a First Solar-sponsored luncheon panel at the recent NARUC Summer Meeting. 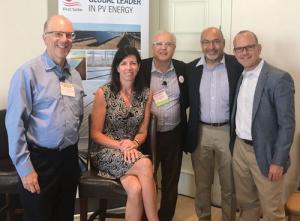 Today's power grid is evolving. In recent years, a confluence of factors has fundamentally altered how electricity is generated, delivered, and consumed.

Prices for utility-scale solar and other renewable resources have plummeted to the point where they are the least-cost new resource for many utilities around the globe. At the same time, the proliferation of new technologies — everything from behind-the-meter solar projects to smart devices to electric vehicles — allows end consumers to interact with the grid in exciting new ways.

These advances have come with consequences; namely, significant changes in the load shape typically served by dispatchable generation resources. Nowhere has the need for modernization of grid-management approaches been more evident than in connection with the infamous duck curve.

Driven by the high level of mid-day solar generation during low-load periods, the duck curve clearly highlights the need for more flexible generation to manage increasing penetration of variable energy resources. To date, much of this conversation focused on adding new, flexible, thermal-generation units to the resource mix. 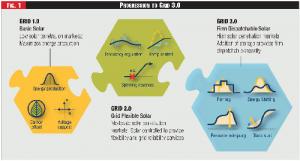 Because of older, inflexible units that have extended must-run times, grid operators typically curtail utility-scale solar projects to ensure that conventional fossil-fueled units can remain online to meet system needs. This view misses the opportunity to leverage solar in a more flexible manner. Through real-time dispatch, utility-scale solar can add value to the system by meeting system needs — just like conventional generation.

In most markets, utility-scale solar is still at modest levels of penetration and curtailment is not a concern. For these markets, the core-value proposition for solar is to maximize the production of energy and renewable-energy credits, where applicable. We call this basic solar, and this approach to development and utilization works well in early-stage markets with little distributed-energy resources or utility-scale renewables penetration.

For other regions, like California, which have achieved moderate solar penetration, some curtailment occurs when load is low, especially during shoulder months. This curtailment is driven by operational needs rather than reliability concerns, and its impact on the economics of utility-scale solar is manageable. 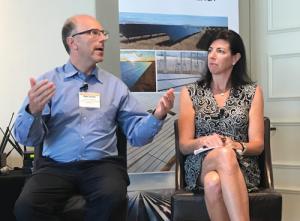 Mike Jacobs of the Union of Concerned Scientists and Stacey Crowley, VP, CAISO, on a First Solar-sponsored luncheon panel at the recent NARUC Summer Meeting.

The least-cost thermal-generation resource, according to Lazard, are gas combined cycles, ranging in levelized cost of energy from 42 to 78 dollars per megawatt-hour. So for new units being added to the grid, even moderately high levels of curtailment should still favor solar over conventional thermal generation.

In addition to economics, curtailment can be a vehicle to provide flexibility and reliability services to the grid. By reserving some planned headroom via under-scheduling or through planned curtailment, solar can provide a host of essential reliability services to the grid. Dispatching solar in this manner creates value through much-needed operational flexibility, helping operators meet the needs of an evolving grid.

Utility-scale solar resources can offer smoother ramping in the morning and evening hours or provide frequency regulation, meeting the flexibility needs of grid operators and overcoming challenges from inflexible conventional generation and distributed energy resources. We call this grid-flexible solar, and we believe this approach is critical to achieving higher levels of solar penetration nationally.

This isn't just a theory. CAISO, NREL, and First Solar proved out these capabilities in a real-world demonstration by leveraging a solar project to provide NERC-identified reliability services including frequency regulation, voltage control, and flexible capacity. 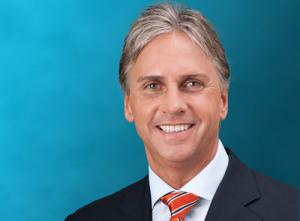 Mark Widmar: Utility-scale solar is a flexible resource today and is quickly becoming the new mainstream generation resource of the future, capable of providing energy when, and how, needed.

CAISO found that solar could provide frequency regulation at eighty-seven to ninety-three percent accuracy, compared to conventional units at forty to sixty-three percent.

Moreover, enabling solar to provide flexible services reduces curtailment overall, as it reduces the overall demand placed on thermal units. If planned for in the day ahead, rather than real-time, this reduces the need to rely upon minimum must-run units that idle on the system in case they are needed.

Rapidly evolving cost-effective storage provides an opportunity to further extend the capabilities of low-cost solar and enables even higher solar penetration. Adding storage to a photovoltaic plant provides the opportunity to reduce plant costs by sharing infrastructure and enabling other value streams that go beyond mitigating plant curtailment. It can align energy production with peak demand.

By incorporating storage, we meet all the core attributes of conventional generation and complete the utility-scale solar product suite with firm dispatchable solar.

For fully evolved grids that have reached peak penetration of variable energy resources and distributed energy resources and that are transitioning toward highly-flexible solutions, the firm dispatchable product blends together all the flexible capability that solar can offer with the firm capacity and energy-shifting capabilities of storage. These enhanced services can fortify solar's place on the grid of the future.

All the functions mentioned above can stand on their own and are simply building blocks as utilities move forward in the grid's evolutionary process.

Each piece of the puzzle — from basic solar to grid-flexible solar and on to firm dispatchable solar enabled by storage — builds on the capabilities of the prior product and creates a complete set of enhanced services for the grid. This full suite of offerings delivers on the promise of solar as a clean, new generation source. Grid operators looking to address flexibility needs and manage high penetrations of solar and other variable resources need look no further.

To fully realize the potential of grid-flexible solar, the solar industry must also evolve. Solar's core product has been based on generating the maximum amount of energy possible at any given time. Current contract structures often reflect that driver.

Moving toward a future where curtailment is an integral part of the most economic new generation solutions will require different thinking on how to structure procurement processes and subsequent power-purchase agreements. Emphasis will need to shift toward availability of capacity, flexibility, and the ability to provide essential grid services.

These capabilities can be utilized through several approaches, but the solution should be tailored to the needs of each utility's service territory. To that end, we look forward to partnering with utilities and grid operators to find both the mix of solar capabilities that best meet their needs, and the right policies to support that mix.

Last, continued demonstration and deployment of these capabilities, with detailed case studies made widely available, will be critical in increasing both the awareness of, and confidence in, solar providing reliability services to the system.

As this vision for grid modernization becomes fully realized, it will become clear to the electricity industry that utility-scale solar is a flexible resource today and is quickly becoming the new mainstream generation resource of the future, capable of providing energy when, and how, it is needed. Follow our continued work on this front on the web at firstsolar.com/Grid-Evolution.