If you and your utility were nominated as an innovator you are a winner. 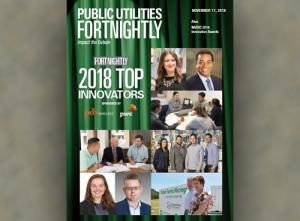 It is a big deal that your colleagues think so highly of your hard work that they took the time to nominate you. Even more impressive is the time you put in to get you here.

You’re being noticed and that’s as it should be. It’s nice to be thought of for making a difference.

Innovators are special because the difference they make doesn’t stop at the utility. Their efforts resonate far and wide to improve lives. It has a ripple effect.

All these innovations will be written and talked about. Then they will be taken further, spawning more notice, investment, invention, and innovation.

Take for example, one of our elite twelve winners, EPRI’s Jamie Dunckley, who partnered with Salt River Project on an industry-first EPRI mission: a one hundred and one-electric vehicle charging project that monitored EVs twenty-four hours a day over one year. That project has already been noticed and pointed to by Tesla and other automakers as the model to learn about the impact of EV-charging. That’s a big deal.

Look at nominee Aron Patrick, lead planning analyst in LG&E and KU’s energy supply and analysis department, who is using data analytics to drive innovation. Part of his project was leading development of the company’s live, online solar generation dashboard so viewers can watch in near-real time while the E.W. Brown solar facility, the largest in the state, generates power.

Demonstrating how solar energy performs in Kentucky is still relatively new. Offering comprehensive, live and historical data that highlights the minute-to-minute variation in solar power, LG&E and KU created a unique opportunity to educate customers and the public about intermittent renewable energy resources in Kentucky, sure to create excitement and lead to a ripple effect in the desire for such offerings.

They innovated their way to methyl anthranilate, a chemical derivative of grape flavoring and an FDA-approved compound safe for people, animals, and equipment, that keeps the starlings away, saving up to one million dollars a day in outages. Now with an annual bird mitigation budget of fifty-six thousand dollars, other utilities are sure to take notice of that solution.

Brent McKinney, director, electric transmission and distribution at City Utilities in Springfield, Missouri was nominated for leading a project that piloted mobile testing for contact voltage faults, technology that has the potential to dramatically affect public safety by more efficiently identifying inadvertently energized surfaces in a community. He has served as public power’s representative on the National Electric Safety Code Subcommittee 8, where he shared his expertise on arc flash analysis. Improved safety catches the eye of everyone.

Let’s not forget the innovations coming with drones. Drones are becoming ubiquitous at utilities and that’s fantastic, especially for safety improvements and cost advantages. An exciting nomination this year was Xcel Energy’s unmanned aircraft systems or UAS program office, led by program manager Eileen Lockhart. In July, Xcel Energy became the first utility in the nation to routinely fly unmanned aircraft beyond the operator’s line of sight thanks to an FAA waiver.

Xcel Energy anticipates inspections can be done with drone technology for $200-$300 per mile versus $300-$600 for employees on foot or $1,200-$1600 using helicopters. The data collected will be shared with utilities to help improve operations industry-wide. More ripple effects.

The truth about innovation is that it all will have a ripple effect. The whole point of innovation is to be bigger and to make a difference beyond one utility. Kudos to all our innovators.