Erika Myers is a principal at the Smart Electric Power Alliance and oversees transportation electrification research. She has over fifteen years of experience in the clean energy sector, with over a decade of electric vehicle experience in the state, private sector, and nonprofit sectors. In a previous position, she oversaw development and execution of numerous clean energy economic development programs in South Carolina.

What would happen in your community if every household with a vehicle had an extra 2,000 dollars in their bank account each year? In a moderately-sized community of 100,000 households with personal vehicles, this could add up to an extra 200 million dollars that could be spent on local restaurants, entertainment, or other local businesses. 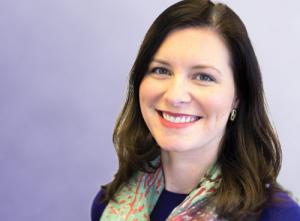 What if utilities could design special economic development rates that promoted this kind of growth? Those new revenues could increase the tax base to enhance investments in education and infrastructure, reduce taxes, and ultimately spur the creation of new jobs and other local private investments. Electric vehicles present massive opportunities to divert billions of dollars spent on gasoline and diesel fuels, much of which leaves the local community, back to local economies and industries.

Utilities should be able to use economic development rates to attract large-scale, private sector investments in charging infrastructure. These rates are designed to be more flexible and more attractive than a standard commercial rate and potentially include financial incentives, such as infrastructure grants, tax credits, and low-interest loans.

This potential impact of such rates is corroborated by a December 2016 report by the National Renewable Energy Laboratory, entitled National Economic Value Assessment of Plug-In Electric Vehicles. The report estimates that under certain national scenarios, EVs could lead to an additional 51 thousand to 118 thousand new jobs each year and an increase in gross domestic product of 6.6 to 9.9 billion dollars per year.

Economic development programs can take numerous shapes — many of which are directly linked to job creation and tax base growth. But in this case, EVs can also help grow the electricity load on a system that then lowers the cost of electricity by increasing grid-system utilization and reducing fixed costs for everyone. 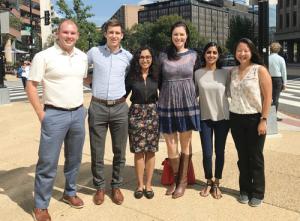 According to a five-state economic analysis report by MJ Bradley & Associates in 2017, titled Electric Vehicle Cost-Benefit Analyses, EVs could lead to a cumulative net benefit of nearly fifty billion dollars in utility electric bill savings for all customers through 2050. Cumulative economic benefits in the northeast and mid-Atlantic regions could be as high as 3,900 dollars per person.

So how do we spur the growth of this industry? According to numerous studies, one of the major factors holding back EV buyers is range anxiety. If more charging infrastructure can be deployed, it will enhance customer awareness of electric vehicles and reduce fueling uncertainty.

As we said, utilities should be able to use economic development rates to attract large-scale, private sector investments in charging infrastructure. These rates are designed to be more flexible and more attractive than a standard commercial rate and potentially include financial incentives, such as infrastructure grants, tax credits, and low-interest loans. 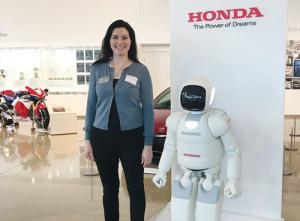 Myers standing next to Asimo at the Honda Heritage Center in Marysville, OH during a tour with the EPRI Infrastructure Working Council meeting in June 2018.

In certain states, such as California, Colorado, or Florida, economic development rates could be a tool. These states don't just require direct job growth to qualify for the preferred rates but include load growth or other tangible benefits to the state as a metric.

California: In California, economic development rates are designed to retain or attract businesses to the state. These rates provide an enhanced discount of thirty percent and a standard discount of twelve percent off their otherwise applicable tariff.

Colorado: In June 2018, Colorado Governor Hickenlooper signed legislation allowing the Colorado Public Utility Commission to approve economic development rates for commercial and industrial users who locate or expand their operations in Colorado so as to increase the demand by at least three megawatts. 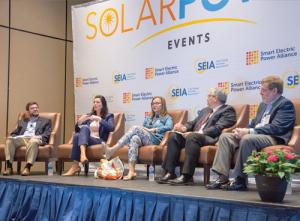 Myers speaking on an electric vehicle panel at Solar Power Southeast in Atlanta, GA in May 2018.

To qualify for the economic development rates, these users must demonstrate that the cost of electricity is a critical consideration in their decision where to locate or expand their businesses and that the availability of lower rates is a substantial factor. The rates may be offered for up to ten years.

Florida: In Florida, the Orlando Utilities Commission has a Com-mercial Industrial Service Rate, which was designed to attract new, large power users to Orlando as part of a competitive economic development location project.

To receive this negotiated rate, potential or existing businesses must meet several criteria. Such as a load of two megawatts or greater, served by a single meter, validation of a lower rate offering outside Orlando's service territory, firm-power contracts (interruptible rates are not eligible), and a power contract will be negotiated after entering into a non-disclosure agreement.

While two megawatts may seem like a lot, a bank of high-powered chargers either for fleets or medium- and heavy-duty truck charging depots could reach that level of demand. 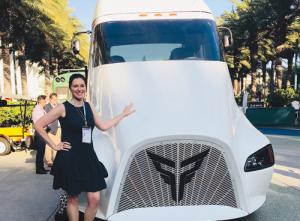 Myers standing next to an all-electric Thor Truck at North American Smart Energy Week in Anaheim, CA in September 2018.

Many other utilities, such as Duke Energy and Florida Power and Light, also have economic development rates, but they are tied to job growth in addition to load growth. While difficult to show a direct increase in permanent jobs for many public charging station projects, it could be strongly argued that the end result in local communities will lead to indirect job growth due to local cost savings as referenced earlier.

Consideration about how to use economic development rates could address or resolve some regulatory filings currently under consideration for commercial EV specific rates for third-party EV charging companies or fleets, by mitigating the need to have a lower-priced rate available for them to use.

Thinking beyond economic development rates, consideration should be given for other creative alternative rate structures. Such as the use of Performance Incentive Mechanisms to incentivize utilities to reach EV deployment targets in their local communities or a return on equity for EV charging infrastructure deployment directly by utilities or through utility-led procurement.

Regardless of the regulatory pathway, the use of economic development rates for EV charging infrastructure will directly benefit local communities and are worthy of consideration as a benefit to the broader community.

In 2019, SEPA will be focused on transportation electrification and regulatory innovation initiatives to help speed the transition to an electrified transportation fleet. For more information, go to our website, sepapower.org.