What Was Served, at the Fortnightly State of State Regulation Luncheon

Kudos to the PUF team on a successful first Fortnightly State of State Regulation Luncheon held February 11, 2019 at NARUC's Winter Policy Summit. I can admit we were a tad nervous at pulling off our first foray into holding such a big event. But with an audience of some two hundred of our closest friends to help us out, we are pleased with the result. 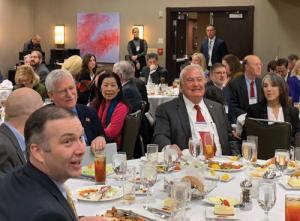 Not only were we there to enjoy good food, camaraderie, and listen to a fascinating panel, we were celebrating Thomas Alva Edison's birthday on the actual day he would have turned a hundred and seventy-two. We had a huge birthday cake with his likeness that you can see later in these pages.

The concept that brought us all together that day is that states are leaders in initiatives, policies, and regulatory approaches addressing the growing movement toward a cleaner and more customer-centric energy future. The panel, among many topics of interest to state regulation thought-leaders, addressed the greatest economic and technological challenges to regulation.

NASUCA's Katz lamented the slow demise or absence of telephone services regulation, noting it seems to be deregulated, largely in many states, and with a similar push at the federal level. She pointed to a lack of any universal service requirement for the next generation of telecommunications services, which is broadband.

Katz also sees what she calls existential threats with respect to what is the reason for needing utility regulation. She hopes we continually remind ourselves that that's the main reason regulators are here.

Chair Finley said the first thing on his list is the growing concern over climate change and the reaction to regulation. When he first started in regulation, the disputes before the North Carolina Utilities Commission had to do with the utilities themselves and the consumer interest. Now, for the most part, the big decisions have to do with environmental concerns and environmental regulations. Also, cybersecurity. Finley candidly remarked, I don't know if economic regulators are best suited to deal with that.

Entergy's Denault finds that if you go back a hundred years, the industry has always done one thing really well and that is applying new technologies to meet the evolving needs of the customer base. Utilities are also the most local community activists of any other industry because they are typically large companies with a lot of local resources.

Denault also said utilities have advanced the ball starting with what does the customer need, and working back to what technology best serves that need from a reliability standpoint? The opportunity that utilities have today, is technology is advancing much more rapidly in ways that we would never have imagined.

But what the customer wants includes reliability of service and sustainability. Utilities have the opportunity to do that and balance the environment, cost, and resiliency of that service, whether it's cyber or physical, or in Entergy's case hurricanes or storms.

EPRI's Mansoor explained that the average customer with a combustion engine car pays three thousand dollars a year buying gasoline. But if that customer replaced the car with an EV, you would be saving one third of that energy cost. He noted that half of the U.S. population does not have a five-hundred-dollar emergency fund. You want to save them a thousand dollars, but to do that you need charging infrastructure, and that takes investment money.

The answer, Mansoor says, is to offer a reduced rate with the smart grid infrastructure, so the electric part of the bill may actually go up, but you're giving a one-thousand-dollar savings. And when you do that with today's emissions of coal, gas, nuclear, renewable, the mix that we have in the U.S., you reduce emissions by one third, at least.

What can we do from a regulatory policy and technology perspective to help customers to reduce one third of their energy, while we are reducing one third of the emissions? Mansoor says we need an integrated view of planning and operations to look at energy as a whole.

From the outside looking in, you can see from a taste of the luncheon that there was a lot to digest. So much was discussed of interest to those who follow state regulation. And the best part is that it was fun! There were a lot of laughs from the panel, as well as serious talk. So, we hope to see you there next year.

Note that the event was not sponsored by NARUC nor was it a part of NARUC's Winter Policy Summit agenda.