Commander Kirk Lippold, U.S. Navy, Retired, was commanding officer of the USS Cole on October 12, 2000 when it was attacked by al Qaeda. A graduate of the United States Naval Academy, he addressed the APS veteran's group on leadership in crisis.

Prior to assuming command of the USS Cole, Lippold served as Executive Officer of the USS Shiloh, an Aegis-class guided missile cruiser; Operations Officer on the commissioning crew of the USS Arleigh Burke; and Division Officer aboard the USS Yorktown, an Aegis-class guided missile cruiser, where he completed a seven and half month deployment to the Mediterranean, and participated in the Achille Lauro aircraft seizure, Black Sea Freedom of Navigation operations against the Soviet Union, and Attain III combat operations in the Gulf of Sidra off Libya, which followed Libyan-sponsored terrorist attacks in Europe.

Fortnightly Magazine - May 2019
This full article is only accessible by current license holders. Please login to view the full content.
Don't have a license yet? Click here to sign up for Public Utilities Fortnightly, and gain access to the entire Fortnightly article database online.

PUF: Commander, give us an overview of that terrible experience you went through in the fall of 2000. That was less than a year before the 9/11 attacks. 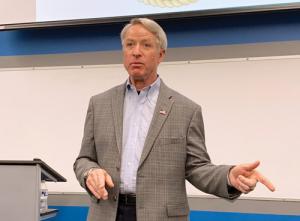 Commander Lippold: One of the things that the Navy does world-wide, is to safeguard what we call the sea lanes of communication. In other words, we are safeguarding all the transit lanes for the free flow of goods and products around the world. Currently, we have a vested interest in ensuring that the flow of oil keeps the world's economies running as it leaves the Middle East headed around the world.

At that point in time I was commanding a guided missile destroyer, the USS Cole, homeported out of Norfolk, Virginia. We had deployed from Norfolk, crossed through the Mediterranean, and transited down the Red Sea. We needed to find a way somewhere between the Mediterranean and the Arabian Gulf to pick up fuel simply because of the distances involved, and we were a smaller Navy. We didn't have many resources in the region.

At about the halfway point, you had two ports that the Navy had negotiated fuel contracts to refuel our ships. One was in Djibouti on the east coast of Africa. The other was in Yemen at the southwest corner of the Arabian Peninsula.