In chilly Calgary, in May, CAMPUT had its annual conference. CAMPUT was the acronym for the Canadian Association of Members of Public Utility Tribunals. But nobody wanted to say that long name anymore. And the word Tribunals is kinda old-fashioned. So they changed the name of Canada's NARUC to Canada's Energy and Utility Regulators but loyally stuck with the original acronym. 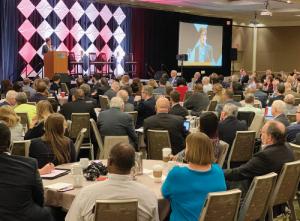 Two of us from the PUF team were there for the regulatory rodeo. As were six American Commissioners and NARUC's exec director. This continues the tradition of CAMPUT and NARUC meeting frequently to share ideas on the regulation of utilities.

PUF interviewed regulators of nine of the ten provinces of Canada: Alberta, British Columbia, Manitoba, New Brunswick, Nova Scotia, Ontario, Prince Edward Island, Québec and Saskatchewan. And of the FERC-like National Energy Board. And of the vast northern territory Nunavut, the frozen home of Inuit villages that reaches to the North Pole.

The similarities between American and Canadian regulators are fascinating and the differences even more so. In some provinces, Canadians regulate the price of gasoline, the opening of gasoline stations, and purchases of farmland and shorefront property. In many, they regulate public power utilities about as extensively as investor-owned utilities.

Resilience against extreme weather, wildfires and cyber-attacks? Distributed energy? Grid and pipeline modernization? They're big regulatory and policy issues on both sides of the border.