Steve Mitnick is President of Lines Up, Inc., Editor-in-Chief of Public Utilities Fortnightly, author of “Lines Down: How We Pay, Use, Value Grid Electricity Amid the Storm,” formerly an expert witness that testified before utility regulatory commissions of six states, the District of Columbia, the Federal Energy Regulatory Commission, and in Canada, and a faculty member at Georgetown University teaching undergraduate microeconomics, macroeconomics and statistics. He dreams sometimes of being an eighteenth or nineteenth century pamphleteer moving the course of events.

It has always been so. The urge to persuade. To bring others around to your point of view, to impact a debate on a regulatory or policy decision. This has been as central a characteristic of the utilities industry as the meter and monthly bill. For as long as there have been meters and monthly bills. 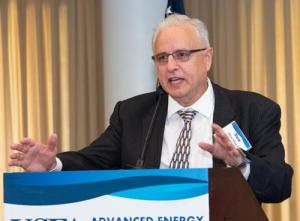 And in utility regulation and policy, we debate almost everything. Debates and endeavoring to move the conversation your way are a constant.

You might ask, why is our industry so disputatious? Other industries seem to get by without a scrum on seemingly every issue big and small twenty-four seven. Even highly-regulated industries like health care. What makes us different? What makes advocating and arguing and rebutting and refuting as natural to us as advertising is to the auto industry?

Well, utility regulation and policy decisions affect the entire public. Everyone depends on our affordability, safety, reliability, and care for the environment. Though isn't that true more or less of the health care and auto industries?

But those other industries — as important as they are — aren't structured for non-stop squabbling. Samuel Insull's model, conceived in the late nineteenth century, still followed today, set up state utility commissions with a semi-judicial mandate to litigate a broad range of utility "requests" to spend and bill and act and refrain from acting.

Layered on in the mid-twentieth century were intervenors. At first state advocates and then lawyers and expert witnesses all wishing a say on behalf of associations of companies and groups of environmentalists among others wanting to influence a commission decision.

Indeed, it's your job, for many of you, to make the case and fight the good fight for this or that, politely but forcefully. No need to be defensive, for it's a perfectly noble profession. The Insull model depends on your best efforts, aiming to find fair, efficient and progressive regulatory and policy decisions from the fights, with the litigants duking it out with all their energies.

Public Utilities Fortnightly was founded in the early twentieth century and flourishes in the early twenty-first century to facilitate this fine line of work. You labor to win enough hearts and minds — just enough — to redirect regulatory and policy decisions toward a positive direction as you see it. So you're happy to use the platform of PUF to promote your perspective. That makes us happy too, it being our mission to publish a broad range of perspectives and produce a beautiful and engaging magazine to showcase these viewpoints.

Though sometimes an article, essay or interview in PUF doesn't suffice. You have a passion for a point of view and a thousand or two thousand words isn't enough.

You wish sometimes you could write a book to really nail your position. Look, take it from me. My book, published six years ago, "Lines Down: How We Pay, Use, Value Grid Electricity Amid the Storm," was pretty good (according to my family and best friends). Yet it took a solid six months of around-the-clock researching, writing, and editing. My day job at the time allowed for that. Does yours?

And at nearly three hundred pages - including the cartoons, which most thought were the best part — although you may not have read "Lines Down" cover-to-cover. That is, if you are one of those blessed souls to have picked up a copy.

There was a time when the greatest minds promoted their perspectives, to win support for their stand, before there was social media, and even before there were books, journals and magazines. This form of influencing the course of events - the short easy-reads of the pamphleteers — dominated until sent to the sidelines in the early twentieth century by long dry treatises in books of hundreds of pages and journal and magazine articles of several thousands of words.

So, I say, you top thinkers out there on utility regulation and policy, consider becoming a twenty-first century pamphleteer. The pamphlets that the new PUF Education & Publications Division will produce and distribute will — like Tom Paine's "Common Sense" and Alex Hamilton's "Federalist Papers" — come in comfortably under thirty pages or so. Just the length that makes it practical for you to write it. And just the length that makes it likely that a good number of influential people in our industry will pick it up and read it through.

As we make Public Utilities Fortnightly beautiful and engaging, and as we see to it that articles, essays and interviews in it gets into the hands of thousands of the industry's thought leaders and decisionmakers, our Education & Publications Division will help you become a Tom Paine for your ideas on utility business models, rate structures, T&D investment, innovation, or whatever.