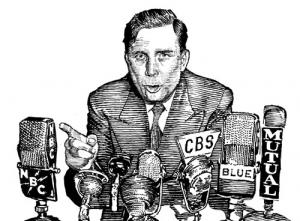 Thomas Edison, the wizard of Menlo Park and inventor of the electricity industry, was born on February 11, 1847 in Milan, Ohio. More on Tom, our most terrific tinkerer, in Public Utilities Fortnightly's special issue this month on electrification.

Wendell Willkie, the electricity industry's undisputed leader through the tumultuous 1930s as president of Commonwealth & Southern Corp., and the Republican Party's presidential candidate in 1940, was born on February 18, 1892 in Elwood, Indiana.

He's the only utility CEO — or utility anything — that has run for president of the United States. Though Bill Clinton did start his political career fighting utilities as Arkansas' attorney general in the late 1970s.

Willkie did some fighting of his own. With the administration of President Franklin Roosevelt throughout the 1930s. As the Great Depression dragged on, he was one of the leading voices for private enterprise versus government intervention in the economy.

In his June 1935 article in Public Utilities Fortnightly, Willkie wrote: "Many companies in 1930 completed generating plants or installed additional capacity already started or planned under the earnest urging of the Federal government that there was a patriotic obligation to continue the employment of people and upon the prediction by government that the financial depression would be of short life."

Willkie's utility holding company, Commonwealth & Southern, was one of the fourteen companies of the so-called power trust, that accounted for over three-fifths of electricity industry revenues in the mid-1930s. Willkie's company, formed by combining Commonwealth Power, Penn-Ohio Edison, and Southeastern Power and Light in May 1929 at the peak of the merger era, alone sold about eight percent of the electricity in the U.S. and received about six percent of electric sales revenue.

The disparity, between electric sales and sales revenue, was because some seventy percent of the company's kilowatt-hour sales were to its industrial customers. Unlike the other large power trust utilities based in the big cities, such as Consolidated Edison in New York City, and Commonwealth Edison in Chicago.

Then, the Public Utility Holding Company Act became law. Under PUHCA's so-called "death sentence," Willkie's company was forced to separate its holdings of operating utilities. They had been assembled to diversify the considerable financial risk of investing the enormous quantities of capital that was necessary to electrify the country, including areas of highly unproven and uncertain consumer demand. And to build the scale suited to attract so much capital.

Ultimately the breakup scattered the Commonwealth & Southern operating utilities that today are in the hands of eight of the largest utilities of today. These are Ameren, Centerpoint Energy, Consumers Energy, Dominion Energy, First Energy, Florida Power & Light, Southern Company, and Tennessee Valley Authority.

After years of wrangling with Roosevelt and his administration, Willkie finally agreed in 1938 to sell key assets of Commonwealth & Southern to the Tennessee Valley Authority. This enabled TVA to emerge in its modern form. Willkie sold the assets for a relatively high price and ended up admired by the public and even FDR.

The president had long been desperate to bring electricity to small-town, rural and poor America. TVA was his first foray to pull this off. Soon after it was the creation of rural cooperatives. The problem was quite real. Commonwealth & Southern for example served Tennessee. Yet in Chattanooga, where two-fifths of the population was African-American, half of them had no electricity at their homes.

By the time of the asset sale to TVA, Willkie had become one of the most famous figures in the world. The May 1937 issue of Fortune magazine, a copy of which is a treasured document in PUF's archives, had lionized him at great length as a perfect combination of the consummate businessman and a progressive, politically, and an intellectual though with a wholesome common man background. "He comes, in fact, from Elwood, Indiana, which is today a town of 10,000 people whose females don't smoke and found Gone With the Wind a little racy ..." wrote Fortune. Wow, times have changed.

When Willkie's incredible rise to contesting the 1940 presidential election with FDR was over, in a decisive defeat to the incumbent, he had long left the world of utilities behind. What was he to do? Well, surprisingly he and FDR were to become friends, in large part because Willkie bucked the isolationist Republican Party by advocating for the president's positions on supporting the United Kingdom's war against Nazism.

During World War Two, Willkie represented the U.S. around the globe including in sensitive negotiations with allies Soviet Union and China. He later became, in his last years, one of the most prominent speakers in the public discourse favoring internationalism - inspiring the development of the United Nations - and opposing discrimination against African-Americans and Jews.