Sharon Allan serves as the Chief Strategy & Innovation Officer at the Smart Electric Power Alliance, where she provides leadership and strategic direction for the organization.

John Pang is a Partner in ScottMadden’s Energy Practice. His focus is on clean sources of energy, sustainable utility best practices, strategic planning and cost management.

In 1881, King David Kalākaua of Hawaii set out on a world tour to introduce Hawaiian culture to the world and to learn more about other countries' advances in modern science and technology. 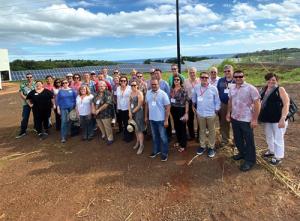 One of the King's travel stops included a visit to the first International Exposition of Electricity in Paris, where he marveled at the displays of dynamos, batteries, and electric light.

Inspired to continue his education in electrification, the King visited the office of Thomas Edison in New York. During long conversations with the American inventor, the two men discussed not only the science of electricity, but also the practicalities and business of selling power.

Upon his return home, the King pursued electrification as a way to bring innovation and investment to his kingdom. In 1886, with great fanfare, the first electrification display was held at the royal Iolani Palace. In just a few short years, at the King's direction, hundreds of residents in the capital of Honolulu boasted electrified homes, while most of the Western world would wait decades for such a luxury.

In the same way Hawaii innovated in electricity production and distribution more than a century ago, the state continues to define the future of electrification, this time through renewable energy resource development and implementation. 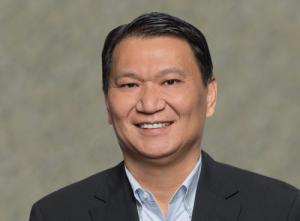 John Pang: The ambitious law requires Hawaii to end its dependence on fossil fuels by establishing a 100% renewable goal by 2045.

Since the earliest days of electrification, imported coal and oil have served as the islands' main sources for power generation. Hawaii still relies primarily on these carbon-heavy fossil fuels, and consequently, the state's electric rates are some of the highest in the nation.

In 2015, the need to deploy alternate fuel sources became even more pressing when the state's legislature passed House Bill 623, setting a goal for Hawaii to achieve one hundred percent renewable energy by 2045. The goal of the law is to save ratepayers millions of dollars and, according to Randy Iwase, when he was Chair of the Hawaii Public Utilities Commission, "get us off fossil fuel." 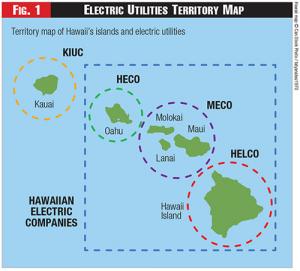 In 2019, Smart Electric Power Alliance's (SEPA) fact-finding mission traveled to the Aloha State with more than twenty energy industry executives to explore the effects of increasing penetration of renewable energy, as well as regulatory and customer engagement strategies in Hawaii.

Hawaii's trailblazing efforts offer valuable lessons for other utilities around the country that are considering or preparing for increasing penetrations of renewable generation. The diverse learnings included planning for long-term goals, enhancing customer engagement, and improving the way the grid is operated.

Understand the Path, Not Just the Goal 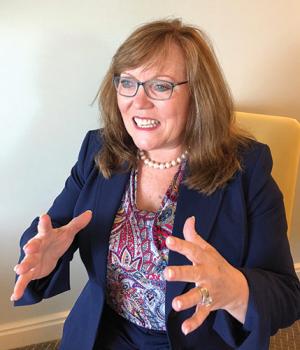 Sharon Allan: Six solar plus storage PPAs rely solely on lump sum payments and do not include any purchases of electric energy.

Hawaii's one hundred percent renewable energy requirement quickly grabbed both media headlines and the attention of electric utilities across the United States. During discussions with energy leaders in Hawaii, we discovered both utilities recognize that decisions made today lay the foundation for long-term success or failure. But these two companies have developed their own unique approaches to meeting the requirements of the RPS law based on terrain, current available resource options, and corporate culture.

Hawaiian Electric is building a path to energy independence by aligning long-term planning and near-term actions. For example, their most recent power supply improvement plan includes utilizing all single-family residential homes and twenty to twenty-five percent of commercial customer roofs to offset energy consumption with distributed photovoltaics (PV) by 2045 in order to achieve RPS targets.

After setting the one hundred percent RPS goal and commissioning detailed studies, HECO realized that even with advances in solar technology, the island of Oahu, which includes Honolulu, would not have enough rooftop and available land area to meet the mandate. To achieve its goals, Oahu would need to locate offshore renewable resources or connect to a neighboring island with an underwater transmission line.

Acknowledging a lack of space for PVs on Oahu, the utility has transitioned away from traditional net metering to distributed energy resource (DER) programs that allow midday curtailment or pay a premium for delivery of excess energy during peak hours. 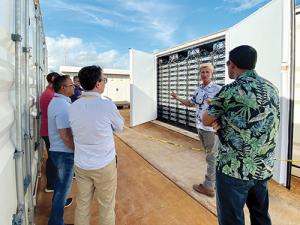 Meanwhile, due to sufficient land availability, KIUC is meeting its mandates and exploring long-term plans with utility-scale solar paired with incremental additions of battery energy storage. Battery storage is crucial for any intermittent sources of power, such as solar and wind energy, so utilities can provide power when the sun is not shining, or the wind is not blowing.

A local economic developer speaking to our fact-finding group noted that stakeholder engagement in energy projects should focus on connections, rather than corrections. Stakeholder connections, he explained, ensure solutions solve tangible community problems rather than focusing on trying to migrate concerned stakeholders from opposing a project to accepting or supporting a project.

Both utilities express commitment to forging strong consumer relationships in order to achieve the state's one hundred percent RPS.

Hawaiian Electric has embraced a unique approach to community engagement whereby challenges are seen as, us problems, not, you problems. This idea of Kakou, that we are all in this together, has shaped both their engagement strategy and the resulting solutions.

One example of success in community engagement involves a portion of Oahu that relies on a single-transmission substation, creating significant reliability challenges in the event of a severe hurricane. The local community expressed strong opposition to the addition of new generation to improve reliability.

During community meetings, Hawaiian Electric detailed the community's vulnerabilities and strengths in the event of a severe storm. The meetings — now called potlucks because everyone is expected to contribute — produced new ideas. Instead of new generation, the utility and community are considering critical service hubs —a series of buildings designed to operate independently from the grid using mobile emergency generators.

For KIUC, open and transparent communication proved vital during a recent island-wide outage.

On July 21, 2019, a sustained fault at Kauai's largest generator, the Kapaia Power Station, triggered an island-wide outage for two and a half hours. With generators already offline for maintenance and cloudy weather dampening the output from solar systems, rolling blackouts ensued.

During the blackouts, KIUC immediately sent out regular Facebook and radio announcements to keep customers updated on restoration status and encourage energy conservation. The co-op's members remained engaged and appreciative of the updates during and after the event.

Relearning How to Operate the Grid

The electric grid has undergone multiple transitions over the last century, each requiring changes to utility operations. With a push toward high penetrations of renewables, electric utilities once again need to rethink how to operate the grid. In Hawaii, electric utilities are on the cutting edge, and in some cases, the bleeding edge of grid modernization.

Historically, PPAs relied on reverse chronological seniority for curtailment, meaning the newest projects were the first to be curtailed when oversupply was an issue. In response, renewable energy developers inflated the cost of their power to account for the high degree of uncertainty and risk created by the curtailment.

The developer is not the only one benefiting from the new contract. The RDG PPA allows the utility to dispatch output from the renewable system — even if the dispatch order falls below potential output available.

Six solar plus storage PPAs approved by the Hawaii Public Utilities Commission in March 2019 rely solely on lump sum payments and do not include any purchases of electric energy.

To increase visibility into the grid impacts of high-penetration of renewables, KIUC's grid modernization investments include deployment of high-speed data recorders on its electric system. The recorders capture detailed system data and allow the utility to pinpoint and address root causes following island-wide outages.

More recently, the utility recorded unique frequency oscillations moments before an island-wide outage. KIUC is further consulting with industry experts to better understand and learn from this event.

Since 2015, Hawaii's electric utilities have operated under a bold vision requiring one hundred percent of their energy portfolios to consist of renewable energy resources by 2045. Such a mandate has spurred new planning and operating paradigms.

Both of the islands' utilities offer new and innovative technologies and services, actively transforming the role of the electric utility from a commodity supplier to a community engaged service provider.

Electric utilities on the mainland do not have to grapple with isolated island grids, instead benefiting from a large and interconnected electric system. Yet, a surprising number of the lessons learned from the fact-finding mission extend to the mainland.

The growing number of state or utility commitments to one hundred percent clean energy goals will require enhancements to long-term planning, customer engagement, and grid operations. Even without these ambitious targets, growing penetrations of renewable energy will require new approaches.

The fact-finding mission ended with participants convinced that Hawaii's electric utilities will remain trailblazers. They are not only meeting state mandates, but they are inspiring nationwide energy innovation that is economically, socially, and environmentally sustainable.