Social Distancing in the Most Collaborative Industry

Steve Mitnick is President of Lines Up, Inc., Editor-in-Chief of Public Utilities Fortnightly, author of “Lines Down: How We Pay, Use, Value Grid Electricity Amid the Storm,” formerly an expert witness that testified before utility regulatory commissions of six states, the District of Columbia, the Federal Energy Regulatory Commission, and in Canada, and a faculty member at Georgetown University teaching undergraduate microeconomics, macroeconomics and statistics. Even he has abandoned the handshake for the elbow bump.

What's the point of being an American, really, if there's no March Madness? If there's no Disney World? And if there's no Tom Hanks? Ok, I get it. There's no crying in baseball. But, what are we to do if there's no MLB either, or NBA, or NHL? Say it ain't so Joe. 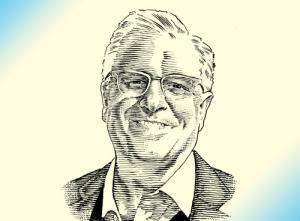 Like me, are you down with the coronavirus blues too? True, that's far better than testing positive. But a bummer, nonetheless. Oh, excuse me for a sec. I need to wash my hands again, for no less than twenty seconds.

The cancellations have come, much like a system blackout, suddenly shutting off the lights to our industry conferences. CERAWeek, gone. Electrification 2020, gone. I was scheduled to go to Accenture's International Utilities and Energy Conference, in Rome. Of course, that's not happening. That's the epicenter of epicenters. Since Rome was off the table, I was now free to attend EEI's Annual Global Electrification Forum, in Washington D.C. Well, that's also not happening now. All these events are going, going, gone.

Makes me wonder — as a natural worrier, I'll freely admit — about the great conferences this June, MARC 2020, in Grand Rapids, the APPA National Conference, in Long Beach, the EEI Annual Convention, in Austin. I just know this crisis will blow over by then. At least, I hope it does.

For the coronavirus conflagration conflicts with a core characteristic of our industry's culture. Our companies, cooperatives, and commissions constantly collaborate. It's what they do. It's what they have done since the days of Samuel Insull, trading notes, learning from each other, celebrating the best practices and practicers.

The National Electric Light Association, EEI's predecessor, was founded in 1885, just three years after Pearl Street Station started up, powering the first electric distribution system. Its geeky logo by the way depicted Ohm's Law, which was considered quite cool in those days. From the beginning, NELA's Annual Convention was the information-sharing clearinghouse for the industry's technological, operational, and financial development.

The National Association of Railroad and Utility Commissions was founded soon after, in 1889. NARUC (renamed the NA of Regulatory Utility Commissioners in the early twentieth century) similarly had the goal of conferring across state boundaries on what was working and what wasn't. The stakes rose in the year 1907 when Insull's proposal at the NELA Annual Convention of nine years before - to have state commissions regulate utilities' rates and service - finally took hold, first in Wisconsin, New York, and Massachusetts and eventually in all the states. The PSCs, PUCs, and so forth now had awesome responsibilities that could be used well to promote the public interest - or not so well or even abused, and so networking nationally became imperative.

The other major utility associations — APPA and NRECA — were founded during the second world war, out of necessity to negotiate with the Roosevelt Administration over the rationing of critically-needed equipment and supplies. And they too followed the tradition of annual conferences, also to better understand what was up and what was down in Illinois or Indiana or Iowa and put the lessons learned to work in Michigan or Minnesota or Mississippi.

By the time I became a regular at these conferences they had grown in scale and importance. The most pressing issues of the day — such as energy independence, integrated resource planning, energy efficiency, nuclear prudence, deregulation, stranded costs, regional grids and markets, energy trading, Enron's collapse, computerization, digitalization, reliability, sky-high natural gas prices, rock-bottom gas prices, climate change, demand response, cybersecurity, customer centricity — were strenuously debated at these periodic gatherings as they were in the pages of PUF throughout the year.

We are arguably the most collaborative industry. So when social distancing mandates the cancelling of these get-togethers, as is taking place now, it's jarring and disruptive to the ways we work.

I miss you guys. I cannot wait until this virus loses its ability to frighten and harm humans. Then, at that time, finally, we can happily return to our concert venues to see Taylor Swift or Ed Sheeran (or even Motley Crue), and to our parades, marathons, and museums. But most of all, I cannot wait until that glorious day when we can get together again, at the conferences of our industry's great associations like NARUC, NASUCA, CAMPUT, APPA, NRECA, EEI, and EPRI.

We might still need to elbow bump instead of handshake or hug. That's ok. I can live with that. As long as we can see each other again, and talk through our perspectives and prescriptions on utility regulation and policy. That'll be more than good enough for me.