Utility Regulator by Day, an Artist After Hours

It came to our attention at the NARUC Winter Policy Summit this February that NARUC First Vice President Paul Kjellander, also the President of the Idaho Public Utilities Commission, is an impressive artist whose paintings are on display throughout the Gem State including in the State Capitol. So naturally we requested he submit one for publication in Public Utilities Fortnightly. 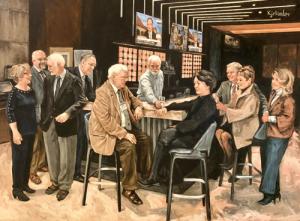 And here it is, quite appropriately highlighting some of the most respected figures in utility regulation and policy.