The Mid-Atlantic Conference of Regulatory Utility Commissioners, MACRUC for short, went full-speed ahead with its annual event in June, the Annual Education Conference, albeit virtually. MACRUC began the conference on June 15 with the always popular Commissioner kick off Q&A. Here's some excerpts from this great session, moderated by Iowa Utilities Board Member and former NARUC President Nick Wagner, and some screenshots of the participating Commissioners. 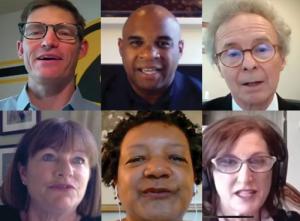 Dan Conway of the Public Utilities Commission of Ohio: Ohio is in a different place geographically and in some respects from a policy perspective than some of the other states in the MACRUC footprint. We had, last year, legislation enacted that changed the policy approach for our renewable portfolio standards that have been in place in Ohio. They capped or actually reduced the rate of escalation for the renewable portfolio standards in Ohio.

Previously, they had been ramping up towards price, something close to twelve and a half percent of energy provided by renewables by 2026. The legislature changed it to a cap of around eight and a half percent. So that's been reduced to some degree.

At the same time, the legislature also provided support for roughly a thousand megawatts of utility scale solar in the same legislation. So it actually provided some additional policy support for renewables that had not previously existed. I would say that if you had to characterize the Ohio approach at this point, it's changed the emphasis on mandates to more of an economic efficiency standard for encouraging renewable resources.

At the same time, on a different dimension, Ohio has seen a lot of efforts on the economic development front to encourage new industry, particularly new high tech industry, to locate in Ohio. Ohio is in a pretty good location logistically, both from electrical and natural gas supply standpoint. Also the highway networks are very robust north, south, east, west through Ohio.

Pipelines, the same thing. There's a lot of good infrastructure in place in our part of the world here in Ohio. So economic development wise, Ohio has been very focused on attracting high tech firms.

Of course, the high tech firms are very interested in getting their energy supplies on a carbon neutral, or green, or renewable basis. Interestingly, at the same time, as I just pointed out, that we've migrated to a more economic-based support for renewable resources emphasizing the mandates approach. At the same time, we are, I think, making a strong effort and had some success in attracting high tech companies who really have as part of their mission statements, reliance upon renewables.

Ohio provided support and assistance for the efforts by them and the utilities that serve them to procure their energy supplies on a renewable basis. That's another element of the Ohio approach that's probably worth noting.

I would also say Ohio is not different in this respect, but there has been a fairly continuous and regular effort to improve and modernize interconnection procedures and standards for customer sited generation. And to encourage net metering, and in Ohio get us more on an economic basis than it is on an, I'd say, put your thumb on the scales basis, which is the approach in other areas of the country.

Nick Wagner: President Fiordaliso, what will be the impact on the Commission given the potential loss of revenue by regulated utilities in the first three to six months of this year?

Joe Fiordaliso of the New Jersey Board of Public Utilities: Budgets, as you well know, as everybody knows, are down the river. What New Jersey did was extend the fiscal year. We extended it until September 30, with the hope that it will allow some revenue to start coming in.

We're in a position, however, where the amount of revenues that the state is receiving obviously is not up to what was anticipated. The income tax filing has been delayed until July, just as the federal government delayed theirs. And so that revenue is coming in slowly. Obviously, our Commission is financed by assessments primarily.

We're a little bit different because, as probably most Commissions, we don't operate on the state budget. However, we were asked by our Treasury Department to take a look at our budget and see if there are any excess funds, if there are any places where we can cut back and reduce costs.

We're in the process of doing that currently. It's unfortunate because as Kim [Drexler of the Delaware PSC] alluded to, we have a robust, clean energy program in the state of New Jersey. Not only wind, we'll actually be going out for a second solicitation by the end of this year for about twelve hundred megawatts. Our first solicitation was eleven hundred megawatts, which has already been awarded and going forward.

We're in a solar transition. We have over a hundred and forty thousand solar installations. We just passed a comprehensive energy efficiency program for the state and our utilities. Of course, all of this costs money.

Nick Wagner: Chair Phillips, how can we work together within the MACRUC region to ensure that utility communication networks are secure and sufficiently robust enough to address these and future issues?

Willie Phillips of the District of Columbia Public Service Commission: We've made grid modernization a priority. We have to approach the issue of communications with that same sense of urgency.

There was a principal from my school who said that they weren't going to grade children this semester because, to the extent that they were grading kids, we should know that what we're grading is privilege. Not everybody has the same amount of connectivity. Not everybody has the same access. If I'm working on a computer, my wife's working on a computer, one of my children may not have a computer.

This isn't about utilities, but it is. Because if we're going to make the investments that we need to make to get our communications where they need to be, we have to educate the people. We have to have them understand that there are investments needed for something that they think works. But we have to have a level of reliability that's even greater in this time.

I'll also add that if we were going to do this, we have to do it affordably, but we also have to have a state, local and federal plan. It has to be a priority on every single level.

Nick Wagner: [MACRUC] President McCabe, what do you see as the greatest priority and/or challenge in getting back to business as usual, and what can utilities do to assist in doing so?

Brooks McCabe of the West Virginia Public Service Commission: Initially, it's the ratepayer protecting the ratepayer. The communities, at least in our state, West Virginia, we have been devastated. I think this has happening in much of the MACRUC states. So, how to look at the ratepayers? How to protect them?