Kasparas Spokas is an associate at The Brattle Group with a focus on electricity sector topics such as renewable and climate policy analysis, electricity policy design, and market design. Kasparas received his Ph.D. in Civil & Environmental Engineering from Princeton University and was a fellow at the university’s public policy school.

Katie Mansur is a research analyst at The Brattle Group with a focus on utility financial analysis, wholesale power market modeling, pipeline ratemaking, and risk assessment. Her background is in economics from Northwestern University.

Frank Graves specializes in regulatory and financial economics for electric and gas utilities, and in litigation matters related to securities and risk management. He has over thirty years of experience assisting in forecasting, valuation, and risk analysis of many kinds of long-range planning and service design decisions.

For decades, carbon capture, utilization, and sequestration (CCUS), a technology that captures emissions and sequesters them into geologic reservoirs or products, has been heralded as a means to clean up power plants and decarbonize emission-heavy industrial processes that lack clean substitutes. 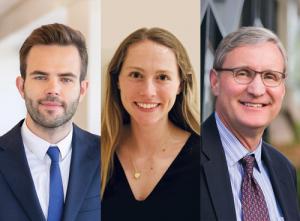 However, development of CCUS for commercial power has been minimal due to policy risk, lack of economic incentives, and uncertainty of competing technology evolution. Recently, expanded tax incentives have rekindled interest in CCUS.

Under some circumstances, these can improve the economics to the point where carbon capture does not impose net incremental costs. However, retrofitting coal remains less cost-effective today than replacing the aging fossil fleet with new renewables and storage in most circumstances.

This has led to carbon capture being sometimes regarded as the ugly duckling of emission reduction technologies, viewed by detractors as a technology for bailing out fossil interests rather than expanding our portfolio of clean technologies.

Despite not yet being a low-cost decarbonization option, studies focused on long-term deep decarbonization have shown that the value of non-intermittent, dispatchable emission-free power, which carbon capture can provide, is likely to be substantial and qualitatively different than today. 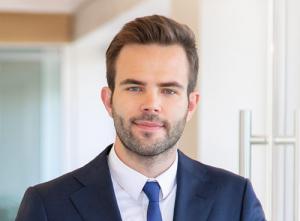 As states, cities, and utilities strive toward deep decarbonization, they may find that complementary solutions become essential to achieving clean energy targets reliably at reasonable costs. Supporting emerging technologies such as CCUS today will ensure a more diverse set of technologies are available as we approach complete grid decarbonization.

CCUS is a technology that captures carbon dioxide at point sources and disposes of it permanently in porous geologic formations deep below the earth. The emissions are trapped in place by overlying impermeable caprock formations, which cap the fluids and prevent upward migration.

It is estimated that the United States has over two thousand gigatonnes of geologic storage available. For reference, the U.S. power sector emitted 1.6 gigatonnes of carbon dioxide in 2019 (one gigatonne from coal) - so there are centuries of available storage capacity.

Geologic storage of fluids is not new; the Sleipner project off the coast of Norway has safely injected carbon dioxide under the North Sea for the past twenty-five years with no evidence of leakage. Currently, there are nineteen operating projects worldwide. The U.S. oil industry already sequesters sixty million tonnes of carbon dioxide annually into geological formations for enhanced oil recovery (EOR) operations, which can increase extraction rates by ten to twenty-five percent. 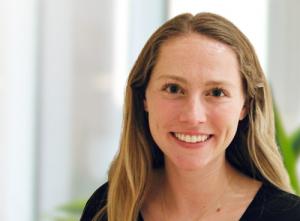 EOR increases local production by utilizing existing resources while sequestering emissions, while having little to no impact on the largely demand-driven oil market. The ability of CCUS to contribute to EOR is a primary reason it has seen bipartisan political support.

Development of carbon capture has been slow in the electricity sector, where high costs, lack of incentives, and cost overruns of a few pilot projects (Kemper and Boundary Dam) have left only two operational carbon capture power plants in the world. 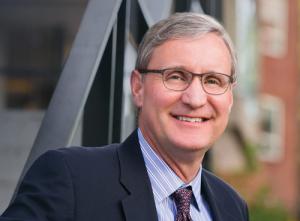 This result is shown in Figure 1, where we compare the levelized costs per net megawatt-hour of power sold to the grid of a depreciated coal plant without and with a post-combustion retrofit (with net savings indicated by the drop in the hollow circle on the right panel of cost bars). While Figure 1 focuses on the overall economics of the retrofit, it is worth noting that these incentives reduce the short run marginal costs as well. 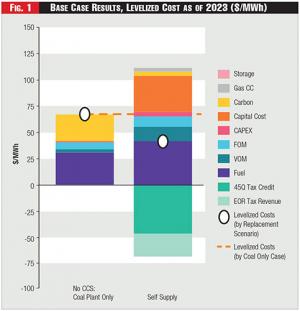 Assuming a rising carbon cost penalty starting at twenty dollars per tonne in 2023, the net-present value of our representative coal plant's to-go costs over sixteen years is roughly four billion dollars. We find the 45Q tax credits provide roughly fifty dollars per megawatt-hour if the capture facility is sized for the plant's total capacity. (Smaller capture facilities for a given plant size would yield diminished impacts of 45Q per megawatt-hour.)

Along with the EOR revenues, savings under these assumptions more than offset the costs of a carbon capture retrofit, resulting in net-present value savings of 1.4 billion dollars relative to the plant cost without capture. This analysis does not contemplate changes in dispatch between the "without" and "with" CCUS cases, and it assumes that a coal plant would be viable with a meaningful carbon price and a sixty-five dollars per tonne to-go cost.

Other critical assumptions in our analysis included capital cost estimates, replacement energy options, the size of the capture facility, and regional considerations regarding the level of a carbon tax and/or access to EOR. 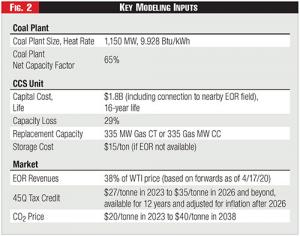 Despite falling costs and growing incentives, the limited number of carbon capture plants warrants a thoughtful consideration of the risks that could impair economic feasibility of CCUS.

Figure 3 presents sensitivities on how various alternative cost and market conditions (the horizontal bars) alter the net costs of the capture project. Capital costs are a key sensitivity. While recent cost estimates have been optimistic, previous project cost-overruns reveal a meaningful risk of higher-than-anticipated capital costs.

Another assumption is the replacement power option, which depends heavily on both regional economics and regulatory obligations. Here, we primarily evaluate CCUS assuming that the coal plant provides replacement power by running at a higher capacity factor, although we acknowledge that gas plants or even market purchases could also supply this energy, albeit likely at higher cost.

There are also uncertainties on the benefits side, where we find that CCUS needs either a substantial carbon price or access to EOR revenues to break even against the same plant without carbon capture. 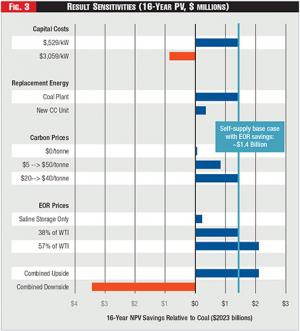 Without EOR, carbon capture operators must pay (rather than be paid) to store the captured carbon. While the 45Q tax credit is scaled up for non-EOR applications to compensate operators for the lost EOR revenues and associated increase in storage costs, the increase is likely not large enough to fully offset the costs of dedicated storage.

Although this analysis focuses on coal applications, post-combustion capture is also feasible for natural gas. Present day capture technologies and associated incremental costs are estimated to be similar to those of coal retrofits, but there is almost no actual experience with large-scale gas carbon capture. This is likely because of the general lack of material carbon pricing, coupled with the lower emission rates of gas plants and concerns that CCUS may limit the flexibility of the retrofitted plant, which in turn could compromise the load following benefits of gas.

However, for new gas-fired plants, an emerging Allam-cycle technology developed by NetPower promises to both be as operationally flexible as present-day natural gas power plants and capture emissions with little-to-no incremental cost or water consumption requirements (the latter often being cited as a problem with present-day technology). Many in the industry see this technology as key for large-scale carbon capture deployment in the future. 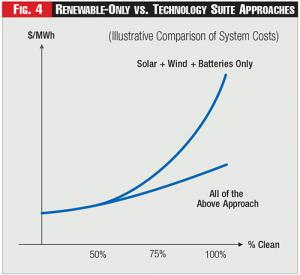 Our analysis shows that incentives can completely offset CCUS retrofit costs in some circumstances today. However, a retrofit today is still more expensive than replacement with wind and solar, as long as the penetration of intermittent renewables remains low.

This result was documented in a recent case study of Public Service Co. of New Mexico's San Juan Generation Station. While a cost-only comparison ignores other reasons, one might choose carbon capture, such as job preservation or further utilizing existing infrastructure, the economic case for CCUS retrofitting today remains uncertain. In the future, however, that may change.

Carbon Capture in a Decarbonized Grid

Studies have shown that once wind and solar become the vast majority of generation, they create operational challenges and high costs for incremental reliability and resilience. Without significant long-term, large-scale storage, of which there is no existing good alternative beyond pondage hydro, renewable generation droughts and seasonality can create long periods with low output that could periodically require several days' worth of energy storage plus the installation of much more renewable capacity than is necessary to meet near term demand.

That aspect of diminishing returns ultimately makes it a very costly problem. Under those circumstances, the availability of non-intermittent technologies like CCUS has been shown to potentially decrease deep decarbonization costs by up to fifty percent. This highlights the need for a suite of such technologies to satisfy future decarbonization aspirations.

Which technologies will ultimately be most cost-effective to provide this generation remains unknown. It is unlikely that there will be a winner because of the need to fit solutions into highly differing market contexts with varying degrees of renewable potential. There are considerable uncertainties regarding the cost, performance, and circumstances for emerging non-intermittent clean power technologies, all of which appear similarly untested.

Many non-intermittent clean technologies need to be researched and developmentally encouraged so they are ready when we need them, such as carbon capture, long-term battery storage, renewable natural gas, advanced nuclear, gas with offsetting direct air capture, hydrogen, and perhaps many others.

The Brattle Group's recent study of New York's electricity system evolution to a zero-emission system highlighted the value for emerging technologies, using renewable natural gas as a proxy for potential zero-emission technologies. Utilities will need to evaluate the tradeoffs of competing technologies to ensure cost-effective deep decarbonization, as opportunities will vary regionally.

For widespread deployment of carbon capture, issues beyond technology improvement will also have to be resolved. Widespread deployment will require a carbon dioxide pipeline network to transport captured emissions, which could present siting and not-in-my-backyard planning challenges.

In addition, contracting complexities regarding risk sharing on production volume guarantees and off-taker payment assurance over long contracts will need to be determined. Note, however, carbon capture for power production could have synergies with energy-intensive industries like cement or fertilizer production where capture is the likely method of emission reduction. Furthermore, power production via carbon capture can utilize existing electricity transmission infrastructure and avoid new transmission sometimes required for renewables.

In order for carbon capture to achieve scale and resolve technical and cost uncertainties, regulated utilities and other stakeholders will need to help proactively foster its development, likely before its economic case is compelling (as was the case for solar and wind).

Incentives have been rising: the U.S. federal government recently expanded tax credits for carbon capture, and both Department of Energy's Office of Fossil Energy and ARPA-E have put out grant solicitations in recent years.

State commissions and legislatures have a unique opportunity to further support utilities in this development process by allowing them to consider various emerging technologies and develop early projects to gain experience.

Early deployment and learning-by-doing will likely make later use of carbon capture more economical, better understood, and possibly important as a meaningful decarbonization technology in locations or conditions when we might need it most.