Overcoming Racial Inequality Then and Now

PUF member organizations and readers will receive later this month my new book, "Lewis Latimer: The First Hidden Figure." It tells the inspiring story of this extraordinary founding father of our industry, and the challenges of being the sole African American at the apex of the nation's commerce during the many setbacks on the road to racial equality. 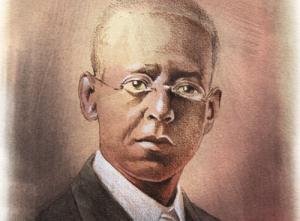 With the cover painted by the First Vice President of NARUC, an introductory essay by the retired Executive Vice President of the Edison Electric Institute (who himself broke down racial barriers), the startup of the PUF Latimer Scholarship Fund with the American Association of Blacks in Energy, and many beautiful illustrations of Latimer's life and work, the book should have a large impact.

Here's a sample from the book:

Latimer had played that pivotal role in one of history's greatest inventions, the telephone. But by the fall of 1879, three years later, Latimer is just a paper hanger in Bridgeport, Connecticut. He had moved his family to the South End there — a melting pot neighborhood of Irish, Hungarians, African Americans, etc. — near where his sister Margaret and her husband lived, in the hope his prospects might improve in this renowned center of late nineteenth century innovation.

Just after the extraordinary experience with Bell, and after leaving the employ of what was now called Crosby and Gregory, Latimer began a new section of his journal, which he entitled Electrical Recollections. From that point on, he was an electricity man. 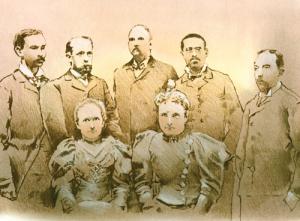 Thomas Edison’s Legal Department. Lewis Latimer in the back row, second from the right.

Latimer had stayed in Boston for a couple more years, working first for another patent lawyer, Joseph Adams, and then at Esterbrook Iron Foundry. But Bridgeport and the many opportunities there beckoned.

Of Bridgeport, Latimer wrote that it was:

"... a perfect hornets' nest of industries. The place is perfectly alive with inventors and it would be next to impossible to throw a stone into any company of men ... without hitting one."

Oddly, Bridgeport's mayor in the years immediately before, until 1876, had been none other than Phineas Taylor Barnum. That's right, it was P.T. Barnum that said, "there's a sucker born every minute." By the time Latimer arrived, Barnum had abandoned politics and focused his energies on promoting his Barnum & Bailey Circus.

Fortunately, aside from paper hanging, Latimer had a side gig at a local business, Follansbee Machine Shop, in his chosen profession of draftsman. And who would walk into that machine shop but Hiram Maxim, the serial if eccentric inventor. Yes, that's right, this is the same man who five years later invents the machine gun, for which Maxim is best known, and is most reviled. The machine gun was first used in battle less than a decade later in what is now Zimbabwe, when British colonial police killed fifteen hundred Ndebele warriors while losing four of their own force; with but five of the guns Maxim developed.

Maxim over the years secured patents for an odd collection of innovations, including the hair-curling iron and the fire sprinkler. A serial bigamist, marrying three women in his lifetime without divorcing any, apparently conceived of and was the first to perform the magic trick of sawing someone in half, in the first instance a parlor maid before an audience at his London home in 1910.

The Maxims were quite a family. In later years, Hudson Maxim, Hiram's brother, invented smokeless gunpowder. Though, since the patent was issued to H. Maxim, Hiram and Hudson fought over the rights and remained distant from then on. And then there's Hiram Percy Maxim, Hiram's son, who invented the firearm silencer.

Maxim spots Latimer in Follansbee Machine Shop in February 1880 and is amazed and delighted. By Latimer's standout skill as an industrial draftsman, and indeed as a "colored" draftsman. Maxim immediately hires Latimer, as Maxim's general assistant and as well as a draftsman.

Latimer wrote in his diary, "Within a week from the time we first met I was installed in Mr. Maxim's office busily following my vocation of mechanical draughtsman, and acquainting myself in every branch of incandescent light construction and operation."

It's fateful that the eclectic Maxim is, at this time, into electric lighting. Indeed, his United States Electric Lighting Company is Thomas Edison's top competitor in this new field that is about to explode. By the fall of 1880, only two firms are marketing incandescent lighting systems, Maxim's company and Edison's. Maxim actually has the edge on Edison. Maxim's filaments last longer, in part due to Latimer's inventiveness. "My lamps gave fully twice as much light for the power consumed as Edison's original lamps," said Maxim.

Maxim resented Edison's salesmanship of what in our time might be called vaporware, and he once remarked, "Every time I put up a light a crowd would gather, everyone asking, 'Is it Edison's?' As Edison had never made a lamp up to that time, I was annoyed and told [U.S. Lighting Company's founder Spencer D.] Schuyler that the next time anyone said that I would kill him on the spot."