What a Derecho Is

Lori Burkhart is the Managing Editor of Public Utilities Fortnightly.

I first learned the word derecho in the dark on a sailboat tied up at the St. Michael's Maritime Museum on the Chesapeake Bay on a Friday night in late June 2012. I looked at my phone screen and saw a long, straight, red storm line, unlike anything I ever had seen before, aiming for us. We began throwing anything not attached to the deck below and battening down the hatches. 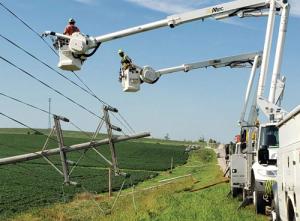 Baltimore Gas and Electric subsequently on July third said of the derecho that brought seventy mile per hour winds and cancelled Fourth of July events all over the area, that six hundred eighty thousand customers were without power and compared the event to hurricane-like damage. It turned out to be a multi-state event, with some four million customers without power, and became the day, as the press called it, that many learned what a derecho is.

This October's Cover Story, on the Iowa Derecho, is hard to fathom in that the National Weather Service measured wind speeds at one hundred and forty miles per hour. The jaw-dropping wind speeds are made even more hard to believe when you understand derechos come without warning.

The nice aspect of hurricanes and many storms, if we have to pretend to find something good about them, is they usually give time for preparation and staging of crews outside the perimeter of danger. Then those amazing crews rush in and get services restored for people anxiously waiting.

Not so with the derecho, which means "straight" in Spanish for the straight line of the storm that you watch coming at you with dread. In fact, after that 2012 derecho, when we were still without power at our home in Arlington, Virginia after a week, we made the decision to put in a generator.

Now, in 2020, you'll hear Terry Kouba, President of Interstate Power and Light, an Alliant Energy subsidiary, and Dusky Terry, President of ITC Midwest, talk about what they went through in Iowa when the derecho came straight for their communities.

Flattened tree canopies and corn crops, downed power lines and towers, were but part of what Iowans had to contend with, as any storm recovery is made more difficult during a pandemic.

Utilities helping customers decarbonize is a big deal. This is especially true as more utilities are setting net-zero targets by 2050 or earlier. How to get there involves big questions and finding the right people to give those answers is key. So PUF brought in some heavy hitters with Jan Vrins and Dan Hahn of Guidehouse to ask the right questions of CEOs, along with PUF's Editor-In-Chief Steve Mitnick.

In this issue you will hear from CMS Energy's CEO Patti Poppe, Duquesne Light Company's CEO, Steve Malnight, and Portland General Electric's CEO Maria Pope on their perspectives and tangible actions their companies are taking to meet their decarbonization and customers' decarbonization goals. There is a lot to take in on strategies, investment and divestiture plans, business and regulatory models, products and services, and operations.

PUF never forgets NARUC in these pages. Here we have part two
of a special look at the USAID-NARUC Cyber Guide, aimed squarely at regulators, who more often recently are tasked with evaluating the prudency of the investments in keeping utilities cyber secure. That increasingly large task comes with yet another set of acronyms and need for more education placed squarely on the backs of busy regulators who already have too much to do.

That is why NARUC's Regina Davis and Marisa Lewis point out the importance of this guide to regulators and the utility industry. We all know cyber attacks are not going away and the need for cybersecurity grows, so be sure and check out NARUC's latest. You might even learn a new acronym.

Conferences are hugely important in our industry and the last in-person conference I attended before the pandemic shut down was the NRECA annual meeting in New Orleans in early March. That annual meeting is beautifully enshrined in PUF's April 2020 issue. It feels to me like the conference industry went dark after that, as we all tried to find our footing and figure out a new normal while dealing with COVID-19.

But then this summer, conferences started coming back. It was a dribble at first. Now we have the tsunami. That is why you will find in this October issue, PUF Staff attended four virtual conferences. It's wonderful to be seeing familiar faces and be introduced to new ones, albeit on various virtual platforms. After all, we in this business are a friendly lot, based on past meetings and get-togethers.

My preference is for in-person anything. Of course, that is not to be for a while, apparently until we have a vaccine. PUF Staff meanwhile is gratefully attending virtual conferences. In this issue you will find the Edison Electric Institute, American Association of Blacks in Energy, American Public Power Association, and Electric Power Research Institute, convening on the biggest issues of the day. Take a look inside for the latest.