Mandy Olson, PE, is Engineering Manager for the Transmission & Distribution Group at Burns & McDonnell with more than a decade of experience, specializing in the design of electric power substations. She is an active member of CIGRE and IEEE.

The American job market has had a rough ride in 2020, with unemployment numbers reaching dizzying levels. Opportunities for job growth are a much-needed balm for a bruised economy. 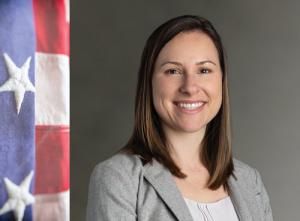 Interestingly, the movement toward greater reliance on renewable energy and reducing carbon emissions could offer some potent possibilities for job creation.

The drive toward decarbonization and the urgency of an economic boost could combine to incentivize policymakers to initiate changes that would support infrastructure buildouts for integrating renewable energy resources and increasing electrification of the transportation sector.

The University of California, Berkeley, released its 2035 Report earlier this year, examining the prospects and effects of a concerted effort in the United States to get to ninety percent carbon-free electricity by 2035. Much of the technology to decarbonize the grid already exists. Better yet, it is becoming more affordable.

With prices declining for many renewable technologies, even areas with less robust renewable resources are becoming viable options for siting. The industry is poised for rapid growth, and the economy stands to benefit at a time when it needs a boost.

The UC Berkeley report was accompanied by a policy paper from Energy Innovation that outlined policies that could support ninety percent clean energy adoption, leading to five hundred and thirty thousand jobs each year through 2035.

Such setups are especially attractive for legacy generation sites where renewables might be added without having to go through a fresh, time-consuming grid interconnection process.

More greenhouse gas emissions in the United States come from the transportation sector than any other, including power generation. As the country moves toward decarbonization, electric vehicles are poised to become a significant player in the market.

At present, EVs remain a relatively niche product, but the adoption rate is growing as the technology improves. To achieve large-scale EV adoption - and the carbon reductions it would imply - it will be necessary to continue a substantial build-out of electrical infrastructure to support that significant shift in load profile. All that infrastructure work has the potential to create a lot of jobs.

Some have imagined that the increasing popularity of ride-hailing services like Uber and Lyft could lead to a reduction in vehicles on the road and the emissions associated with them. Reality has proven to be a little more complicated.

Some people are hailing rides for short distances they might otherwise have walked, ridden a bike or taken public transit. When those ride-hailing vehicles are not on an assignment, they often are being driven aimlessly or otherwise sitting idle, continuing to emit greenhouse gases.

Recognizing the potential for improvement, Lyft released a white paper in June 2020 in which the company committed to converting to an all-EV fleet over the next decade. As EV prices continue to decline, large-scale adoption of electrified transportation becomes much more plausible. It also would make an even stronger argument for an electrical infrastructure build-out that could create a lot of job opportunities.

The trends favoring a shift to clean energy and widespread EV adoption could play big roles in reducing our carbon footprint over the long haul. But the infrastructure work underlying the growth of those trends has near-term potential to boost employment in an economic environment that could use some good news. Policymakers and other stakeholders should consider the benefits over both time frames as they plan their priorities.