Elections Done. Regrets and No Regrets.

Steve Mitnick is president of Lines Up, Inc., editor-in-chief of Public Utilities Fortnightly, and author of Lewis Latimer, The First Hidden Figure and Lines Down, How We Pay, Use, Value Grid Electricity Amid the Storm. He was formerly an expert witness that testified before utility regulatory commissions of six states, the District of Columbia, the Federal Energy Regulatory Commission, and in Canada, chief energy advisor to the Governor of New York, CEO of a transmission development company, a member of McKinsey & Co.’s and Marsh & McLennan’s energy consulting practice leadership teams, and on the faculty at Georgetown University teaching microeconomics, macroeconomics and statistics.

You might have heard. Recently, the United States held national elections. As I am writing this, however, the past tense hasn't been universally accepted. There are some aspects of the elections that have dragged on and on, and on. Certainly this is the case in the great State of Georgia where, due to a couple of U.S. Senate runoffs that will determine that august body's majority control, the drama is destined to stretch all the way into January. 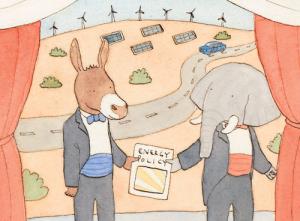 Nonetheless, I asked a gaggle of our industry's top thinkers to tell us, in this issue of Public Utilities Fortnightly, their thoughts on the nation's agenda for energy and utilities given the election results. So you can imagine these experts were glued to the television sets on election night, and on the next day, and the next day, and the next, writing and rewriting and rewriting their essays that are herein.

It seems fair that I should chime in too. As a matter of fact, I do have some views about what should come next in energy and utilities once the elections are behind us.

Generally speaking, I'm all in for no regrets policies. You ask, what are those? Fair enough. Well, upping our game in enhancing end-user energy efficiency is one. It's a priority that can be embraced across the political spectrum. Senators Lisa Murkowski and Joe Manchin of their parties' miniscule moderate wings are likely itching to pass such legislation. In doing so, we can decarbonize, lower customer electric bills, and create field jobs, a lot of them, quite economically. What's not to like? Even by a divided government in Washington.

Enhancing end-user energy efficiency is hardly the sole no regrets policy that Washington can and should put into action. Another one is increasing long-distance transmission capacity, which can be thought of as an enabler, making economical the most productive renewable projects that can be located in our vast country's plains and deserts.

But it's challenging - to say the least - to complete a transmission project in less than a century (exaggerating only a little). When first hearing about a project, landowners quickly become opponents. Companies with competing assets and projects become opponents too. Other regional players who might be allocated a percentage of the project's costs join the opposition as well. Little wonder that such projects are a slog.

As an old transmission developer, I've come to accept that the heavy hand of government is necessary to tip the scales, to increase the number of projects that are completed from a trickle to a tidal wave. If we consider interstate transmission projects as essential enabling infrastructure akin to the interstate highway projects of yore, then government can indeed step in and mitigate the opposition from all sides. Ok, I know, I'm dreaming. The idea is particularly fanciful as we face the reality of divided government and divided views on climate change.

Though, please allow me the solace of some optimism. I do expect the time shall come when the imperative for power highways from our plains and deserts to our cities and suburbs will command broad support for government intervention.

The prospects are better to get government even more behind energy research and development. We need, especially, economical ways to store electrical energy for days and weeks, not just for minutes and hours, ways to produce and transport hydrogen, and ways to keep existing nukes chugging away and to manufacture new modular nukes. The need is now as I see it, if we're to commercialize these technologies by this decade's end.

Then there's the priorities our industry can move along smartly without much care about the federal government's foibles. Utilities, utility regulators, and developers are aggressively increasing the nation's renewable capacity and generation, in the middle of the country, notwithstanding the fate of the renewable electricity production tax credit. If the feds ease the siting of offshore renewables after Inauguration Day, all the better.

Utilities and regulators are also investing, pretty intensely, actually, in making the high, medium, and low voltage grid more resilient, more cost-efficient to maintain, and safer. Examples abound. I particularly admire the hardening of the southeast's grid with metal poles and undergrounding lines, by Entergy and Florida Power & Light, the application of artificial intelligence to keeping southern California's lines from sparking fires, by San Diego Gas & Electric and Southern California Edison, and the monitoring of Rocky Mountain lines by overhead drones operated from miles away, by Xcel Energy.

Which brings me to what we're already doing, but additionally the promise of what we can do further, in transportation. As the President-elect often says, hey folks, and here's the deal. We should and are electrifying the transportation sector. This is an enormous undertaking that only through a full-court press by utilities and regulators can the nation make this happen at the needed pace. So I close with another common saying of the incoming guy:

"Every time I'd walk out of my Grandpa Finnegan's house up in Scranton he'd yell, 'Joey, keep the faith.' And my grandmother would yell, 'No, Joey, spread the faith, spread it.'"