December 19, 2013: At this writing, 2013 is drawing to a close. Over the past year, several key industry trends emerged or became clearer. Among them, one topic arose in the industry’s collective consciousness more than any other: “microgrid.” 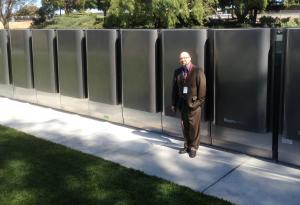 The author poses in front of a Bloom Energy Server installation at the fuel cell company's corporate HQ in Silicon Valley.

On the heels of 2012’s Superstorm Sandy – and amid rapid growth in distributed generation (DG), demand response (DR), and other distributed energy resources (DER) – the microgrid concept emerged as one of the most interesting trends of 2013.

Some people in the industry – including senior executives and regulators – think microgrids could be revolutionary. They might herald a new kind of industry architecture, ultimately supplanting the centralized utility grid with a new cellular topology. This idea might not be as crazy as it sounds, with some compelling evolutionary trends in that direction. However, many people are more skeptical about microgrids, acknowledging prospects for sizeable growth in developing countries, but doubting microgrids will gain much traction in the U.S – or most of the developed world, for that matter, apart from certain customers who require highly resilient services.

At the same time, the various technologies that make microgrids work are definitely improving, in terms of performance and economics. Likewise, regulatory and business frameworks are starting to evolve in ways that support commercial projects, although they remain at a fairly nascent stage.

That brings us to the purpose of this article, which is to identify the five most important microgrid milestones of 2013. Important milestones still lie in the future, but the path forward certainly became clearer with these developments.

#5: Microgrid Institute Launched: I’m blatantly biased because I’m the one who launched it, so this can be seen as pure shameless promotion – and also full disclosure. But the fact of its existence is significant, irrespective of who’s involved. Indeed, others are pursuing related ideas, including (to name a few): the Perfect Power Institute, the Global Microgrid Center, the Energy Future Coalition, and a new advocacy group that just formed, called the Microgrid Resources Coalition – through the offices of law firm Drinker Biddle & Reath. In short, during 2013 many people began looking more carefully at microgrids, and new organizations formed to sustain such efforts. That’s a noteworthy milestone.

#4: Interconnection Standards Evolved: Ratification was still pending at the time of this writing, but IEEE proposed some important interim changes to its DG interconnection standards, with the expectation of a more complete overhaul effort beginning in 2014. The interim amendments provide ride-through provisions for grid-tied DG, and clarify standards for intentional islanding. Also the Federal Energy Regulatory Commission (FERC) is amending its guidelines for Small Generator Interconnection Procedures (SGIP) and Agreements (SGIA) to accommodate DG growth and microgrids. Both sets of standards provide models for many states’ small generator interconnection policies, and their updates will help microgrids and other islanding DG systems connect safely and affordably. The next step will be standards that serve more comprehensive system integration and control, so DERs can serve grid efficiency and reliability, rather than detract from it.

#3: States Took Action: Several states either began exploring the microgrid concept or moved forward with concrete programs to support development. Most notably, Connecticut’s Department of Energy and Environmental Protection (DEEP) awarded grants in the first round of a program to support development of community energy projects, and announced plans for a second round. Other policy initiatives moved forward in California, New York, New Jersey, Massachusetts, Maryland, and others. Some states convened workshops and commissioned studies. (More disclosure – I served as primary author for Minnesota Microgrids: Barriers, Opportunities, and Pathways Toward Energy Assurance, a U.S. DOE-funded white paper study commissioned by the Minnesota Department of Commerce as part of the state’s Energy Assurance Plan.) Interest among state policymakers bodes well for microgrids, because it forms the basis for reviewing and adjusting industry regulations to support cost-effective and competitive development.

#2: DoD Took Action: Military customers represent a large segment of the potential microgrid market, and in 2013 the U.S. Department of Defense awarded major contracts for onsite energy work – not all for microgrids, but for major components of them – totaling several hundred million dollars. The Army and Lockheed Martin commissioned a microgrid at Ft. Bliss, and the U.S. Northern Command started a project at Ft. Carson. The Navy began developing microgrids at Pearl Harbor and Camp Smith, the Pacific Command HQ. West Point Military Academy is thinking along similar lines. Thus DoD’s work on microgrids represents the second most important milestone in 2013, and portends major project opportunities in the coming years.

#1: Microgrid Hype Peaked: The industry buzz about microgrids belies a basic fact: the advanced microgrids that people usually talk about are relatively scarce things. By some reckoning, only a handful of really sophisticated microgrids of appreciable size are operating in the United States today, with another few handfuls at various stages of deployment around the world. (Of course there are tens of thousands of backup power systems all over the place, but sophisticated, smart microgrids with active load-balancing systems for sustainable islanded operations are fairly rare.) Additionally, several major corporations are installing new onsite energy systems that can be described as microgrids, or that set the foundations for them. But unquestionably, the microgrid topic became overhyped during 2013 – and some signs suggest that hype might have reached its peak. Some of the most recent microgrid market studies have scaled back growth projections – suggesting that a dose of reality is beginning to slow down the hyperventilation.

If hype is indeed beginning to diminish, it bodes well for microgrid development over the next few years – as we leave behind the “peak of inflated expectations” (in Gartner Group hype-cycle parlance), go through the “trough of disillusionment,” and move toward the “plateau of productivity.”

Over-hype is a problem because many companies that initially were very excited about the microgrid business have been disappointed to find that while potential opportunities might abound, economically viable and financeable projects are only just beginning to emerge. Such disappointment is detrimental to microgrid development, because it can lead to the conclusion that microgrids are all hype and just a pipedream without really substantive market potential.

That conclusion would be wrong.

For now, microgrids remain a premium product, most applicable primarily for two general customer groups: 1) Those with facilities deemed critical for various reasons, including national security, public safety, disaster recovery, and corporate risk management; and 2) remote sites that either have no electricity access or suffer with unreliable and expensive service. Those are important customer groups, to be sure, but they represent a small segment of the overall economy – and building microgrids to serve them won’t revolutionize anything. It will just strengthen our infrastructure in the industrialized world, and will serve economic development in markets that need it most.

Microgrid milestones achieved in 2013 create a solid path toward that future, irrespective of overhyped expectations in the short term.

ABOUT THE AUTHOR: Michael T. Burr is editor-in-chief of Public Utilities Fortnightly, and separately he serves as director of Microgrid Institute.