President Obama’s trip to the United Nations is infusing the People’s Climate March with new energy. While the president is now encumbered with defeating the Islamic State, the cause of mitigating global warming is still gathering steam. 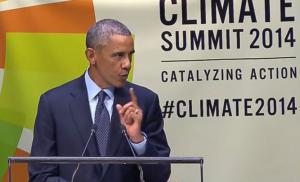 As to how those heat-trapping emissions are minimized, though, is up for debate. Lots of cards are in the mix, notably the U.S. Environmental Protection Agency’s Clean Power Plan. Here, natural gas-fired generation would largely supplant coal-fired facilities and thereby help to cut the level of greenhouse gases.

But that’s where Obama and those marchers present in New York City diverge: Many of the “People” want to completely do away with fossil fuels, which the president knows is not just impractical but also economically harmful. The United States, in fact, is now the top oil-and-natural gas producing country in the world, surpassing Saudi Arabia and Russia, respectively.

The reason: By using hydraulic fracturing, developers are able to extract those resources from deep underground and from the rocks where they are embedded. The United States is well ahead of the rest of the world. And while many environmentalists may bemoan the fact that more drilling leads to more production – and more emissions – others don’t see it that way: Burning natural gas results in roughly half the emissions regulated under the Clean Air Act than does coal.

“Clearly, you will impact jobs in coal states,” says Christine Todd Whitman, former governor of New Jersey and the former administrator for the Environmental Protection Agency under  former President George W. Bush, in an interview. “But the overall energy strategy is changing and is geared toward more natural gas, which also creates jobs and which has fewer greenhouse gas emissions.”

The implications are vast. In 2000, natural gas provided for 16 percent of the electric generation mix. Now, with the shale gas revolution, it is expected to be 27 percent of that portfolio by 2020. That share is expected to continue to increase, reaching 35 percent by 2040, surpassing coal-fired power, according to estimates from the U.S. Energy Information Administration.

Meanwhile, coal-fired power has fallen from 50 percent of all power generation in 2007 to about 40 percent — a trend that will continue. Already, carbon emissions are about 10 percent less than they were in 2005.

The Obama administration is enacting stricter air quality rules that also include proposals to restrict greenhouse gases, all of which are favoring natural gas facilities over the competition. The Clean Power Plan is the most recent submission. But others have already been enacted and they have cleared the courts: sulfur dioxide, nitrogen oxide and mercury, for example.

Just how has the culmination of regs manifested itself in markets? About 8,800 megawatts (MW) of utility coal capacity was retired in 2012 while an approximate 5,781 MW was taken off line in 2013, according to SNL Energy, a market research firm. SNL adds that roughly 28,000 MW of coal capacity will go by 2022. Of the total that will be eliminated, 11,000 MW will get converted to other types of fuels. Most of that will be natural gas, and to a lesser extent, biomass, it adds.

Natural gas’ fortunes have only recently changed: In 2004 and 2005, the forecasts were very different from what they are today — that the United States would need to import vast amounts of natural gas in the form of liquefied natural gas, or LNG.

As such, the country was designing its infrastructure to receive those LNG imports, which not only contribute to foreign energy dependence, but also to overall energy prices: By the time that fuel is transported and subsequently re-gasified, the cost of the end product adds up.

“It has been an incredible decade,” says former Energy Secretary Spencer Abraham, in an interview. “We have gone from one end of the spectrum to the other. It’s hard to tell how realistic EPA will be on issues such as fracking: It is reasonable to take into account all sides of the equation, including economic growth when it comes to issuing regs.”

Fracking, short for hydraulic fracturing, entails pumping a concoction of water, sand and chemicals deep underground so as to help unlock the shale gas, or shale oil. That development has given the United States at least a century’s worth of natural gas – new supplies that have kept such prices low and in the mid $4 range.

Civic activists and environmentalists are concerned that fracking may taint drinking water supplies — that the chemicals used in the process would flow back up to the surface. Producers say that they understand the anxieties and that they are doing everything they can to ensure that the process is safe, which includes cordoning off entire areas to prevent the escape of dirty “flow-back.”

“If everything is done by the book, the environmental impact is minimal,” says Radisav Vidic, chair of the department of civil and environmental engineering at the University of Pittsburgh, in an interview. “Moreover, just by switching from coal to natural gas, there is a dramatic impact on carbon dioxide emissions, not to mention sulfur dioxide, nitrogen dioxide and mercury,” he adds. The first two emissions lead to acid rain and smog, while the latter one is harmful to pregnant women and children.

President Obama has used his EPA to clamp down on those harmful emissions, all things that have endeared him to the green movement and alienated him from those in heavy industry. His Clean Power Plan proposed in June is no different: It would cut carbon dioxide emissions 30 percent by 2030, in large measure by having utilities switch from coal to natural gas.

Circling back to the thousands who took to the streets in New York City this week: To them, natural gas remains old school – full of the same toxins as coal, just less of them. And, producers must still extract that product from the earth’s surface, which not only leaves an ugly footprint but which could potentially foul drinking water supplies.

“There is no question that global warming is real and that 7 billion people have impacted the world’s climate,” says Senator Joe Machin, D-WV. “There is also no doubt that fossil fuels will be part of our energy portfolio for years to come.”

Manchin, whose comments were delivered during a hearing to discuss EPA’s Clean Power Plan, notes that coal and natural gas, together, now provide 68 percent of the country’s electricity. But he cautions that EPA will, at some point, get natural gas in its sights – the same way it has done with coal. He emphasizes that coal-fired generation has cleaned up its act – that emissions have dramatically fallen since the Clean Air Act was first enacted in 1972.

Certainly, coal will continue to play a key role in America’s energy portfolio. But the fact is that natural gas is the path of least resistance – easier to get permitted while it is just as plentiful and just as cheap, all compared to coal.

In the minds of some environmental groups, that’s a start: The Breakthrough Institute, for example. But, in the eyes of most others, it falls short. They are the ones pushing society to get off of its fossil fuel fix and to move increasingly – and at greater speeds – to renewable energy, which now accounts for 10 percent of energy consumption and 13 percent of electricity generation in this country.

To the latter group, natural gas is an obstacle to that greener future. To the Obama administration, though, it’s a “bridge” fuel, or something to hold us over until wind and solar energies can lock into the market place. As such, natural gas can be used to “firm up” wind and solar power when the weather does not permit. Hence, natural gas would complement – not compete with – renewable energies, making the whole generation and delivery process more reliable.

Natural gas has never been considered a panacea. But it is an immediate tool to help clear the air and usher in more green energy – a dynamic that will force President Obama and many of the UN’s climate marchers to take different paths.

Sign up to receive Spark by mail by using this link.