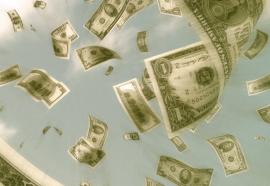 The consequences of short-sighted rate making.

Gas utilities and state commissions must work together to help preserve rates of return, encourage conservation, and lower customers’ bills.

Conservation programs, plus an erosion in domestic manufacturing, will lead to a falloff in gas demand.

FERC Commissioner Vicky A. Bailey named Robert H. Solomon as her new attorney advisor for electric matters. Solomon has been with the Office of General Counsel since joining FERC in 1988. He has held key positions such as Deputy Assistant General Counsel for Electric Rates and Corporate Regulation.

Daniel Bollom, WPS Resources Corp. CEO, has been promoted to chairman of the board. Larry Weyers, senior v.p.-power supply and engineering, was promoted to president and COO of both WPSR and Wisconsin Public Service Corp., one of WPSR's holdings.

Charting Regulation in '95: Put on Your Lifejackets!

State and federal regulators and the industries we regulate have donned life jackets. It's as if we are boating down the unexplored Grand Canyon with John Wesley Powell1 in 1869. We share a vague vision of what lies at the mouth of the canyon, but the rapids are treacherous and uncharted.

On the river, boatmen and women often scout the tough rapids from the shore. Back on the river, they carefully set themselves up at the proper position and angle, then apply deft, sometimes powerful, strokes at crucial moments.

R. Paul Grady has resigned as v.p. of corporate development with UGI Corp., a holding company with utility and propane marketing subsidiaries, to become v.p. of sales and operations at its wholly-owned subsidiary AmeriGas Propane, Inc.