My grandmother — born in 1898 — didn't have electricity at home growing up. Nor did her children, including my dad — born in 1925 — until the thirties. 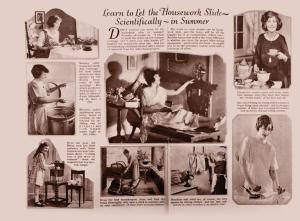 By the time of my childhood, in the fifties, residential electric service had become universal. Moms benefitted especially. They now had vacuum cleaners, refrigerators, washers, irons, toasters, sewing machines and more. Electric servants spreading through our society dramatically eliminated one drudgery after another.

This was the first era of the Electricity Age. High-wattage electricity turned heavy motors and heated filaments. This subtracted mind-numbing time-consuming tasks and added hours to our days.

The second era started in the seventies. By now a far wealthier society, with the home filled with electric servants, low-wattage electricity animated semiconductor-based electronics. Not so much to lift our burdens but to enrich our lives.

As the aughts turned into the teens, in this century, digitization became commonplace. This upped electricity's game again, for the third and present era of the Electricity Age.

At the dawn of the Age of Electricity, Thomas Edison and George Westinghouse wanted - fervently - to better our lives with lighting and motorized applications. Edison and Westinghouse, as Craig Roach points out in his new book "Simply Electrifying," worked backwards from applications. That's what drove the two great inventors to develop cost-efficient and reliable provision of electricity.

When utility regulation later rewarded investment in the provision of electricity, and when entrants focused on the applications of electricity, Edison's and Westinghouse's successors turned their focus away from applications. Utilities ultimately became grid companies, perfecting the platform for applications to plug and play.

Environmental pressures further pushed utilities from how people used electricity. The premise was that utilities promoted applications - like the all-electric home - to increase demand to increase profitable infrastructure investment. This was strongly discouraged. Reddy Kilowatt, the mascot that celebrated electricity's applications, was retired.

Electric cars. Electric heating. And a slew of new life-enriching applications from robots to 3D-printing to virtual reality to drones to who knows what.

With this renewed interest and involvement in applications of electricity, will we need new regulatory mechanisms? How else can we ensure the public fully benefits from this third era of the Age of Electricity?