Yesterday was Nikola Tesla's birthday! The inventor of our alternating current-based electricity system was born on July 10. 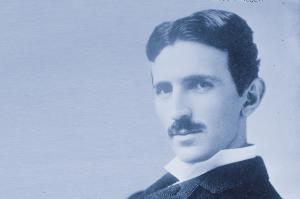 It was May 16, 1888. Near the opening of his famous address to the American Institute of Electric Engineers (now IEEE), at Columbia University, Tesla stunned the audience with these words:

"The subject which I now have the pleasure of bringing to your notice is a novel system of electric distribution and transmission of power by means of alternate currents, affording peculiar advantages, particularly in the way of motors, which I am confident will at once establish the superior adaptability of these currents to the transmission of power and will show that many results heretofore unattainable can be reached by their use; results which are very much desired in the practical operation of such systems and which cannot be accomplished by means of continuous currents."

In the great Graham Moore novel, "The Last Days of Night," George Westinghouse says to his lawyer Paul Cravath, while both are listening to Tesla's speech:

"If you could make the thing work, well, your lights would last longer. Your motors would spin faster. Oh, and, by the by, the distance you could send this electricity would be far greater."

Craig Roach's fascinating new book, "Simply Electrifying," tells us that Westinghouse wasn't in the audience that day. But he soon visited Tesla's lab in lower Manhattan and struck the deal that founded our industry. Tesla got five thousand in cash, fifty-five thousand in Westinghouse Corporation stock, and two and a half dollars for every horsepower of electrical capacity that would be sold.