Each of the fifteen speakers at Public Utilities Fortnightly’s Summer Summit Soapbox Luncheon, at the NARUC Summer Policy Summit in Indianapolis, had two minutes to make their pitch. Seven from state utility commissions — six Commissioners and one Staff — three from utilities, three from vendors, two from associations. 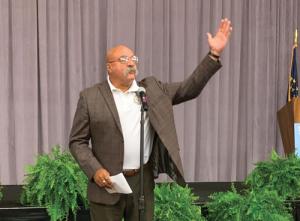 Three finalists for the coveted Most Electrifying Speech were chosen by co-emcees NARUC president Nick Wagner and yours truly, all Commissioners. Then the two hundred gathered in the room voted for the winner by their applause. Janet Gail Besser of the Smart Electric Power Alliance made the call, the winner being Commissioner Johann Clendenin of the Virgin Islands PSC.

“Friends, Commissioners, and Eligible Telecommunications Carriers, lend me your ear! Regulating and jurisdiction of Unified Telecommunications… To be, or not to be! That is our question. To decide to be involved or committed. Recalling your breakfast of eggs and bacon this morning, the chicken was involved with your meal… but the pig… was committed!

Lost in Plato’s allegory, telecom has become the Shadowlands of regulatory jurisdiction! We’ve been duped into making distinctions without a difference. We separate telephone calls into wireline, wireless, LMR, and VOIP while applying different regulations for each. Imagine a world where solar companies argued that their service wasn’t really electricity per se… and power from wind was a new innovation and needed competitive protection in the market.

Much like Napoleon and Snowball on the Manor Farm of State Commissions, we find that some animals are more equal than others! Our Commissions must embrace All Public Utilities! What we do is important, what we do makes a difference!

We cannot continue to allow clever lobbyists and complex legislation to systematically marginalize jurisdiction over telecommunications. If not you, who will take this challenge? If not now, when will it be the right time? In our world of disaster recovery and Black Sky scenarios Unified Telecommunications is essential to our nation’s critical infrastructure.

I offer as Polonius to Laertes… To thine own self be true! We regulate water, gas, electricity infrastructure and abdicate telecommunications! This is done in a world where our children would rather give up power and water than their smartphones!

Finally, as Leonidas to Xerxes at the battle of Thermopylae … Restore jurisdiction over telecommunications in your Commissions! Tell the naysayers Molem Labe! (Come and take!).”